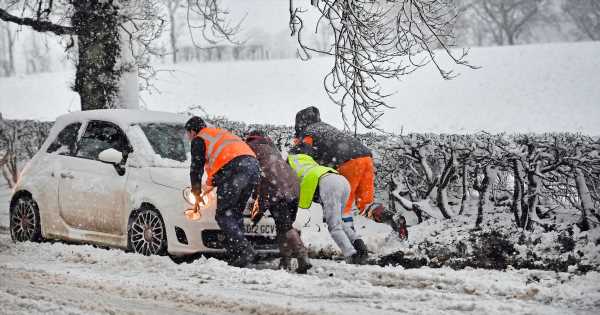 The latest weather model maps show that millions of Brits are at risk from a huge dumping of snow as we head towards a -2C Arctic plunge this weekend.

Forecasts have been teasing widespread snow towards the end of November for weeks, but now we're here the full extent of the covering is clear.

With snow naturally comes bitterly cold temperatures and according to Tom Morgan from the Met Office we will "certainly need to dig out those winter coats and scarves" this weekend.

He explained: "The whole of England and Wales will see temperatures of minus 2C to zero on Friday night.

"On Saturday it will feel bitterly cold. The wind will make it feel like it’s below freezing, around minus 1C to minus 3C."

WXCharts weather maps now show that conditions will deteriorate significantly from Friday onward as a front of snow slaloms its way from Scotland southward.

They indicate that Friday will bring between two and six inches of the white stuff to the Highlands and areas around Inverness, but even parts of northern England will see a few centimetres. As Friday turns into Saturday the vast majority of England and Wales will see wintry flurries, and by Sunday millions of Brits could be waking up to snow on the ground.

Parts of the North East will get the most in England, with two to three inches expected by Sunday.

Areas around Manchester, the Midlands, Wales, and even central-southern England will see a couple of centimetres, which could persist as we head into Monday and Tuesday.

Birmingham has been given a 70% chance of seeing snow by the weekend. Are you hoping for snow where you are? Let us know in the comments below!

Northern Ireland too isn't in the clear, with some weaker flurries forecast there for the latter part of the weekend and the start of next week.

Yellow warnings for severe gales have also been put in place, for Scotland on Friday and everyone else on Saturday, suggesting that we are in for a true Arctic storm.

Staggering wind speeds of up to 80mph are likely in Scotland this weekend.

Although, it's feared the dreary conditions won't allow the white flurries to settle on the ground.