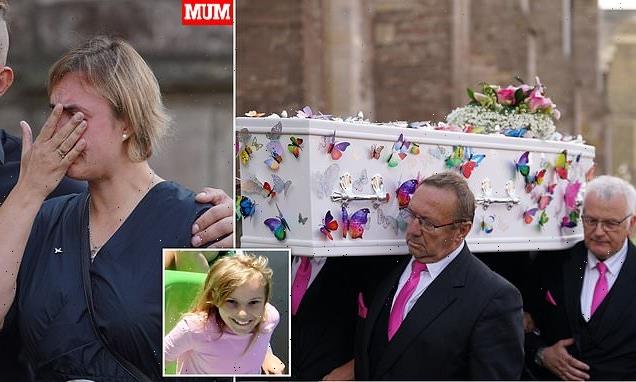 Hundreds of mourners have gathered on the streets of Boston in Lincolnshire this morning for the funeral of nine-year-old Lilia Valutyte who was stabbed to death earlier this year.

Members of the community gathered for a procession through the town which followed a white and pink horse-drawn carriage carrying Lilia’s coffin.

A video shared online shows a white coffin, covered in colourful butterflies and flowers, being carried into St Botolph’s Church by four men. Behind them followed a long line of mourners all dressed in black.

Following the church service a family-only burial will be held. 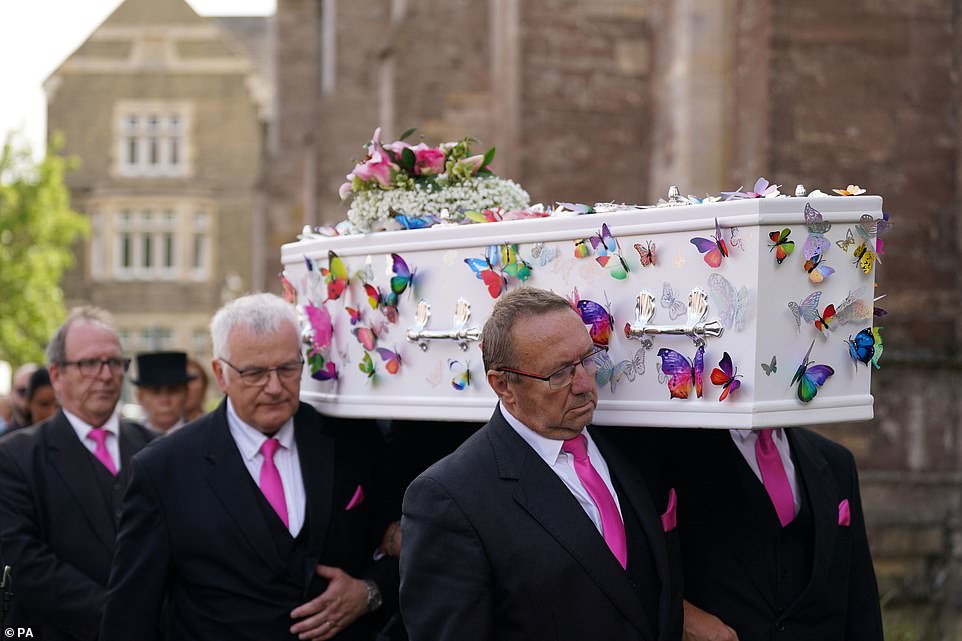 The coffin of nine-year-old Lilia Valutyte being carried into St Botolph’s Church in Boston, Lincolnshire. The young girl was stabbed to death on the streets outsider her mother’s embroidery shop while she was playing with her five year old sister 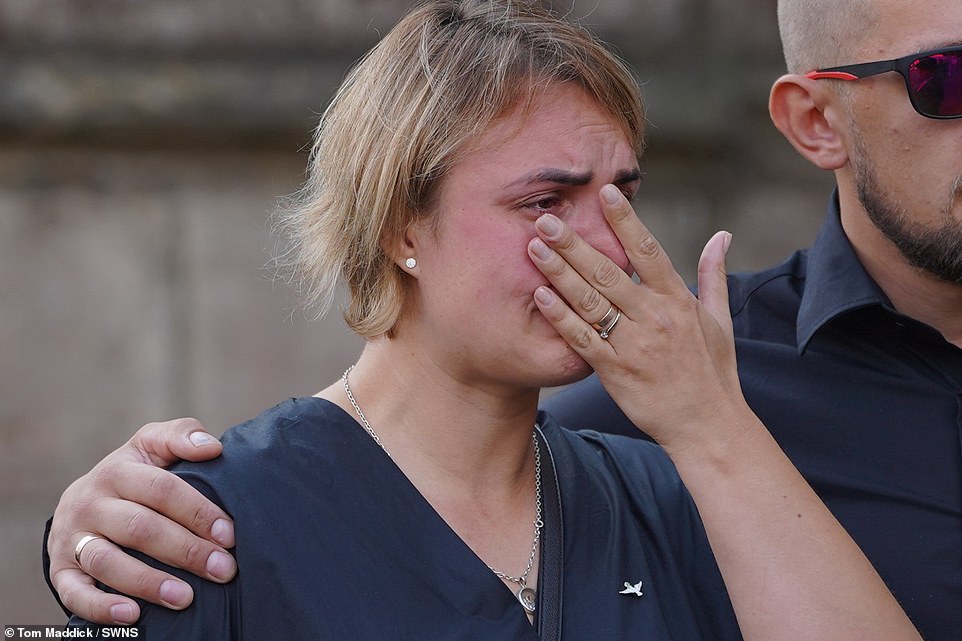 Lilia’s mother, Lina Savicke, 35, was seen wiping tears from her eyes outside the church in Boston ahead of the funeral service being held for her nine-year-old daughter 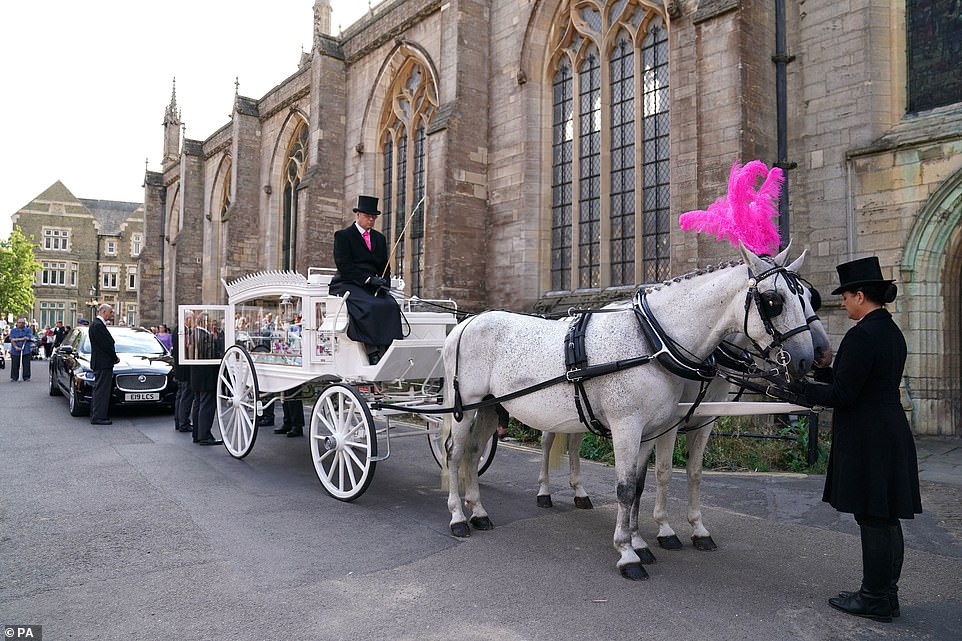 A horse drawn carriage carrying the coffin lead the procession through the town in Lincolnshire. Hundreds of mourners then followed the coffin into the church 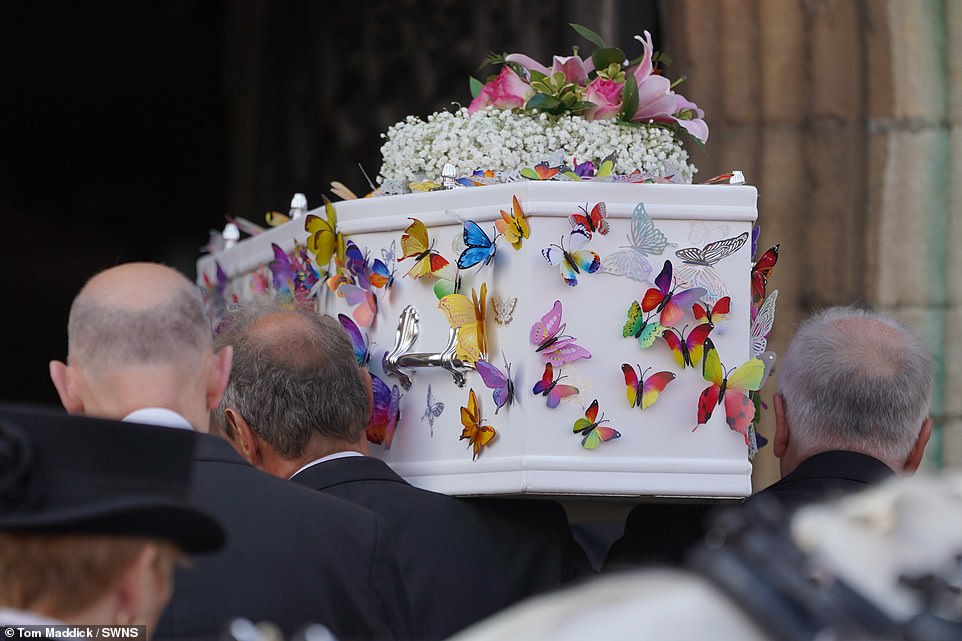 The white coffin, covered in colourful butterflies and a pink and white wreath was carried into St Botolph’s church this morning. The service will be followed by a private burial where only family will attend

Hundreds lined the streets of Boston as the coffin was taken over Tower Bridge, through Market Place and along Church Street before arriving at the church, known to locals as Boston Stump.

Lilia’s mother, Lina Savike, 35, could be seen wiping her tears away as she followed the cortege into the church ahead of the service.

One mourner, Magdalene Lowe, 78 said: ‘I’m very sad and I wish there was more I could do. Just come here helps.

‘We are all thinking about and her family. If you ever need help, we are there for you.’

Another mourner, Laura Dutkuti, 34, added: ‘I’m not feeling well because I have a son who is just 10-years-old.’

Lilia was found with stab wounds outside her mothers embroidery shop on July 28, where she had been playing with her five-year-old sister.

Footage has shown the moment the youngster was playing with her five-year-old sibling on a street in broad daylight with a hula hoop – which the pair often did while their mother was at work – before Lilia was attacked just ten minutes later.

Police officers were seen running over to Lilia with first aid bags in a desperate bid to save her.

Paying tribute to her daughter last month, her mother said: ‘Lilia was grown in that street, every week she spent down there playing, and it happened next to the window.

‘The memorial is a way for her to still be there, and we’re now fundraising to get it. It’s hard to know what to say.

‘She loved to dance, travel and try new things, and annoy her sister. She wanted to go to Italy, so we will probably go anyway next year.

‘There are so many things we could say, but we are not going to talk a lot about who she was and share those stories from our home; they are ours and we want to keep them for us.

‘You find yourself looking for her everywhere. We had four corners and now one is gone.’

Lilia’s stepdad Aurelijus Savickas, 32, added: ‘She was cheeky; quiet in one way and then other ways she wasn’t. She always tried to make fun.’ 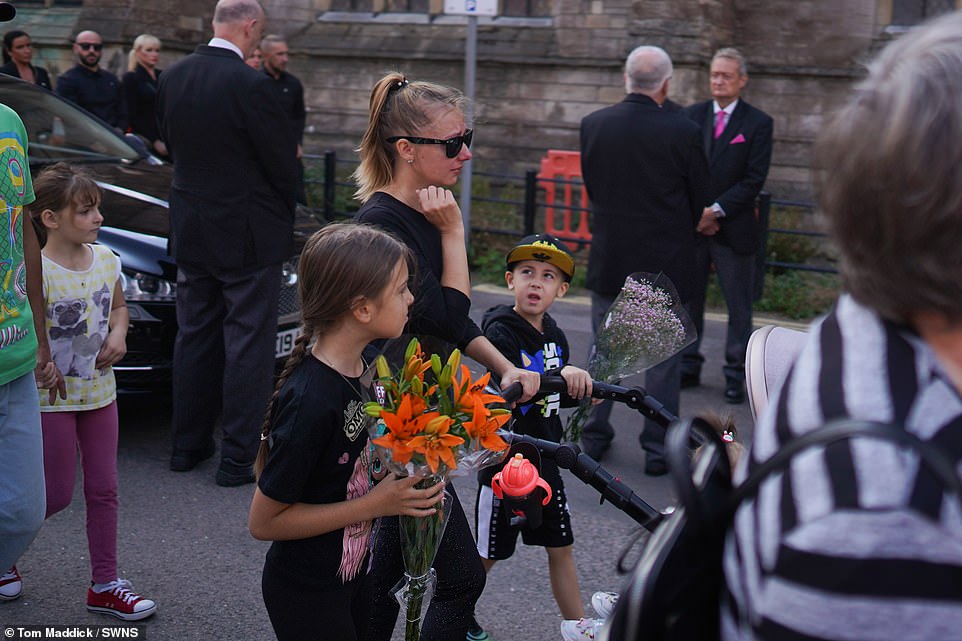 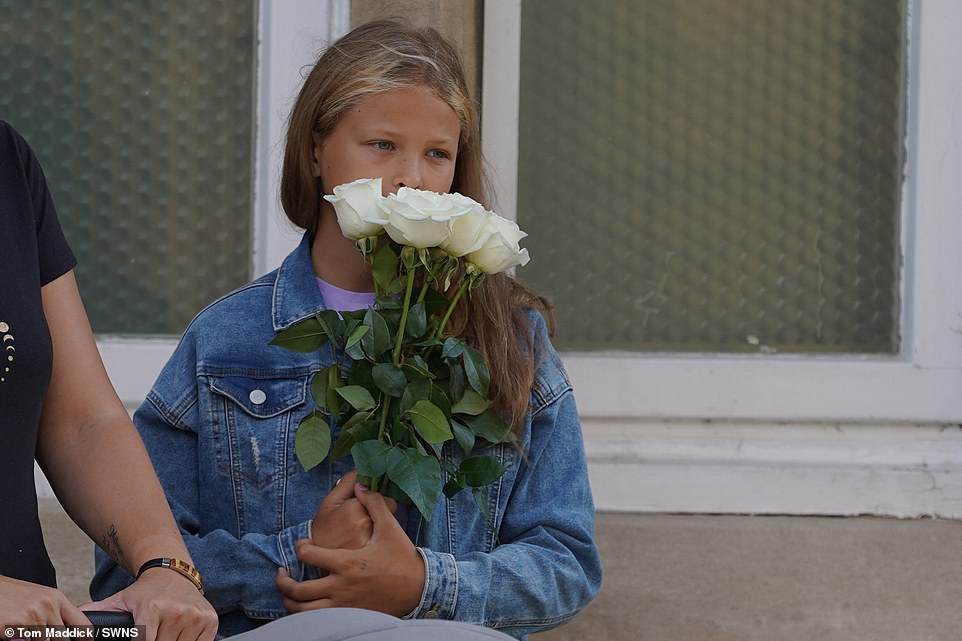 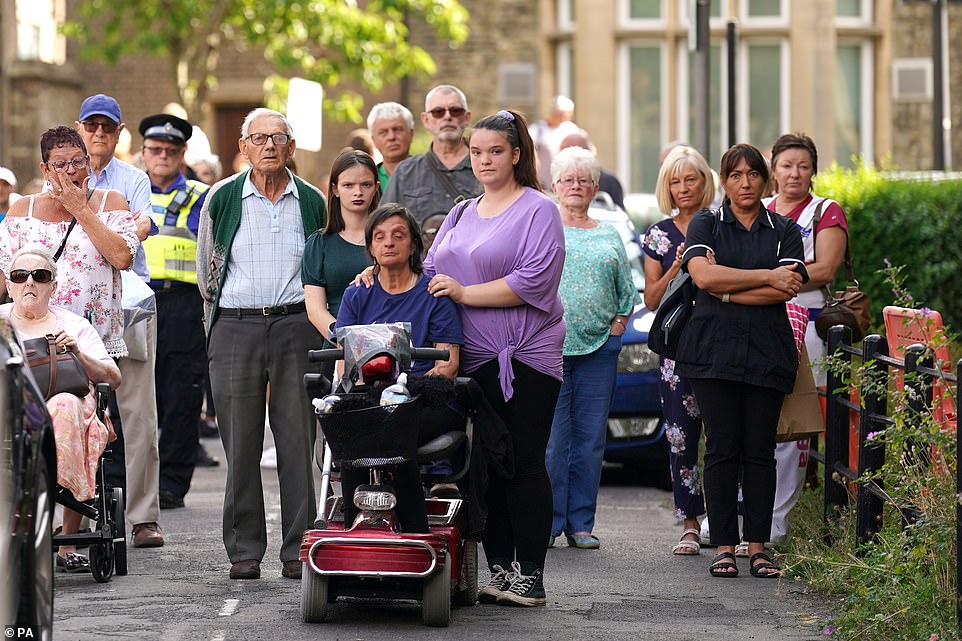 Members of the community gather in Boston to watch the coffin being carried into St Botolph’s Church in Boston, Lincolnshire 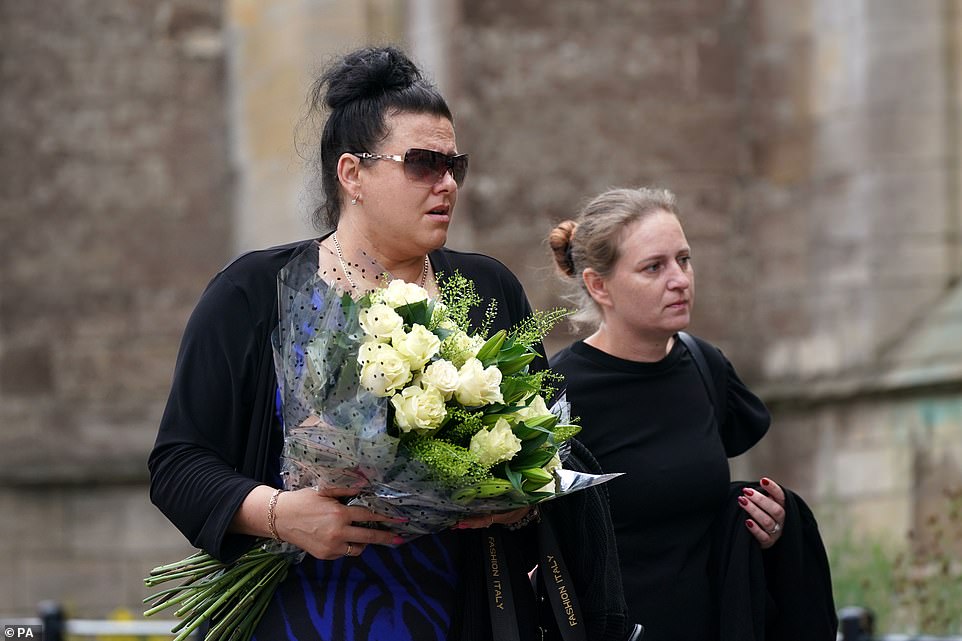 Hundreds of mourners gathered outside St Botolph’s Church in Boston, Lincolnshire. Lithuanian fruit picker, Deividas Skebas, 22, has been accused of stabbing the nine-year-old to death

Lithuanian fruit picker, Deividas Skebas, 22, has been charged with the murder of Lilia. He has not yet entered a plea, and is due to appear again before Lincoln Crown Court next month.

He was reportedly recently ‘beaten to a pulp’ and stabbed with a makeshift ‘shank’ knife during a violent attack by another inmate while on remand at Category A prison HMP Wakefield, West Yorkshire.

Skebas is said to have been discharged from hospital, the day after the assault.

A Prison Service spokesperson said: ‘A prisoner at HMP Wakefield was treated in hospital for injuries following an assault by another prisoner.

‘We are unable to comment further while police investigate.’

Skebas is next due in court for a case for a plea and trial preparation hearing on September 19, when a provisional trial date will be fixed.

An inquest opening heard Lilia, who was born in Boston to a Lithuanian family, died from a single stab wound to the chest and was identified by her stepdad.

Lilia’s death has prompted an outpouring of grief in a town known for its large Eastern European community.

A family friend described Lilia as ‘a nine-year-old angel’ and ‘one of the most beautiful creatures’, adding: ‘None will feel her mother’s pain. The girl was a ray of the sunlight, just like her parents, who were the main helpers of our community and school events. The pain is unspeakable. We are devastated at this shocking news! Rest in peace, little angel.’ 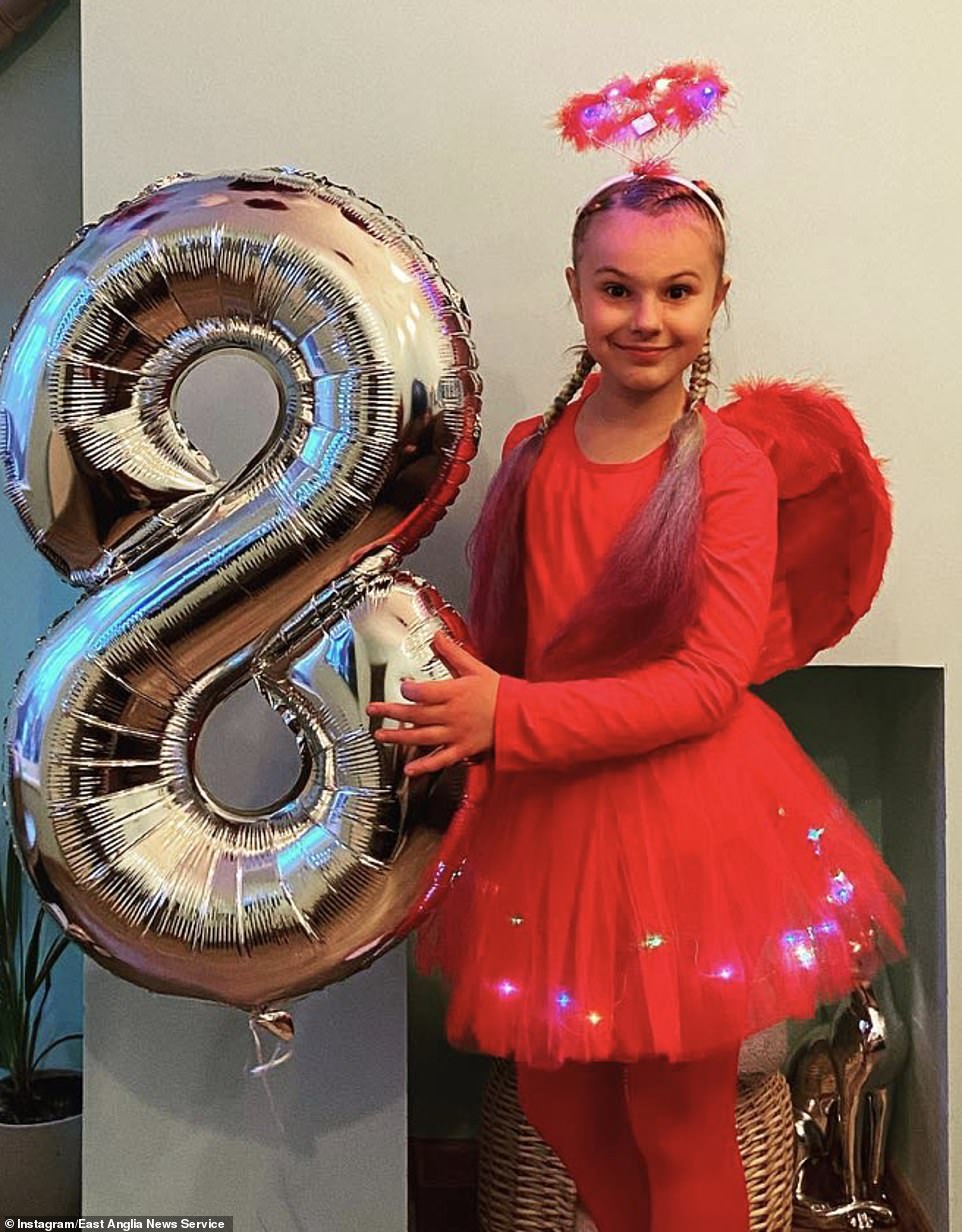 Lilia was found with stab wounds outside her mothers embroidery shop on July 28, where she had been playing with her five-year-old sister. Lithuanian fruit picker, Deividas Skebas, 22, has been accused of stabbing the nine-year-old to death

Skebas came from the industrial city of Utena in north-east Lithuania, where members of his family still live. A property overlooking Boston’s Central Park was searched by forensic officers over the weekend.

Chief Superintendent Martyn Parker described Lilia’s murder as ‘heartbreaking’, adding that the case ‘has affected many people in Boston, and further afield’.