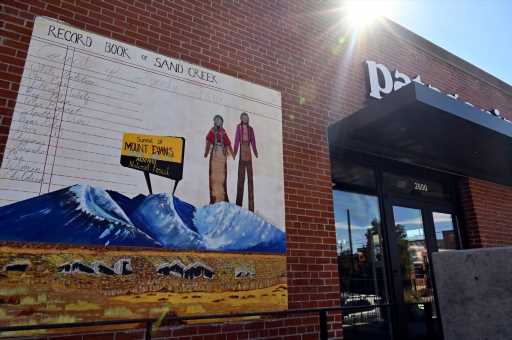 When Sarah Ortegon was painting a new mural on the side of the Patagonia store in River North, passersby had a lot of questions. They wanted to know why she had crossed out the name Mount Evans in her painting and replaced it with the words “Mount Blue Sky.”

“It intrigues people,” said Ortegon, an artist, dancer and actor who unveiled the mural, titled “What’s in a Name,” on Saturday in conjunction with Patagonia and the River North Art District. “So I feel like it is a way to teach people about the history of Colorado without having to get a book to read.”

Few people who grew up in Colorado need a book to tell them about 14,271-foot Mount Evans. Most have either driven to the top, driven by it or simply gazed at what is the closest fourteener to Denver, one that is visible from just about anywhere from Fort Collins to Colorado Springs.

But not everyone knows about the Sand Creek Massacre, a murderous U.S. Army-led rampage against a peaceful group of native Cheyenne and Arapaho that took place in 1864 during the watch of then Colorado territorial Gov. John Evans, who the mountain is named for. Not only did the troops kill 230 people — many of them children, women and the elderly — they also mutilated corpses afterward and paraded the remains through Denver.

Evans was forced to resign as governor as a result of the massacre, but his legacy was framed in a much more positive light in the following decades. That changed in 2014, when two university studies concluded that at a minimum “he bore some share of the responsibility for the attack,” according to the Colorado Encyclopedia, which is maintained by History Colorado. Many others, including descendants of the victims, believe he had a much more active role in it.

As a result, an effort to change the landmark’s name is gaining momentum. In March, Clear Creek County approved a change. Then, last week, a group of Native American leaders made their case to Colorado’s Geographic Naming Advisory Board. There are six suggested replacements, but the leading candidate is Mount Blue Sky, a name that comes from the Arapaho word “Hinono’eino,” which translates to Blue Sky People — what the Arapaho people called themselves.

(Some tribe members would prefer a different name, but Blue Sky has the most support.)

The 8-foot-by-8-foot mural, at 2600 Walnut St., shows two large doll-like Native American characters standing above the mountain. Below is a depiction of Sand Creek, a national historic site located near the town of Eads. And alongside the characters is the familiar state U.S. Forest Service sign reading “Summit of Mount Evans.” But in the mural, the words “Mount Evans” have been crossed out and replaced by “Mount Blue Sky.”

To the left, the names of some of the people who were killed at Sand Creek are written in gray on a lined sheet of paper. Ortegon said this represents the ledgers that the U.S. government used to record the names of tribe members so that they could be forcibly moved to reservations. But it is also a reference to “ledger art,” a style that took hold on reservations after tribal artists were no longer able to paint on animal hides and used paper instead. “There is a lot of ledger art that is part of Native American artwork,” Ortegon said.

Patagonia recruited Oregon, who is a member of the Northern Arapaho tribe (and has Eastern Shoshone ancestry as well), to create a mural for the store, telling her she was free to paint whatever she liked. Originally, she only planned to paint the mountain and Sand Creek, but then she had a dream where she was driving through the mountains and came across enormous Native American dolls, so she decided to add them.

The timing of the unveiling was fortuitous, Ortegon said, since it was just days after Indigenous People’s Day on Oct. 10 and the Oct. 11 meeting of the Geographic Naming Advisory Board. It also comes just a month after U.S. Secretary of the Interior Deb Haaland approved the renaming of 650 places around the country that used terms that are offensive to Native Americans.

Over the next few months, the advisory board will continue to meet, hearing more testimony from people with thoughts about a possible name change. If the board eventually decides to recommend a change, it would go to Gov. Jared Polis. If he signs off as well, the issue would then be forwarded to the U.S. Geological Survey’s U.S. Board on Geographic Names.

Ortegon isn’t a part of the group that is pushing for the Mount Blue Sky name, but it’s the name she would like to see. “To be able to raise my son, to love him, to cherish him,” she wrote in a recent Instagram post, “fills me with a sense of triumph from what they tried to do to us.”