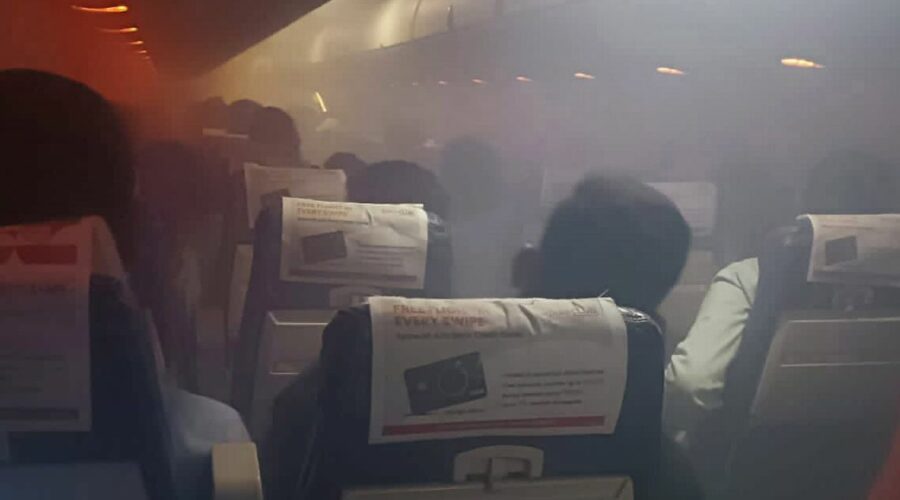 Petrified passengers were left struggling to breathe for 25 minutes after smoke filled an aeroplane cabin.

The shocking scenes were captured on video aboard the jet after it had taken off from the popular Indian holiday resort of Goa, the Daily Mirror reports.

As smoke alarms emit loud beeps in the clip, a woman can be heard repeatedly shouting "bend down, stay down" as she also shines a torch to assists travellers on the SpiceJet flight SG 3735.

One of the passengers, Vivek Vishal, claimed: "SpiceJet risks people’s lives. We were choking for 25 minutes and even oxygen masks didn’t deploy. Strict action should be taken against such a negligent airline." In another clip, multiple ambulances are shown at the rain-heavy scene, as a man can be seen speaking on the phone.

Members of the crew with hi-vis jackets are spotted waiting at the side of the runway with wheelchairs in preparation for assistance.

It’s believed at least 86 people were on board the aircraft, which had to carry out a full emergency landing due to the malfunction.

According to local reports, passengers were soon evacuated after the landing in Hyderabad, India, where the pilot informed air-traffic control about the incident.

Ground staff were asked to put all precautions into place, in a bid to avoid any further incidents.

It’s been reported that crew on board told passengers to "start praying" due to the panic-inducing ordeal – claims that a spokesman for the airline has denied.

But another passenger, Srikanth Mulupala, alleged: "The crew members told us to pray to God and pray for our families – it was mortifying. Many of my co-passengers panicked and started shrieking."

One of the passengers, who has not been named, also claims that the crew snatched his phone and forced another passenger to delete any pictures and footage of the incident.

SpiceJet claimed that the smoke was due to the on-board air conditioning system and that their crew handled the situation as per the protocol.

However, another passenger, named in Indian media as cAnil P, claims that something went wrong in the bathroom: "We heard the crew talk in hushed tones after something happened and, in another 20-odd minutes, the smoke was all around us.

"We felt like choking. However, the lights were turned on and the crew asked us not to leave our seats and stop talking."

The airline is already facing disciplinary action by the Directorate General of Civil Aviation (DGCA) due to eight recent aircraft-related incidents.

Now, the DGCA has extended the 50% capacity cap on SpiceJet flights.