From the time then-prime minister Gough Whitlam set foot in China during the early 1970s to establish diplomatic relations, Australia's ties with the country have been largely based on mutual self-interest.

In Australia, Beijing found an ideal partner able to provide it with the raw materials to power its transition from a poverty-stricken, insular communist state into a global powerhouse of authoritarian capitalism. Meanwhile, Australia's mining boom filled government coffers and, along with the proceeds from a steady stream of Chinese tourists and students, helped buttress decades of continuous economic growth. 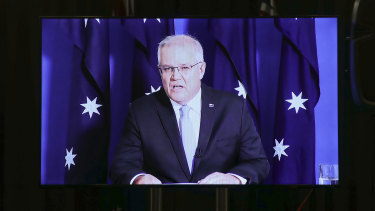 Prime Minister Scott Morrison called for a reset in Australia-China relations after China’s Foreign Affairs Ministry posted a fake image of an Australian soldier holding a knife to the throat of an Afghan child.Credit:Alex Ellinghausen

There was also a more principled motive. Australia, along with many Western nations, hoped that welcoming China into the club of global trade and diplomatic institutions would encourage it to liberalise its economy, and possibly even its political system. As history has shown, while China was happy to trade with the world, its political leaders had no intention of loosening their grip on power.

Chinese President Xi Jinping has been a case in point, entrenching his authority at home and expanding Beijing's influence globally. But growing influence has been matched by an increasing sensitivity to criticism and a willingness to strike out when China perceives its interests are threatened.

Australia is feeling the full force of that attitude today. The Chinese Foreign Affairs Ministry's  fabricated tweet this week depicting an Australian soldier holding a knife to the throat of a child in Afghanistan made that clear. While China has up to this point largely used trade sanctions as a proxy for expressing its displeasure with Australia, this dispute was never going to be resolved at the World Trade Organisation.

If anything, the tweet and China's recent public release of its 14 grievances with Australia have been useful in that they have finally made Beijing's intentions transparent.

Three years ago, Australia banned foreign political donations, with a warning over Chinese attempts to influence Canberra politics. The following year Canberra antagonised China again by banning tech giant Huawei from Australia's 5G network, and things only got worse this year when Australia lobbied for an inquiry into the origins of the new coronavirus. The retaliation has been gradually building.

China is well versed in these tactics. Norway faced Beijing's wrath after the Nobel Peace Prize was awarded to imprisoned Chinese dissident Liu Xiaobo in 2010. Diplomatic relations were put in the deep freeze and Norway's salmon exports were dramatically curtailed.

South Korea faced Beijing’s anger in 2016 when it installed a US-developed missile defence system to protect itself against North Korea. Concerned about the system's impact on China's strategic influence in the region, Beijing punished South Korea to the tune of billions of dollars with restrictions on trade until Seoul agreed to make concessions.

What does Australia do in the face of such intimidation?

It should firstly remember that China's political spat with Australia will not always translate to the Chinese people. A recent report from a Hong Kong investment firm revealed that most Chinese still love Australian products. There is optimism that students will return to Australian universities and tourists will come back once the international borders reopen.

Australia is also garnering strong support from is allies. It is no small thing that Jake Sullivan, US President-elect Joe Biden's choice as national security adviser, tweeted this week that "America will stand shoulder to shoulder with our ally Australia and rally fellow democracies to advance our shared security, prosperity, and values." Britain and New Zealand have followed suit.

Prime Minister Scott Morrison needs to tread carefully. China has become a global power to be reckoned with. It's essential that Australia stands its ground without adding fuel to an already volatile dispute.