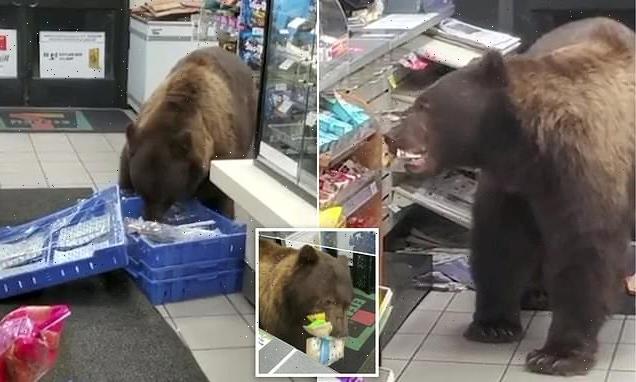 Just grabbing the bear essentials: Enormous brown bear wanders in to a California 7-Eleven and feasts on candy bars as helpless worker watches on

This is the moment a hungry brown bear entered a 7-Eleven store and began helping itself to candy bars, leaving the helpless cashier staring as the store was robbed.

Cashier Christopher Kinson, 54, was working a nightshift at the store in Olympic Valley, California, when he saw the door open — but no one entered.

It was 1:30 am on September 6 when the cashier then looked down and spotted the brown bear helping itself to late-night snacks.

‘Initially I was surprised. I see the door open, and I don’t see a torso and I am like “oh my god… It’s a bear”, said Christopher, who is originally from Wisconsin.

Christopher stood behind the counter and watched as the bear raided the local store multiple times, attempting to lock the door with a bin liner and then with a mop. 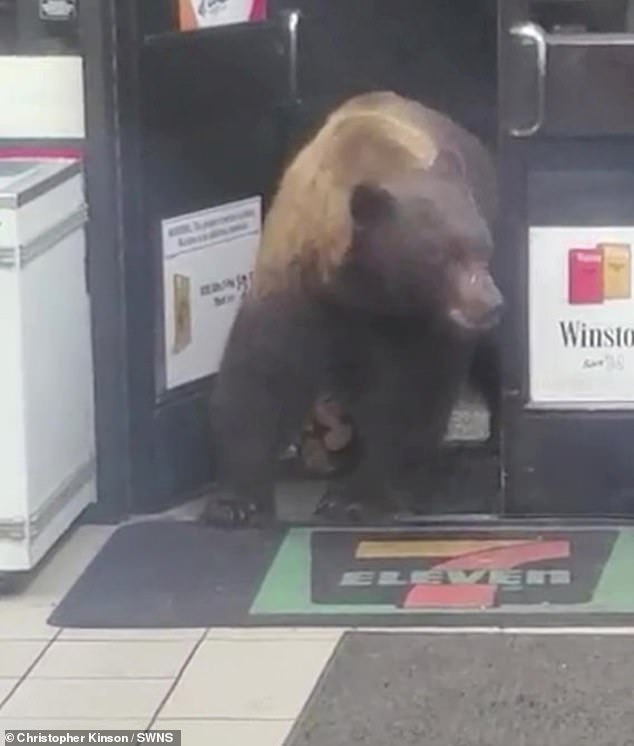 Hello! A brown bear strolled into a 7-Eleven in California and began helping itself to the snacks while the cashier on duty recorded and shouted at it to leave 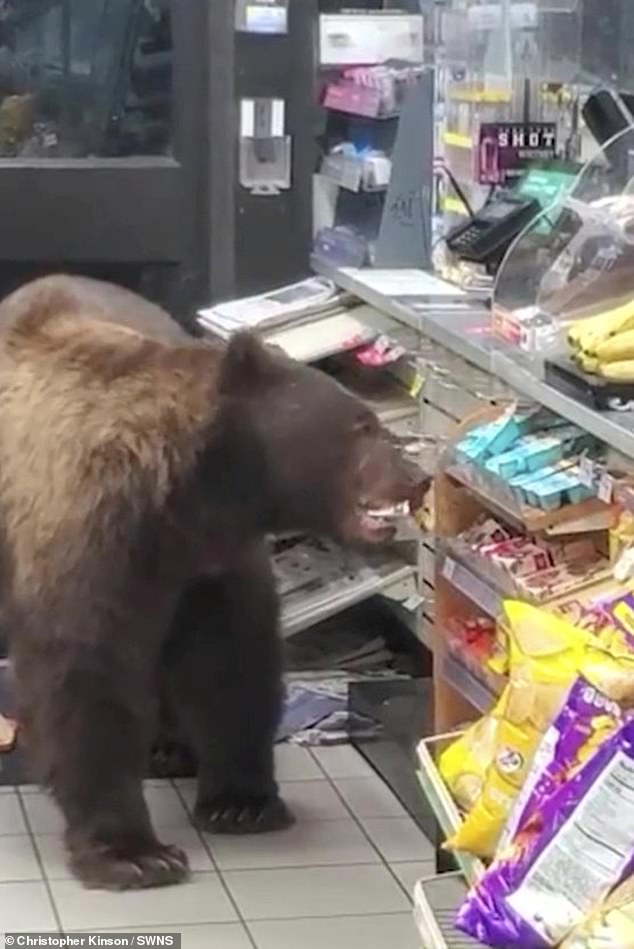 But the bear wasn’t to be deterred, coming back for seconds and even thirds as it enjoyed the tasty treats — rummaging through the packages on display 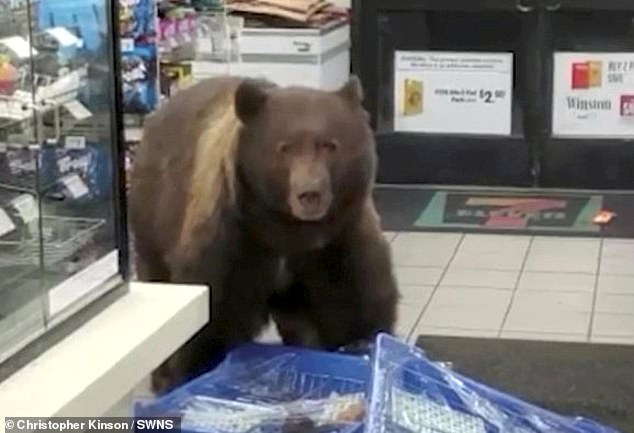 A one point, the cashier blocked the door with a broom handle and also tied the door up with what looks like a garbage bag, but it didn’t seem to keep the hungry bear away

He said: ‘I always kept my distance and I had the back door near me so I could escape if it charged me.

‘I was scared initially, but they just want to eat. You always have to be careful though. We don’t know how exactly they are thinking.

The bear hilariously took the chocolates one or two at a time during his forays into the store, in a way that looked similar to how an actual customer would.

Christopher added: ‘It’s funny. It’s like it was purposely polite to take one candy bar at a time, it’s almost like it had manners.’

The curious bear came back multiple times before leaving again for half an hour.

This is when Christopher jumped on the opportunity to block the door.

The cashier blocked the door with a broom handle and also tied the door up with what looks like a garbage bag, but it appears he couldn’t keep out the fuzzy intruder for long.

He added: ‘It came in, sniffed around, then scooted out. Once it got the food that it wanted and it scooted right out the door.

‘It grabbed [the food], went out for two or three minutes and came back. It came in two or three times and then left for 30 minutes so that’s when I blocked the door.

‘You don’t want to become their source of food.’ 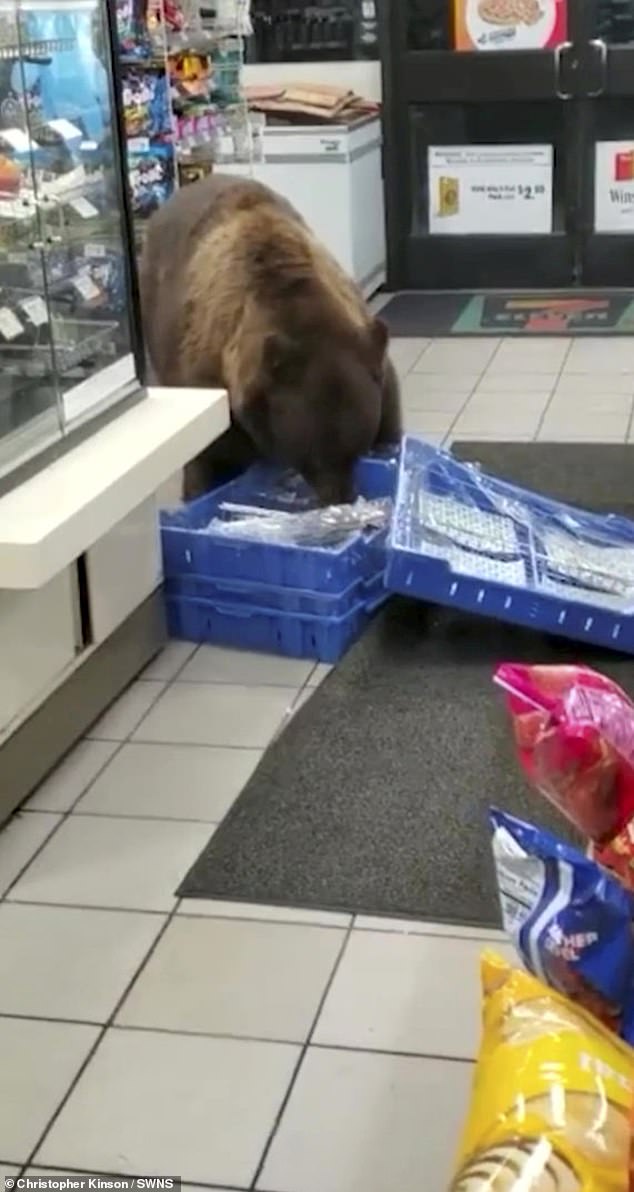 The gentle bear didn’t pose much of a threat to the shift worker, said 54-year-old Cashier Christopher Kinson who was working at 1:30am when the fuzzy intruder arrived, but he still had to be careful not to get in the bear’s way 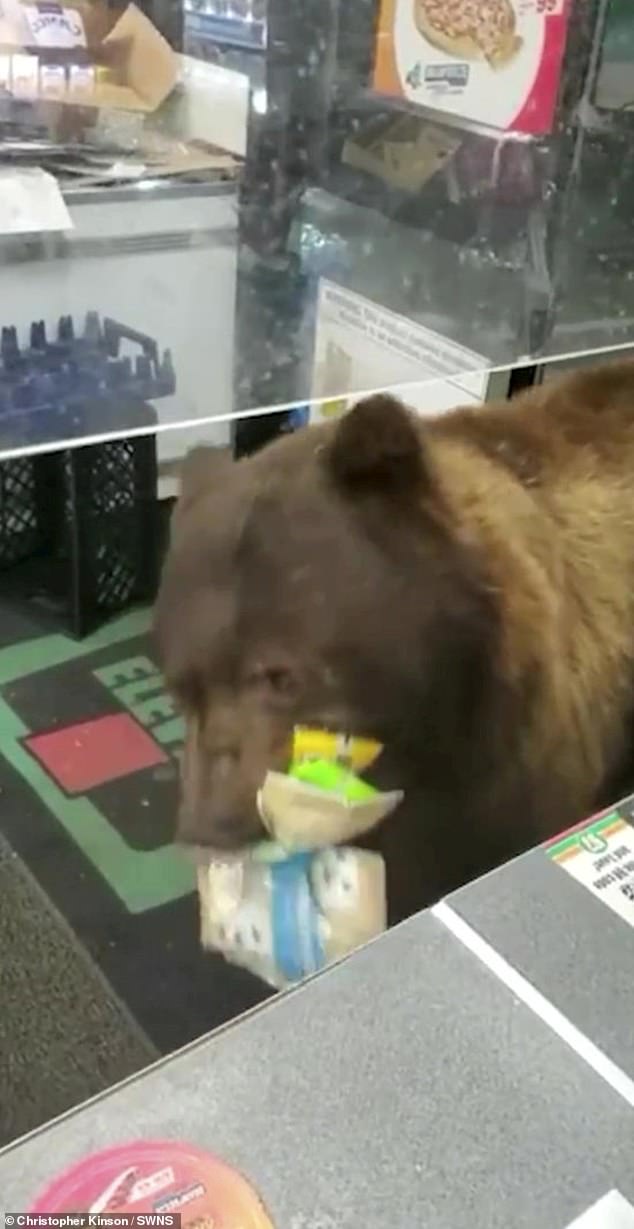