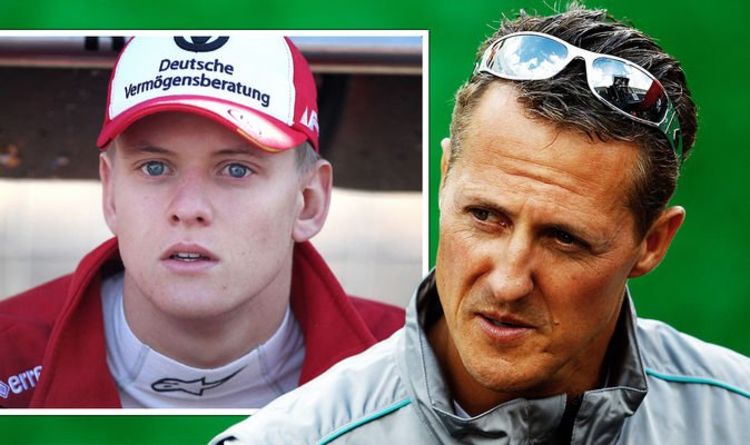 F1 legend Michael Schumacher, who retired from the sport in 2002 after winning a record seven world titles, suffered a serious head injury after falling and hitting his head on a rock while skiing with his son Mick Schumacher in the French Alps in December 2013. He was wearing a helmet at the time and survived the horrific accident. But there have been very few updates on his condition since, with the sporting legend’s family choosing to keep those details private from the public.

However, a documentary was released on the Netflix streaming service towards the end of last year, detailing Michael’s incredible successes in motor racing.

Mick also appeared in the documentary along with other members of his family.

But the young German, who now races for the Haas team in F1, admitted it was extremely difficult for him to watch the documentary.

He told German newspaper Frankfurter Allgemeine: “They focused on showing the human side of my father, in addition to his successes.

“I think it is very good. But, at the same time, it is very hard for me to see it.

“That shows how much feeling there is in this film and how many emotions it evokes.”

Mick Schumacher entered F1 as a rookie only a year ago when he was one of two drivers confirmed for the Haas team.

His father Michael is one of the greatest ever drivers to sit in the cockpit of an F1 car, winning a record seven world titles – two with Benetton followed by five with Ferrari.

But despite having such big shoes to fill in the sport, Mick is clearly not afraid of the comparisons.

He paid huge tribute to his father for the successes he achieved, praising his high work ethic, energy, strength and concentration levels.

Mick said: “I have maximum respect for what my father achieved, all his hard work to achieve his victories and titles.

“Nothing was provided for him. The energy and strength he taught, his concentration, always giving 100% at work.

“It impresses me. I think I have something of that too.

“I do not usually compare myself with others.

“I prefer to go on my own. But I do look for comparisons with my father.”

Following his horrific accident on the French Alps ion December 2013, Michael Schumacher was air-lifted to hospital in nearby Grenoble before undergoing two rounds of surgery.

The F1 legend was then placed in a medically induced coma for six months.

Schumacher has since returned to his home in Lake Geneva.

There, he has reportedly received around-the-clock care since 2014 from his wife Corinna and a specialist team of medical professionals.