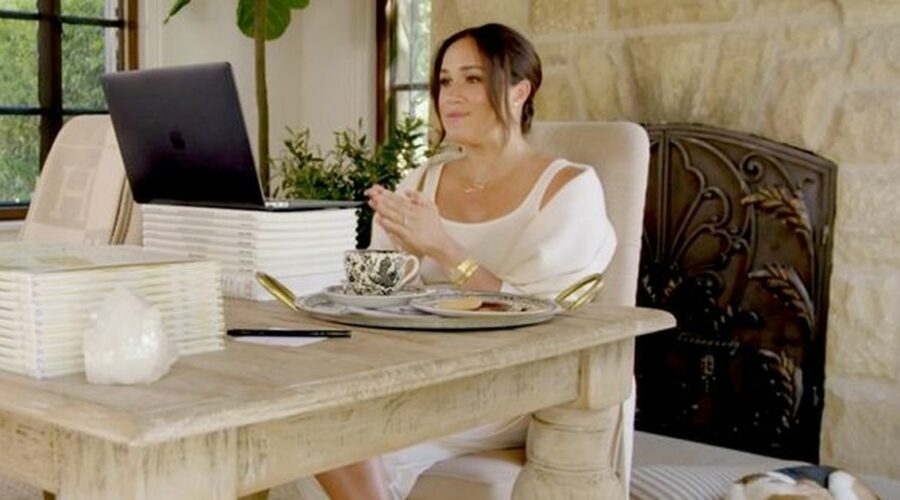 Meghan Markle is no doubt set for a day of celebration when she turns 41 on Thursday (August 4) but it was her desk last year which stole the show in her video message.

As the Duchess of Sussex prepares for another journey around the sun, royal fans and Meghan supporters alike might think back to her previous birthday, where she shared a video message launching her 40×40 initiative – an Archewell program that aims to get women back into the workplace with support from other women.

To announce the exciting venture, the former senior royal was seen sat at a table complete with tea and biscuits as well as copies of her then-new book, and the former Suits star was even joined by actress Melissa McCarthy to launch the initiative.

READ MORE: Sussexes not repaying 'sweet' birthday wishes to Meghan is 'nothing personal' to royals

But the clip also contained some more hidden features, including the bizarre set-up of her table and adorable but subtle tributes to her much-loved kids.

One thing eagle-eyed fans noticed was her makeshift laptop stand – comprised of copies of her book, The Bench.

In the video, a stack of large copies of the book can be seen piled up in front of – and underneath – Meghan's laptop, prompting critics to wonder why she didn't have a proper set-up.

One Twitter user said: "Don't they have enough money to buy a proper laptop stand that she has to use her lousy unsold books instead? Out of my sight!"

Another added: "Thinking about Meghan Markle not having a stand for her laptop and using a stack of books."

Meanwhile a third noticed another blunder, commenting: "There is a ghost in the window!" in reference to the appearance of a slightly bemused-looking Harry in the background of the campaign-launching clip.

And Harry wasn't the only one photobombing during the video, with the couple's adorable dog sitting comfortably in the background.

But it wasn't all criticism for the ex-royal as fans spotted what seemed to be a picture of Lilibet in the background of the video – before images of the tot had ever been released.

While the image wasn't clear, excited fans of the Sussexes were ecstatic to believe they might have finally caught a glimpse of the recent new addition to the family.

One fan said: "I like to think that on the three photos joined, the one in the middle is a photo of Harry holding Lili."

Whether Meghan will launch a similar campaign for her 41st birthday is unclear, but it's almost certain fans will be keeping an eye out to see what her next move will be.