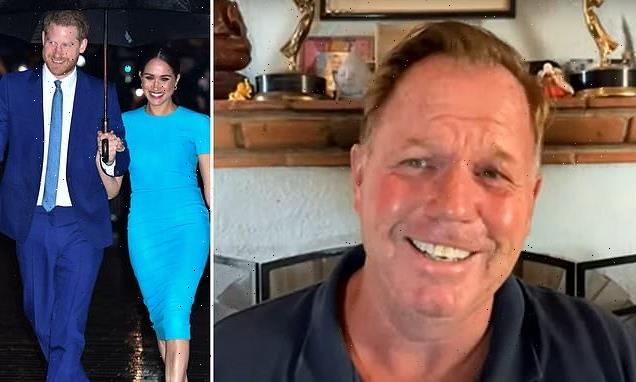 Meghan Markle’s half-brother has lashed out at her and Harry, saying they should ‘stay out of politics.’

Thomas Markle Jr, 56, also criticised Meghan for not contacting their father after he suffered a stroke in May which left him hospitalised for five days.

Their father, Thomas Markle Sr, 77, lost his speech in the stroke and is still recovering.

He made his first public appearance since then in an exclusive video on GB News as host Dan Wooton interviewed Thomas Jr.

Thomas Jr was upbeat about his father’s condition, saying he was making strong progress in recovering his speech.

He said: ‘Dad is doing amazing. There’s a lot of work to do but every single day is just another milestone progression… in the right direction, which is ultimate recovery on everything. He’s doing fantastic.’

However, when asked whether half-sister Meghan had been in touch about their father’s condition, Thomas Jr said: ‘Not not at all, nothing at all. Absolute zero. 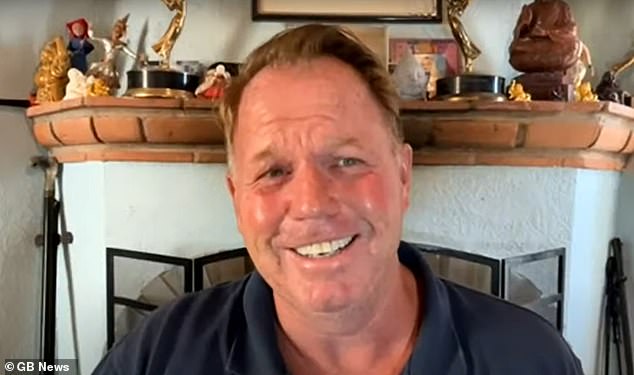 ‘What’s to be expected at this point? She didn’t call for the first heart attack or the stroke – why would she call now?

‘Obviously they’re just doing other things – other things that they deem necessarily more important than their father.

‘It’s a mystery – it does bother him continuously, but he gets through it.’

Harry and Meghan now live in their £11 million mansion in Montecito, California since giving up royal duties in 2020.

Thomas Jr mocked Harry’s wide-ranging speech on Nelson Mandela Day at the United Nations in which he spoke about climate change, the overturning of Roe v Wade in the US and the invasion of Ukraine.

Thomas Jr said: ‘You’re going to a memorial for Mandela at the UN building which is an open invitation to anybody in the general public and then you start talking world peace and politics which has nothing to do with anything there at that point.

‘The Sussexes need to stick to rescue chickens in Motecito and stay out of politics.’

In his first appearance since his damaging stroke, Meghan Markle’s father thanked the British public for their support.

In the video, Mr Markle can be seen sitting at a table overlooking a windy beach. He holds a whiteboard and pen, holding up the sign to the camera.

The sign reads: ‘Hi Dan, Thank you and the British people for the best wishes and good will’.

The retired Hollywood lighting director suffered a stroke on May 23 and spent five days in hospital.

He fell over while shopping and had to be helped to his feet just days before he was hospitalised.

After being discharged, he said: ‘I feel hugely grateful and know how lucky I am to be alive.

‘I want to thank everyone, especially the wonderful doctors and nurses who saved my life. They are angels.

‘I have been deeply moved by loving messages I’ve received from all over the world. People have been so kind. I can’t speak right now, but I am working hard and will thank people properly when I can.’

Mr Markle had been planning to fly to the UK in June to celebrate the Queen’s Platinum Jubilee, but the stroke, which left him with limited speech, scuppered the trip. 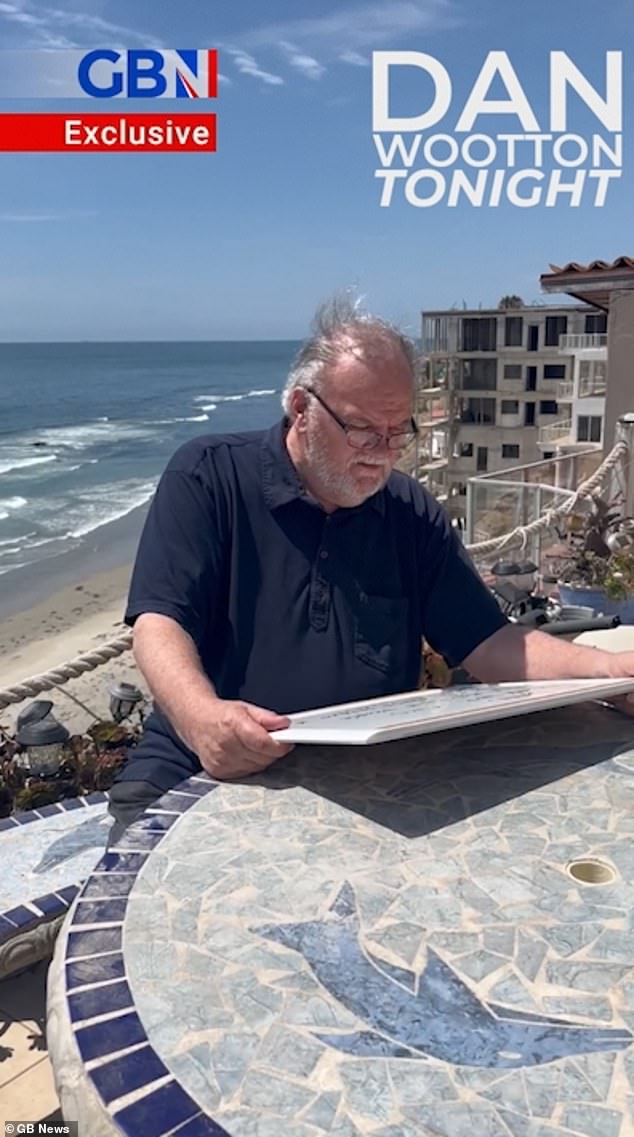 Thomas Markle, 77, appeared in the video above a windy beach in his first public appearance since his stroke in May 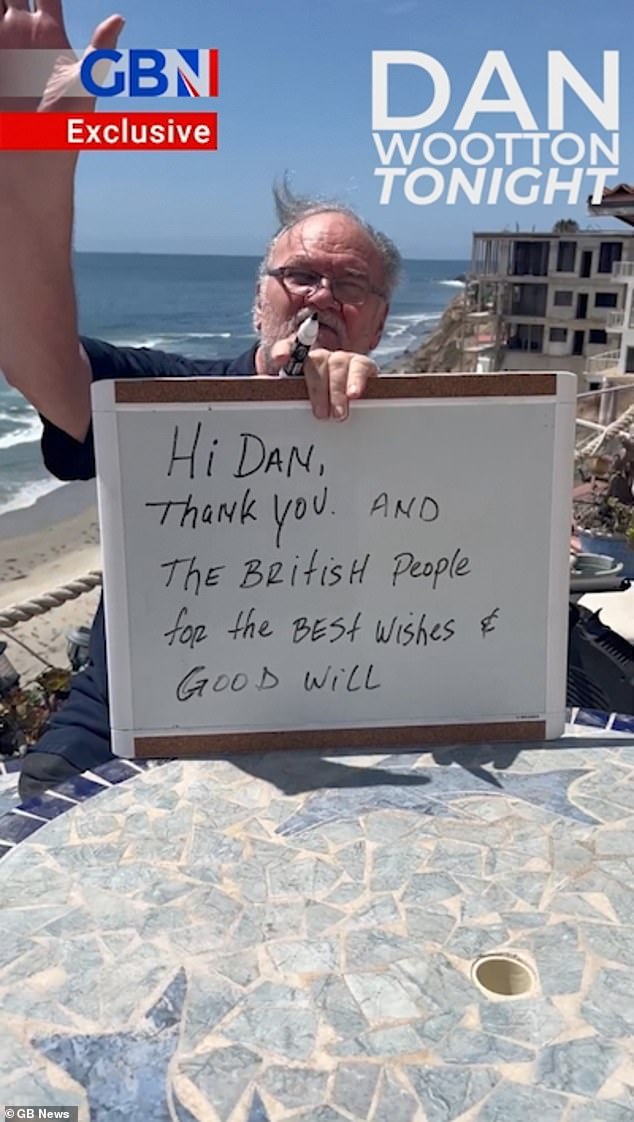 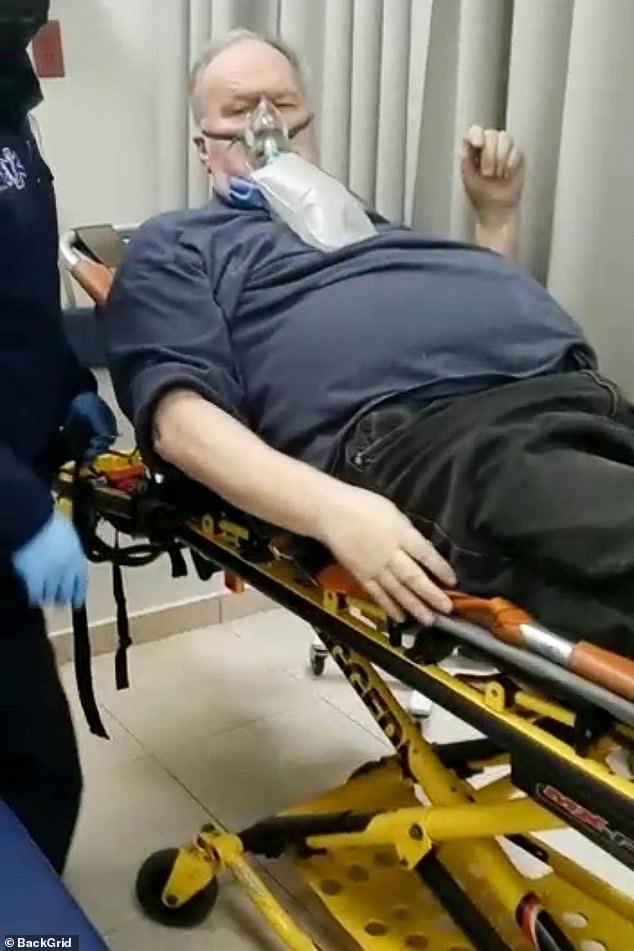 Writing on a whiteboard with a felt-tip pen at the time, he said: ‘I wanted to come to pay my respects to the Queen. I wish her a happy Jubilee and many more years.’

The severe stroke was caused by a blood clot on the right side of Mr Markle’s brain.

He was rushed to a hospital near his home in Rosarito, Mexico, before being transferred by ambulance to the US border where an ambulance was waiting to ferry him to a hospital in San Diego, California.

He has been in a critical-care ward all week and has made what one doctor told him was ‘remarkable progress’.

On leaving the Californian hospital, he was able to speak a few words, but faces what he calls ‘an uphill battle’ to regain his power of speech.

‘I have lots of hard work to do and will do it,’ he wrote. ‘I want to get well. I’m so lucky to have had amazing care and love. Thank you everyone.’

Mr Markle was be cared for by his 56-year-old son, Thomas Jr, who drove 11 hours through the night to be with his stricken father.

‘I was visiting my son and his family in Oregon when I got the call,’ said Thomas Jr at the time.

‘I will be here for Dad and do whatever it takes to help him on his road to recovery. It’s been a terrible shock for everyone but Dad is a strong man and he is determined to get well.

‘He’s already started working with a speech therapist and is making great progress. We’ve received hundreds of messages of support for him from people all over the world.

‘We are so grateful for the outpouring of love for Dad. I’m here for him for as long as it takes.’

Mr Markle’s daughter Samantha previously said that he may need a year of therapy to recover his speech after being struck down by the stroke.

His family had been worried about his high blood pressure for some time before he fell ill, resulting in him losing even the ability to tell paramedics what was wrong with him.

The 77-year-old had to write down his symptoms on a piece of paper.

Mr Markle was forced to miss his daughter’s wedding to Prince Harry in 2018 after he had two heart attacks just days before.