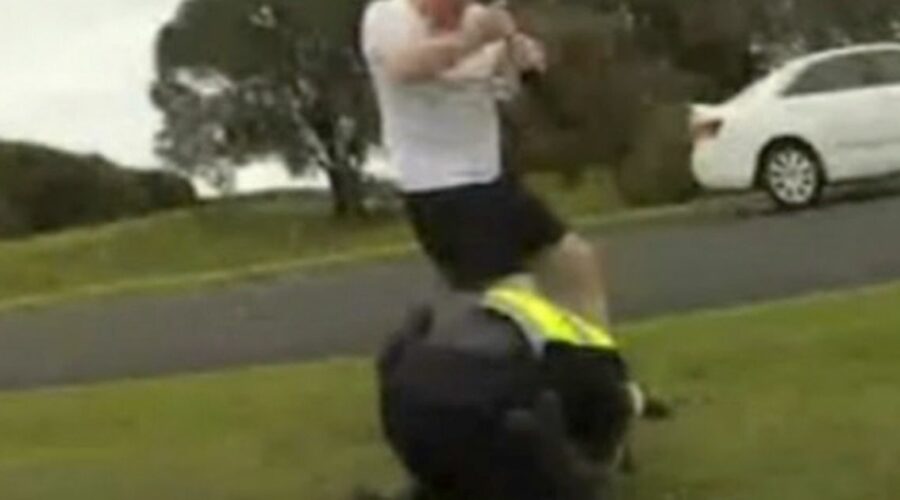 Footage has emerged of two Australian police officers being attacked by a thug with a baseball bat, with one of the cops admitting he feared for his life.

The attack, which happened last October, came after a teenage boy was being questioned for blocking traffic and not wearing a mask during the state’s period of coronavirus restrictions.

The 15-year-old-old boy could be seen asking for help on a walkie-talkie and not long after, Clearly pulled up in a white car, got out and told the lad to get off home.

The 50-year-old man was armed with a baseball bat hidden in a black sheaf and when the cops told him to back off, the youngster then suddenly tried to grab Ringin’s gun. As it all kicked off, Clearly then proceeded to batter Baldham over the head with the weapon several times, with Ringing stepping into disarm him, and using the bat to knock Clearly – who by now had picked up a discarded taser – to the ground.

As Baldham crouched on the ground with blood gushing from a head wound, Ringin then squirted capsicum spray into Clearly’s face, while both officers tasered him before he surrendered.

Clearly could be heard saying: “Gentleman. I am the King. Get your hands off me. I am the King. You are a Roman dog and this is an act of war. In the name of Lord Jesus Christ, I command you to get off me.” Clearly was taken to hospital and then to jail, where he has remained.

The video of the shocking incident was played to the County Court of Victoria on Wednesday (July 20), where Cleary pleaded guilty a string of charges, including affray, causing injury intentionally and assaulting an emergency worker on duty.

An emotional Baldham broke down after seeing the vision again. He said: “Hearing the sound I made when I’m hit is the worst bit for me.

“I didn’t know I was capable of making such a sound.

“I am convinced that without his (Ringin’s) intervention – I would have been beaten to death.” Cleary’s lawyer told the court he suffered from a delusional mental illness that he refuses to get treatment for.

He will be sentenced on Friday, where he could face up to 10 years in jail.

The boy, who cannot be named, is expected to appear in a children’s court.