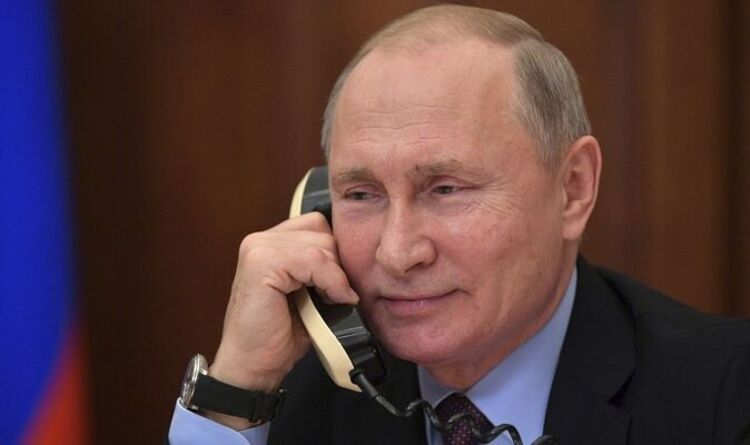 Russia cracks down on protests against Ukraine invasion

In a tactic replicating Soviet-era dictators, the Kremlin is reportedly encouraging everyday Russians to shop their close relations and associates to “inform” on “traitors” of the state.

The move is comparable to Joseph Stalin’s secret police force the NKVD – used to eradicate anyone who spoke out against the Communist Party during the Soviet era.

Stalin’s tactics saw over one million people branded “saboteurs” or “enemies of the people”, and sent to the Gulag.

Nearly 100 years later, the Kremlin is reportedly dragging Russia back to 1937 with the new telephone hotline and website expected to help the Kremlin root out dissidents.

Russian authorities are said to be sending citizens instructions via text message on how to denounce others, with those speaking out against the invasion thrown in prison.

Telegram users are also able to rat out fellow citizens using a dedicated channel on the platform.

The Kremlin’s tactics have so far led to a young 22-year-old shop assistant spending 24 hours in a cell after telling a stranger in a Moscow bar she disagreed with the war.

The woman told the Sunday Telegraph: “It was just a chit chat…he got very upset that we didn’t share his opinion and started arguing, saying that Putin and the war were absolutely right.”

The man was thrown out of the bar but less than an hour later, the Russian police had shown up and asked the woman and her friends to go outside.

She said she was thrown in a cell and fined for “discrediting the Russian armed forces”.

In one case, at a school in Penza, central Russia, pupils ratted out their own teacher after they secretly recorded her making anti-war comments.

Other Russians reported on the hotline include a woman in Siberia who decorated her tree in the colours of the Ukrainian flag, a man in Moscow who hung a Ukrainian flag from his window, and a police officer who was overheard criticising the invasion.

Alexandra Baeva, head of OVD-info’s legal department, said: “In Russia now, it is like 1937: people are scared and informing on each other.”

It is illegal for Russian citizens to speak out or even show disapproval of the invasion, and it is even illegal to call it a war as Putin continues to insist it is a “special operation”.

It comes as 176 protesters were arrested at 14 different anti-war demonstrations in Russia on Saturday, despite the Kremlin remaining eager to present the nation as being behind the invasion.

DON’T MISS:
Taiwan warns West – China threat has not gone away [INSIGHT]
Putin’s army is running out of ammo [COMMENT]
Boris in desperate bid to save leadership [ANALYSIS]

On March 16, during one of a number of Putin’s speeches, he warned “scum” traitors that loyal Russians would “spit them out like a midge that flew into their mouths”.

During the scathing rant, he said: “I do not judge those with villas in Miami or the French Riviera. Or who can’t get by without oysters or foie gras or so-called ‘gender freedoms’. The problem is they mentally exist there, and not here, with our people, with Russia.

“The West will try to bet on the so-called fifth column, on traitors… to divide our society.. to provoke civil confrontation… to strive to achieve its aim. And there is one aim – the destruction of Russia.”

Joseph Stalin used the term “fifth column” to describe anyone he believed to be against the Communist Party.

In the Orwellian-style speech, Putin added: “I am convinced that this natural and necessary self-cleansing of society will only strengthen our country, our solidarity, cohesion and readiness to meet any challenge.”