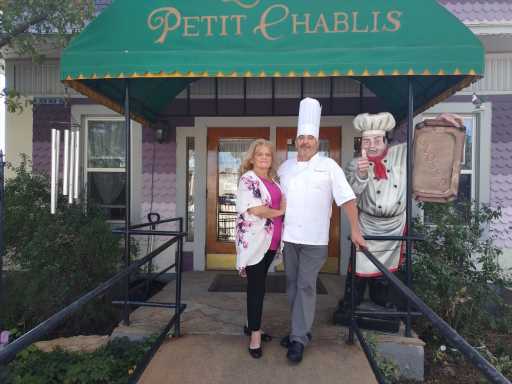 When Daniel Petit requested a business loan from local banks 36 years ago to open a French restaurant in Cañon City, he was denied by all of them.

Fast-forward to today and Petit and his wife, Michelle, are retiring from a decades-long successful run.

Their last night of service was Friday night.

“In the beginning, I don’t this town expected a French restaurant to make it,” Daniel Petit said.

After being denied by the banks in 1986, Petit’s parents flew thousands of miles from France to help remodel the 1888 Victorian home at 512 Royal Gorge Blvd. They did everything from wallpapering the ceilings to helping them out financially to get their doors opened.

“If they wouldn’t have helped me, I don’t think the restaurant ever would have been here,” Petit said.

The restaurant has been known for romantic dinners, special occasions and business lunches.

Petit became a cooking apprentice at age 15 and received a degree in Professional Cooking before he was 19. He began his career in 1979 working for Club Med, previously known as Club Méditerranée, in Tunisia, Senegal, Bahamas, Italy, France, Cancun, Mexico, and finally at Copper Mountain in Colorado. He then worked at Le Central Restaurant in Denver and at Cheyenne Mountain Country Club in Colorado Springs before deciding to open Le Petit Chablis in Cañon City.

Once word got out about the restaurant, people from across the state started making trips to Cañon City just to eat at Le Petit Chablis. Many locals have gone to the establishment since its beginning, and several have their “favorite tables.”

La Petit Chablis also has been the go-to place for visiting elected officials and doctors’ monthly meetings through the years.

“A lot of doctors say that’s the reason they chose to live here after they visit the hospital is because of our restaurant,” Michelle Petit said.

But you don’t have to take their word for it.

Le Petit Chablis has been given 4.5 out of 5 stars compiled by 350 reviews on Tripadvisor and is ranked No. 1 of 47 restaurants in Cañon City.

This is what some of the patrons had to say in their reviews: “Lovely dining room/excellent food”; “Best dinner I’ve had in a long time!”; “One of the best restaurants in our memory”; and “Always wonderful.”

One customer wrote, “Being in our 70s, we’ve been to a few restaurants. Some very up-scale (and not upscale!) places in California and New York that were wonderful experiences. Who would have thought that we’d move to Cañon City and have this treasure not 10 minutes away from us! The fare was delicious, house wine by the glass was excellent. Service was friendly and no snooty hosts or servers.”

They also have a 4.5-star review on Yelp.

Patrons from across the country wrote, “An effortless Five Stars, we will be back, soon!”; “Splendid meal with all the ambiance of a luncheon in Paris”; and “Unexpected treasure in Cañon City.”

But perhaps one of the most noteworthy compliments to the Petits was when Robert Redford ate in their restaurant when he was in town filming “Our Souls at Night” in 2016.

“He came with his wife the next day because he liked it so much,” Daniel Petit said.

Through the years, the Petits opened a French bakery inside the building to the east of the restaurant, which operated for 10 years. They also lived in the house on the west side of the restaurant, but they have sold that and now they live on 40 acres in Red Canyon.

Now with the restaurant closed, interacting with customers is what they will miss.

“We’ve made family out of a lot of them,” Michelle Petit said.

He also will miss cooking. After all, he spent half of his life operating the restaurant.

He was only 32 when he opened the restaurant in 1989. Now, at age 65, he is ready to hang up his apron and spend time with his family, including the couple’s four grandchildren, and possibly do some light cooking on the side.

The couple has had the restaurant for sale for three years, but no one has come forward to operate a French restaurant. Instead, new buyers will close on the purchase of the building on Tuesday and turn it into a fine dining German establishment, similar to what the Petits have offered there for 33 years. It is slated to open by the end of the year.

“We wish them the best,” Michelle Petit said. “I hope they do good.”

Chef Daniel thanks the community for their support through the years.

“We thank all of the customers for their support over the last 33 years,” he said. “We hope they find a good restaurant after this.”