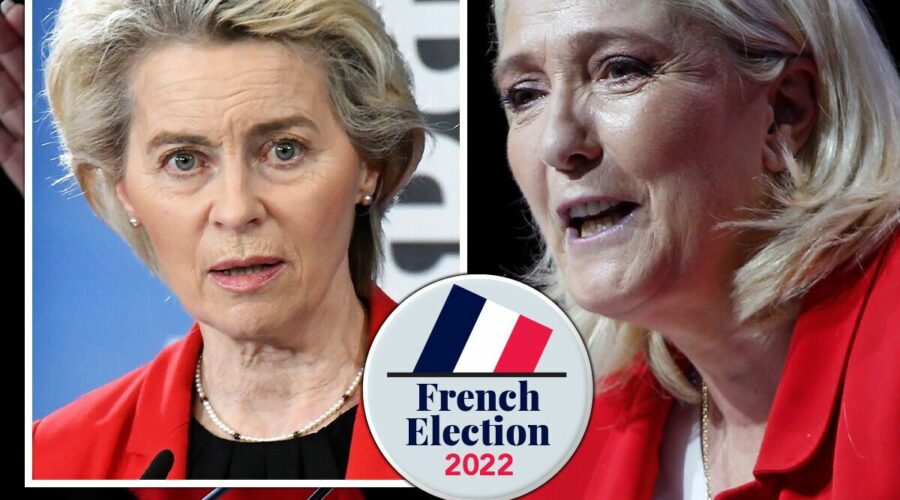 Last night, incumbent President Emmanuel Macron and Ms Le Pen went head to head in a crucial televised debate, ahead of Sunday’s second round run-off vote. Some 15.6 million viewers watched at home as the two presidential candidates clashed on the cost of living crisis, Russia, climate change, and immigration. Far-right candidate Ms Le Pen had fallen behind centrist Mr Macron in a consensus of opinion polls, and needed a strong performance in the debate to convince the millions of undecided French voters.

Despite an improved performance on her disastrous 2017 showing, 50 percent of viewers found Ms Le Pen’s policies “worrying”, while only 29 percent of those polled deemed her presidential.

During the 165 minute wrangle, the European Union was a point of contention, as Ms Le Pen stressed that France was failing to defend its interests inside the bloc.

Though Ms Le Pen has changed her policy from leaving the EU to seeking change within it she vowed to stop negotiating trade deals that “hurt French producers and farmers”.

Mr Macron argued that Ms Le Pen’s idea of a “Europe of nations” would spell the end of the EU and that the national rally leader was “selling a lie”.

Prof Murray, who is a politics professor at Queen Mary University of London, also believed that Ms Le Pen’s EU policy was designed to undermine the EU.

The academic noted that, while Ms Le Pen had dropped her 2017 desire to take France out of the bloc, she appears to want a “Frexit by any other means”.

Prof Murray told Express.co.uk: “She used to be very [against] the EU.

“At the last election Frexit was a phrase that came up a lot, and once upon a time she also wanted to withdraw from the euro.

“She has genuinely toned that down, not just in her discourse, but that’s not in her manifesto anymore.

“So I think she realised that maybe people were a little bit more attached to the EU and the euro than she’d first given them credit for.

“But at the same time she wants to completely undermine European institutions, so it’s going to be Frexit by any other means.

“She thinks that French law should have primacy over European law and that’s not how it works in the European Union.

“Also she’s going to reject their jurisdiction ‒ she doesn’t want to accept the authority of the European Court of Human Rights.

“She doesn’t want to accept European borders and controls, especially on things like immigration. She wants France to be able to control its own borders.

“So while she’s not using words like Frexit anymore it’s basically what she’s trying to do, and the positions that she’s advocating are not tenable with ongoing membership of the European Union.

“So there’s a real threat there”.

Mr Macron’s strict Covid policies alienated many voters while he has been labelled by many of his political opponents as the “President of the rich”.

Nevertheless, the incumbent is popular in the big cities and has secured the support of much of the centre-ground for his pro-EU liberal and global outlook.

Meanwhile, Ms Le Pen has toned down her nationalist, anti EU-rhetoric during the campaign in a bid to “detoxify” her and her party’s image.

However, the gap in the opinion polls has widened slightly since the first round in which the incumbent President won 27.85 percent and Ms Le Pen came second with 23.15 percent.

According to a poll conducted by Harris and Challenges, which surveyed 2,363 voters between April 15 to 18, Mr Macron is projected to win 54 percent of the vote on Sunday, with Le Pen claiming 46 percent.

If Mr Macron were to win he would become the first sitting President to reclaim the keys to the Elysée Palace in 20 years.

21/04/2022 World News Comments Off on Le Pen to ‘undermine EU institutions’ if she wins election: ‘Frexit by any other means’
Markets