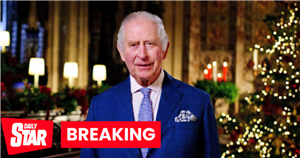 The monarch said Christmas was a "particularly poignant time" for people who have lost family members as he addressed the nation from the Chapel of St George at Windsor Castle, a stone's throw from the site of Queen Elizabeth II's grave at the King George VI Memorial Chapel.

"I am standing here in this exquisite Chapel of St George at Windsor Castle, so close to where my beloved mother, the late Queen, is laid to rest with my dear father," Charles said.

"I am reminded of the deeply touching letters, cards and messages which so many of you have sent my wife and myself and I cannot thank you enough for the love and sympathy you have shown our whole family.

"Christmas is a particularly poignant time for all of us who have lost loved ones.

"We feel their absence at every familiar turn of the season and remember them in each cherished tradition."

This is the first speech Charles has given since coming to power in September, after Queen Elizabeth II died at the age of 96.

She had been the longest-reigning monarch Britain has seen to date, spending 70 years on the throne before her death.

Charles III also acknowledged those who were suffering this year as a result of war or the cost of living crisis. "At this time of great anxiety and hardship, be it for those around the world facing conflict, famine or natural disaster, or for those at home finding ways to pay their bills and keep their families fed and warm, we see it in the humanity of people throughout our nations and the Commonwealth who so readily respond to the plight of others," the monarch added.

“I particularly want to pay tribute to all those wonderfully kind people who so generously give food or donations, or that most precious commodity of all, their time, to support those around them in greatest need, together with the many charitable organizations which do such extraordinary work in the most difficult circumstances. “Our churches, synagogues, mosques, temples and gurdwaras, have once again united in feeding the hungry, providing love and support throughout the year.

“Such heartfelt solidarity is the most inspiring expression of loving our neighbour as our self."

Footage was then shown of British troops and emergency service workers hard at work as the monarch paid tribute to key workers across the country.

But royal fans were quick to spot that, though the tear-jerking speech mentioned Prince William and Kate Middleton, the King's younger son wasn't mentioned. King Charles recalled a recent visit the Prince and Princess of Wales made to their namesake nation, where they "shone a light on practical examples of community spirit" in Swansea and Anglesey.

But the monarch didn't speak of Prince Harry and his wife, Meghan Markle, who released their bombshell Netflix documentary earlier this month.

Buckingham Palace refused to comment on the sensational six-part series, simply titled Harry & Meghan, when it was released in two parts on December 8 and December 15. The documentary saw the couple make claims that William had shouted at his little brother and "terrified" him, and that Meghan had been forced to Google many aspects of royal life when she wasn't taught them by Palace staff.

And news broke earlier this week that the pair would be releasing another show, named Live to Lead, in the new year following the success of their first show.