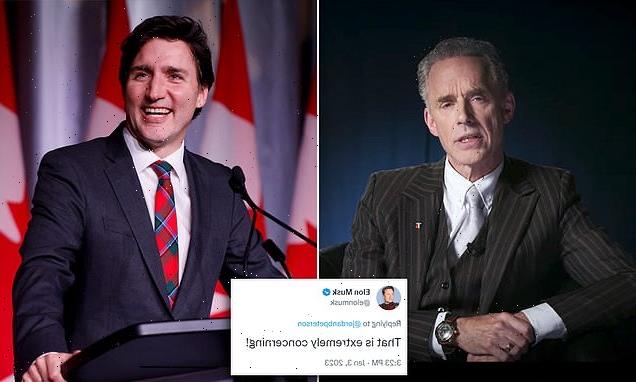 Jordan Peterson claims he is being forced into ‘re-education’ and social media retraining for criticizing PM Justin Trudeau – sparking Elon Musk to respond that ‘silencing’ is ‘extremely concerning!’

Dr. Jordan Peterson is being required to complete social media retraining as part of an investigation into the controversial Canadian psychologist, allegedly over criticism of Canadian Prime Minister Justin Trudeau.

Peterson wrote in a tweet on Tuesday that the College of Psychologists of Ontario is ordering him to complete the program with their experts for retweeting Pierre Poilievre, who is an opposition candidate for prime minister, and also criticizing Trudeau over the years.

While COVID-19 restrictions were in place between Canada and the United States, an unhappy Peterson slammed Trudeau on Twitter for he what he deemed an ‘unconstitutional and vindictive travel ban’ that he blames for his father missing a family wedding in California.

Elon Musk responded to Peterson’s initial tweet announcing the retraining with two exclamation marks in apparent support of his outrage. The psychologist then responded to Musk, prompting the Twitter CEO to call Peterson’s treatment ‘extremely concerning!’ 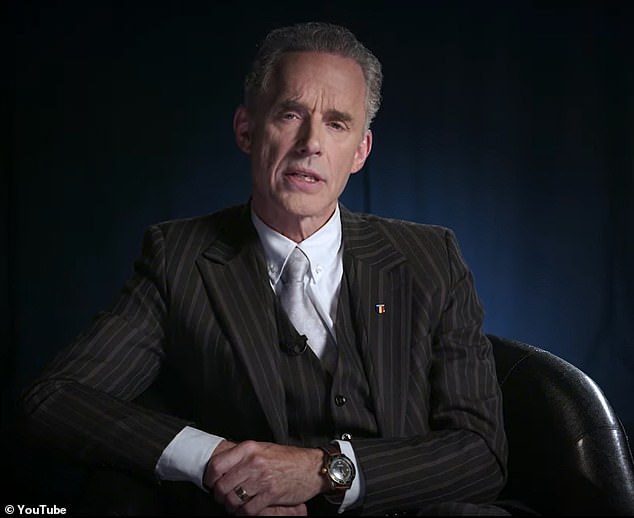 Dr. Jordan Peterson is being required to complete social media retraining as part of an investigation allegedly over his criticism of Canadian Prime Minister Justin Trudeau 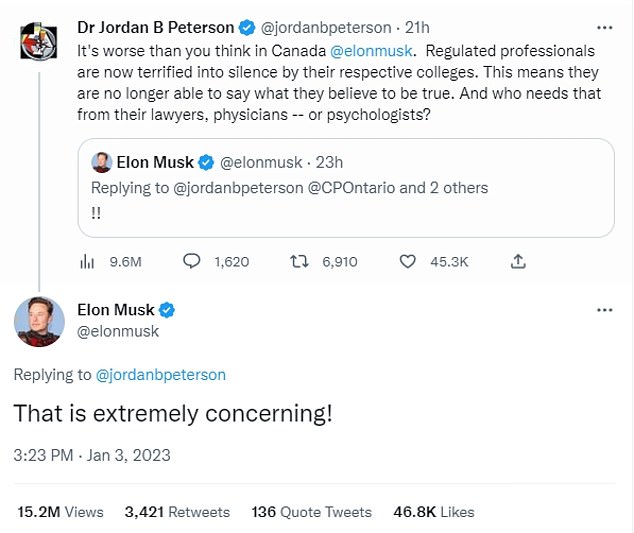 The association confirmed the investigation on its website , saying that it had released a decision on November 22 requiring Peterson to complete a Specified Continuing Education or Remedial Program (SCERP). The program is designed to address issues regarding professionalism in public statements.

Twitter suspended Peterson in June 2022 for referring to transgender Hollywood actor Elliot Page by female pronouns and saying he was ‘converting’ children by posing for Esquire. The platform reinstated him in November following Elon Musk’s acquisition.

In a Twitter thread posted on Tuesday, Peterson claimed that about a dozen people ‘from all over the world’ submitted complaints about his public statements on Twitter and various shows.

He also wrote that the people alleged he ‘harmed’ them with his views, although none had ever been his clients.

‘I have been accused of harming people (although none of the complainants involved in the current action were clients of mone, past or present, or en were even acquainted with any of my clients,’ Peterson wrote on Twitter.

‘About a dozen people from all over the world submitted complaints about my public statements on Twitter and Rogan over a four year period (out of the 15 million who follow me on social media) claiming that I had ‘harmed’ people (not them) with my views.’

He continued: ‘We are now in a situation in Canada under Justin Trudeau where practicing professionals can have their livelihoods and public reputations threatened in a very serious manner for agreeing with the Official Opposition and criticizing major government figures.’ 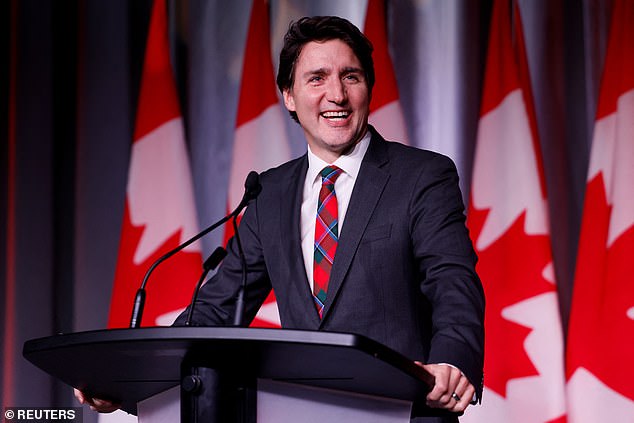 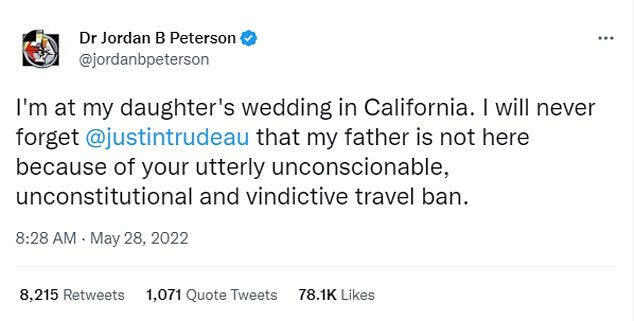 Peterson wrote on Twitter in May 2022 slamming Trudeau and the travel ban.

‘I’m at my daughter’s wedding in California. I will never forget [sic] @justintrudeau that my father is not here because of your utterly unconscionable, unconstitutional and vindictive travel ban.’

At the time, there were restrictions in place on Canada’s part for entry, but for those traveling out of the country – including Peterson’s father – are to go by the rules of their destination. The family wedding Peterson was referring to was held in California, which would be U.S. Customs and Border Protection.

The free-speech advocate posted the tweet to Trudeau days after he announced he had planned to quit Twitter, complaining about the ‘endless flood’ of insults he receives on the platform.

He had threatened to Twitter after being criticized for his tweet calling plus-size model Yumi Nu’s Sports Illustrated cover ‘not beautiful’ and that ‘no amount of authoritarian tolerance is going to change that.’ 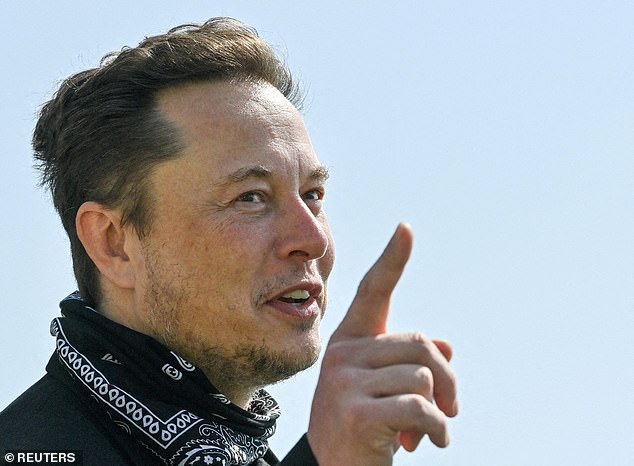 Twitter suspended Peterson in June, but he was reinstated after Elon Musk’s acquisition. Musk responded to Peterson’s post about the retraining with double exclamation marks 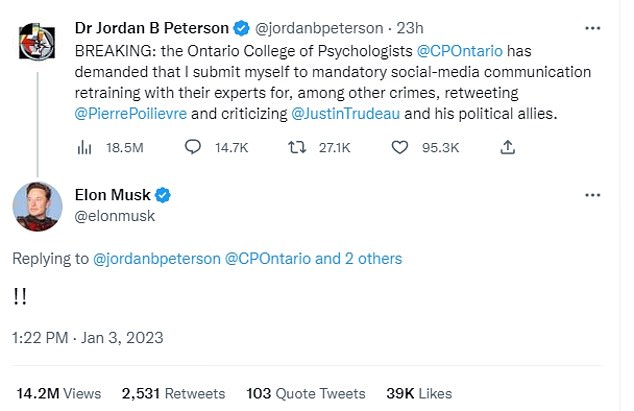 Peterson went on to say: ‘If I comply the terms of my re-education and my punishment will be announced publicly. I have already had the second most serious category of punishment levied against me and have been deemed at high risk to ‘re-offend.’

‘Canadians: your physicians, lawyers, psychologists and other professionals are now so intimidated by their commissar overlords that they fear to tell you the truth,’ he continued. ‘This means that your care and legal counsel has been rendered dangerously unreliable.’

Peterson has filed a Notice of Application for Judicial Review with the Ontario Divisional Court.

Peterson, an outspoken critic of normalizing transgender pronouns and identities, was suspended from Twitter after saying Page had his breasts removed by a ‘criminal physician,’ reiterated his statement after he appeared in Esquire.

‘See, I would’ve left Ellen Page alone if she hadn’t been parading her new abs in a fashion magazine,’ Peterson told podcaster Kyle Kulinski on his Krystal Kyle & Friends show. ‘How many kids do you think she convinced to convert, one? A Thousand?’

The controversial psychologist also scoffed at his Twitter suspension and continued to refer to Page as female and using his former name, Ellen.

That is a practice referred to by transgender people as ‘dead-naming,’ which many consider offensive. 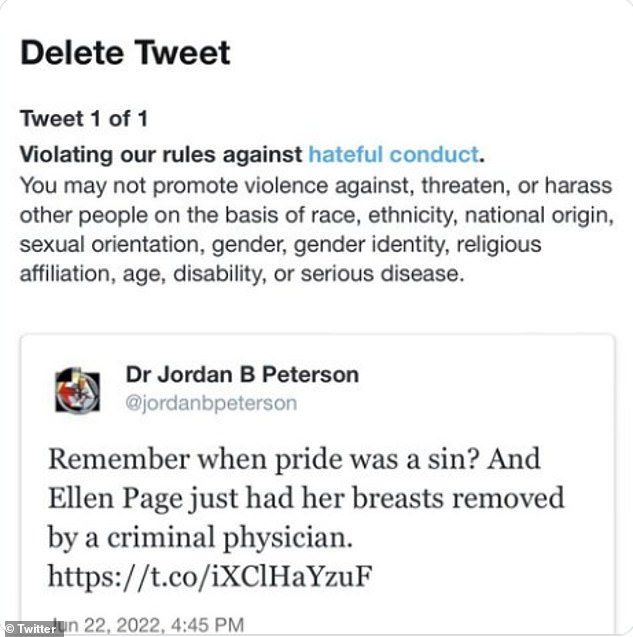 Peterson had been suspended from Twitter after writing that Page had his ‘breast removed by a criminal physician, which the social media company flagged as hateful conduct 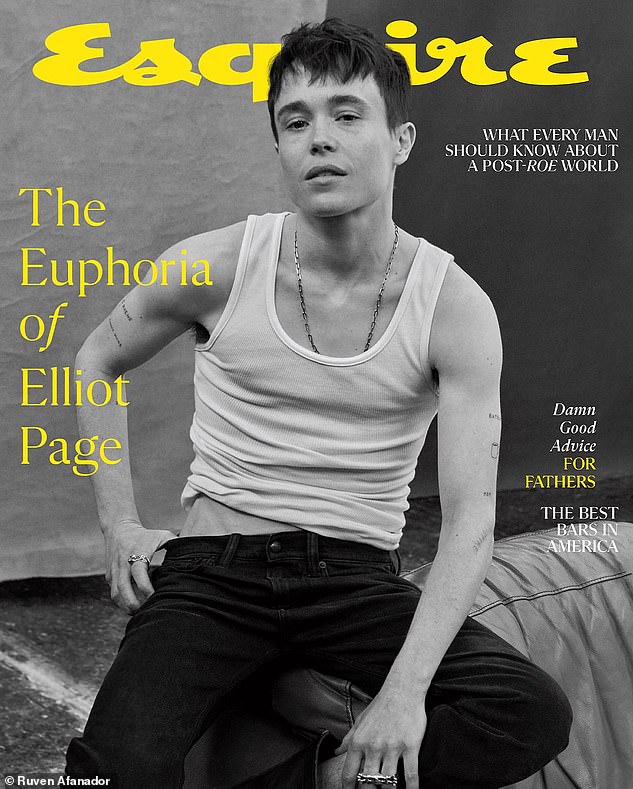 Peterson reiterated claims that by celebrating Page and his transition from female to male, others would be confused and converted. Pictured: Page on Esquire’s summer magazine

Kulinski, who said he leans towards the left of the political spectrum, appeared to take issue with Peterson’s claims about Page’s alleged influence on minors.

‘I think that with the trans community, it’s very similar to the gay community where back, when that first became a big issue, people thought, ‘Oh, if we talk about it, if it’s in magazines or whatever, we’re promoting kids to go down that path,’ Kulinski said.

‘But really what happened is people are who they are. They’re gay. So I don’t think you’re promoting people to do that,’

‘No, that’s not what happened,’ he said. ‘You’re completely wrong.

‘You’re utterly wrong,’ he then yelled. ‘There’s nothing about that that’s right.’

Regarding his Twitter suspension, Peterson had said it was barely a punishment. 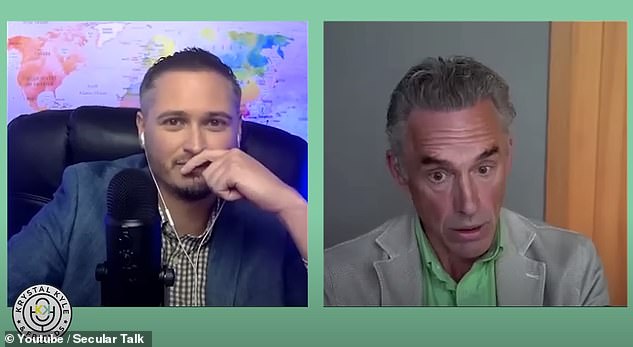 Peterson (right) also got visibly angry and yelled at Kyle Kulinski, host of the Krystal Kyle & Friends show, after the podcaster disagreed with his claims last year

‘Well, I don’t know if it got me in trouble, you know, I don’t think I’m in trouble, Twitter banned me, but I don’t consider that trouble,’ Peterson said defiantly.

This isn’t the first time Jordan has come under fire for controversial tweets.

Peterson briefly quit Twitter in May after saying a plus-size Sports Illustrated Swimsuit model was ‘not beautiful.’

The cover of the magazine showed Yumi Nu, a 25-year-old model, and the first Asian plus-size model to be featured in Sports Illustrated.

‘Sorry. Not beautiful. And no amount of authoritarian tolerance is going to change that,’ Peterson wrote.

After receiving backlash, Peterson claimed he deleted Twitter from his devices while his account remained active. It was the second time he had left the platform.

Prior to leaving the platform in May, Peterson had accumulated a list of controversies dating back to 2016.

The latest in a long line of controversies: Inside Dr. Jordan Peterson’s past scandals

2016: Slammed proposed Canadian legislation that would ban discrimination based on ‘gender identity or gender expression’, claiming it would threaten free speech

2017: Claimed that ‘the idea of white privilege is absolutely reprehensible’ because ‘most people have all sorts of privilege’

2018: Told British TV network Channel 4 that men need to ‘grow the hell up’ and ‘adopt responsibility’ while discussing the crisis of masculinity. Also claimed that the gender pay gap was not ‘only due to sex’

2020: Peterson’s daughter Mikhaila revealed that he had been hospitalized in Russia after developing a severe dependence on anti-anxiety medication benzodiazepines. She claimed that he ‘nearly died several times… from what the medical system did to him in the West’

Late 2020: Staff at Penguin Random House Canada attempt to block the publication of his self-help book Beyond Order: 12 More Rules for Life, slamming Peterson as an ‘icon of white supremacy and hate speech’

2021: Tells The Sunday Times that he had become suicidal as a result of his benzodiazepine dependence and shared that he had to be put in an induced coma while hospitalized in Russia

May 2022: Calls plus-size Sports Illustrated Swimsuit cover model ‘not beautiful,’ and further claiming ‘no amount of authoritarian tolerance is going to change that.’