Washington: In his first television interview since the November 3 election, President Donald Trump suggested Sunday that he will never accept his loss to Democrat Joe Biden and continued to fling baseless accusations of election fraud.

"There was tremendous cheating here." 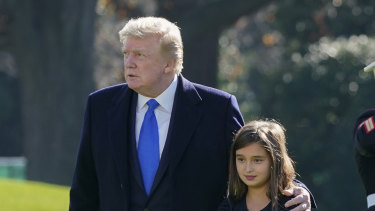 US President Donald Trump walks with his granddaughter Arabella Kushner on the South Lawn of the White House in Washington.Credit:AP

Biden won the presidential race with 306 electoral votes – the same number as Trump had four years ago in what he and his aides described as a landslide at the time.

Biden's victory was further solidified Sunday as the Wisconsin recount confirmed that he had bested Trump in the key swing state by more than 20,000 votes. The president and his legal team also have failed in court challenge after court challenge as they have sought to overturn the results in various states.

In the Sunday interview, Trump said he is "going to use 125 per cent of my energy" to continue to contest the results through the courts and signalled that he would be open to having a special counsel investigate the election. Any such appointment would be made by Attorney General William Barr. 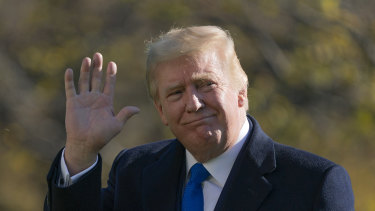 US President Donald Trump walks on the South Lawn of the White House.Credit:AP

Trump also voiced disbelief that Biden won more than 80 million votes, by far the most received by a presidential nominee. Barack Obama won in 2008 with nearly 70 million votes, a record that he didn't beat in 2012, when he garnered just under 66 million votes.

"Joe Biden did not get 80 million votes," Trump declared on Sunday, providing no evidence for his assertion. He claimed that some foreign leaders have been calling and telling him that this was the most "messed-up" election they have ever seen, although he did not name any of the leaders.

The White House has not released the details of any such calls, and most US allies have congratulated Biden on his win. Bartiromo did not dispute any of Trump's false claims.

Ahead of the January 5 Senate runoff elections in Georgia – which will determine which party controls the chamber – Trump also renewed his criticism of Republican officials in the state, including Governor Brian Kemp and Secretary of State Brad Raffensperger, for not supporting his baseless fraud claims.

"The governor's done nothing. He has done absolutely nothing. I'm ashamed that I endorsed him," Trump said of Kemp. Republicans are aiming to turn out GOP voters to lift Republican Senators Kelly Loeffler and David Perdue to victory in a state that Biden won this month, but those efforts could be made harder by the president's persistent claims that voters should not trust that their votes will be counted.

Understand the election result and its aftermath with expert analysis from US correspondent Matthew Knott. Sign up to The Sydney Morning Herald‘s newsletter here, The Age‘s here, Brisbane Times‘ here and WAtoday‘s here.

29/11/2020 World News Comments Off on ‘Joe Biden did not get 80 million votes’, Trump claims in first post-election interview
World News