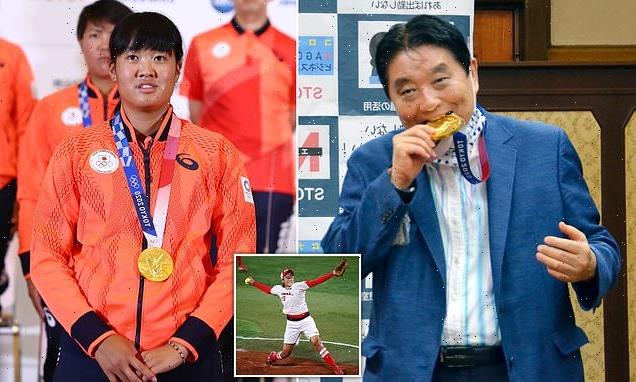 A Japanese softball player will be given a new Olympic gold medal after the mayor of her hometown bit down on her original, following an outcry on social media.

Miu Goto was attending an event to celebrate her team’s achievement in beating the United States in the softball final when Takashi Kawamura, mayor of central Japan’s city of Nagoya, pulled down his mask and put her gold medal between his teeth.

Mayor Kawamura had been praising the pitcher during the visit on August 4, but his eyes were glued to her medal and he asked her to put it around his neck before biting it.

The mayor on Thursday apologised for the controversial move after receiving a wave of criticism for disregarding coronavirus etiquette and showing a lack of respect to the athlete.

And now, the Tokyo 2020 organisers have been forced to give Goto a new untarnished medal after the controversy. 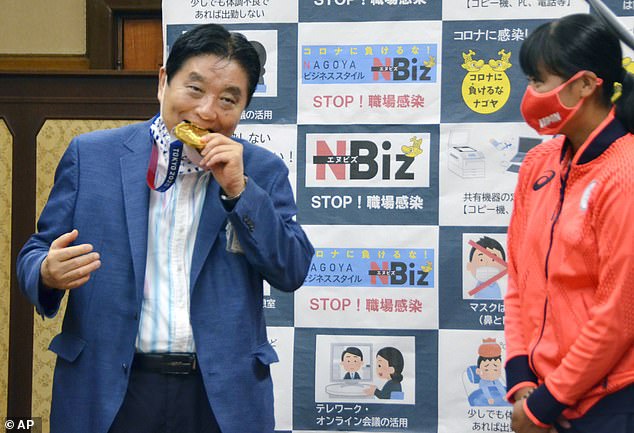 Miu Goto (right) was attending an event to celebrate her team’s achievement in beating the United States in the final when Takashi Kawamura (left), mayor of central Japan’s city of Nagoya, pulled down his mask and put her gold medal between his teeth 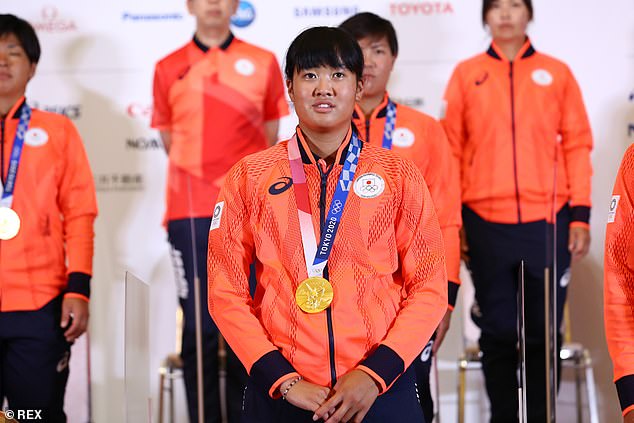 ‘With support from the International Olympic Committee and in line with her own intention, Ms Goto’s medal is now set to be exchanged for a new one,’ Tokyo 2020 organizers said, adding that the IOC will bear the cost of the exchange.

When he had asked Goto to place her medal around his neck, he was heard saying: ‘Are you prohibited from having romantic relationships?’.

The mayor told the Japanese newspaper The Mainichi: ‘I deeply regret making her uncomfortable with remarks that went too far.

‘When I ask a young person if they have a boyfriend or girlfriend, it allows them to relax and speak more. As a mayor it’s important to put people one is talking to at ease.’ 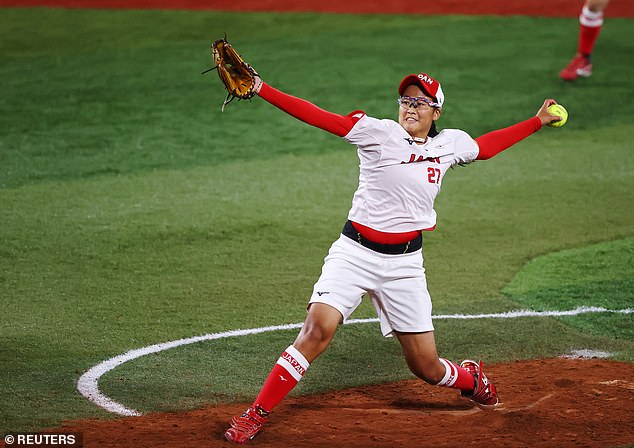 Mayor Kawamura also apologised on Thursday for biting down on the athlete’s medal and said: ‘I’m really sorry that I hurt the treasure of the gold medalist.’

The medal bite has become a staple of Olympic photo-ops – but for the winners themselves, not others.

The scene broadcast on television prompted thousands of complaints to city hall. Some Olympians said they treat their medals as treasures and that it was outrageous for Kawamura to bite one.

There was even a rare rebuke from Toyota Motor Corp, which owns the Red Terriers softball team that Goto plays for.

‘I would cry if that happened to me,’ Naohisa Takato, who won gold for Japan in judo, said in a tweet. ‘I handle my own gold medal so gently not to scratch it.’

Yuki Ota, a silver-medal winning fencer, said the mayor’s action was disrespectful to athletes and was a bad idea for COVID-19 measures.

Goto reportedly considered keeping the original but eventually accepted the IOC offer of a replacement.