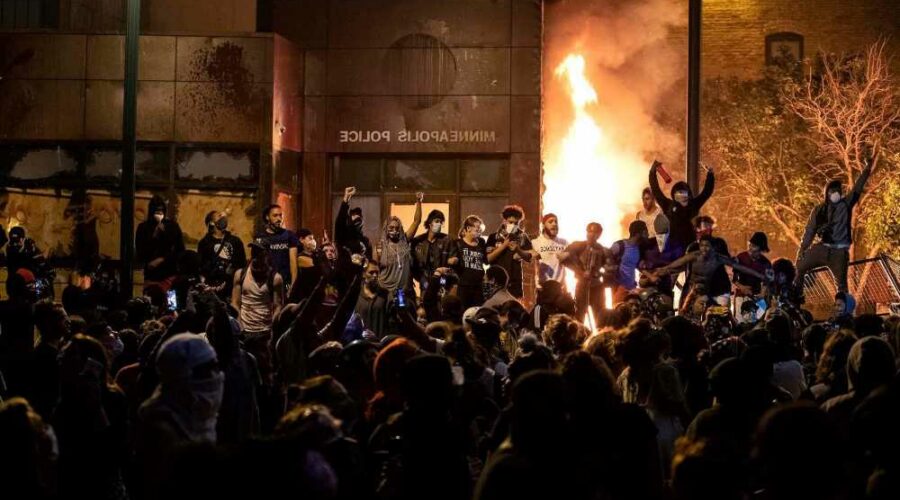 Cy Vance is targeting Trump but praised him in a 2016 letter: Devine

Bill de Blasio's NYC is a dark blast from the past: Devine

It was one year ago on Friday that Minneapolis’ soy-boy mayor, Jacob Frey, issued the order to police to evacuate the Third Precinct and leave the station to be overrun by the mob and burned to the ground.

Protests had quickly turned violent after George Floyd’s death under the knee of police officer Derek Chauvin three days earlier, and the police surrender only empowered the domestic terrorists who were whipping up the crowd.

For the next four nights, criminals ransacked the city and terrorized its residents with little in the way of police intervention.

Frey’s craven capitulation to the forces of violence had lit the match on a summer of rage across the country that really lasted beyond the November 2020 presidential elections, in lawless places on the West Coast like Portland and Seattle. Statues were toppled, the White House was besieged, looters had a field day, and police were assaulted with bricks, Molotov cocktails, bottles of urine and lasers.

More than 30 people were killed, 700 police officers were injured, and insurance damages were estimated at over $2 billion.

The American people, already battered by a pandemic, had to endure six months of relentless terrorism from anarchist militants whose actions were minimized, normalized and, in some cases, applauded by the Democratic Party and Trump-deranged media in an election year.

Until he was against it, candidate Joe Biden was all for “Defunding the Police” — or “absolutely” redirecting funds away from police, as he put it. Kamala Harris promoted a bail fund for rioters.

No one will forget how Democrats played footsies with the thugs for political advantage. They fed the malicious lie that police are “systemically” racist murderers of black people.

“This is our moment to root out systemic racism and ensure justice finally rings out for all in America”, tweeted Biden while our cities were burning.

At the same time, far-left politicians such as Minnesota’s Democratic Attorney General Keith Ellison, tried to divert blame onto Trump voters who he pretended were the external agitators in Minneapolis’ riots. “White supremacists,” he called them.

It was a narrative that would stick.

And, if you remember, on election eve, retailers from Columbus Circle to Soho and elsewhere across the country boarded up their storefronts, in anticipation of extreme violence if Donald Trump won.

Of course, he lost, so there were no riots. What does that tell you?

Through it all, the Democratic Party and its media enablers persisted in characterizing what was happening as “mostly peaceful protests.”

Since the only riot footage was from fearless young video journalists such as Julio Rosas and it barely aired on CNN or MSNBC et al., half the country was only dimly aware of the mayhem, unless it was happening in their back yard.

What may have begun as peaceful protests under the banner of the Marxist-based group Black Lives Matter had been hijacked by black-clad militants affiliated with the hard-left revolutionary movement Antifa.

Wherever there was a local BLM grievance, Antifa exploited the moment and stoked the rage.

Mug shots showed these people overwhelmingly to be white, and many were seemingly drug-affected. A good number were the children of privilege. Of those who were arrested, almost all were released with a slap on the wrist. Talk about white privilege.

Donald Trump railed against Antifa and declared he would have them classified as domestic terrorists. But nothing ever happened. FBI director Christopher Wray famously downplayed the threat, telling lawmakers in September that Antifa is just an ideology, “not a group or an organization.”

In a presidential debate a week later, Biden defended Antifa as “an idea, not an organization” and said white supremacists pose a greater danger.

“When a bat hits you over the head, that’s not an idea,” Trump replied.

Nothing characterizes the peculiar impotence of the Trump presidency better than the summer of unchecked riots which demoralized the nation.

A new book, “The Antifa: Stories from Inside the Black Bloc”, by former naval-intelligence officer Jack Posobiec, sheds light on the battle behind the scenes at the White House to take the militant organization seriously as a domestic terrorist threat.

Posobiec opens with a meeting in the Oval Office between Wray and Trump, a few days before the election, in which the President expresses his frustration at the FBI’s inaction on Antifa. It is the third such meeting in six months.

“’That’s a damn lie, Chris, and you know it,” shot back the president. ‘I see this stuff night after night on Twitter. We’ve got Homeland Security up in Portland getting attacked by gangs of these thugs and you’re going to sit there and tell me it’s not happening?’

Wray balked at the President’s order to crack down on Antifa, records Posobiec, just as the Pentagon balked at Trump’s order for 10,000 troops from the National Guard to be activated to defend Washington DC on Jan. 6, the day of the Capitol riot.

A senior Trump White House official is quoted on the tug of war over Antifa: “It mostly consisted of Wray playing [Antifa] down as a minor inconvenience with no real training . . . or saying the FBI can’t go after a political ideology . . .Wray would say Fox and OAN were exaggerating. He . . . always promised to come down harder after every scrap but obviously never did.”

Of course, since January 6, now Wray has focused the FBI’s efforts almost exclusively on Trump supporters, in one of the largest most complex investigations in the agency’s history.

It is extraordinary that Dr Anthony Fauci, the White House medical adviser throughout the pandemic, never disclosed earlier the part he played in the risky research that may have prompted the coronavirus outbreak in a laboratory in Wuhan, China.

The so-called “gain of function” research to juice up coronaviruses in the lab had been banned by the Obama administration as unsafe pending a review — against the wishes of Fauci, the long-time director of the Nat­ional Institute of Allergy and Infectious Diseases, which partly funded research in Wuhan through a sub-contractor.

In December 2017, the ban was lifted by the neophyte Trump administration, after Fauci told junior White House staffers at a meeting in the office of science and technology that a review had cleared the research as safe, according to a report in The Australian newspaper.

Dr. Fauci did not mention this resumption of research funding to senior administration figures, nor with the president or White House chief-of-staff, claims the article by Sharri Markson, author of an upcoming book, “What Really Happened in Wuhan.”

“It kind of just got rammed through,” she quotes one official as saying.

You’d think Fauci might have mentioned something in the last year.

31/05/2021 World News Comments Off on It’s been a year of Antifa and unchecked anarchy: Devine
Markets