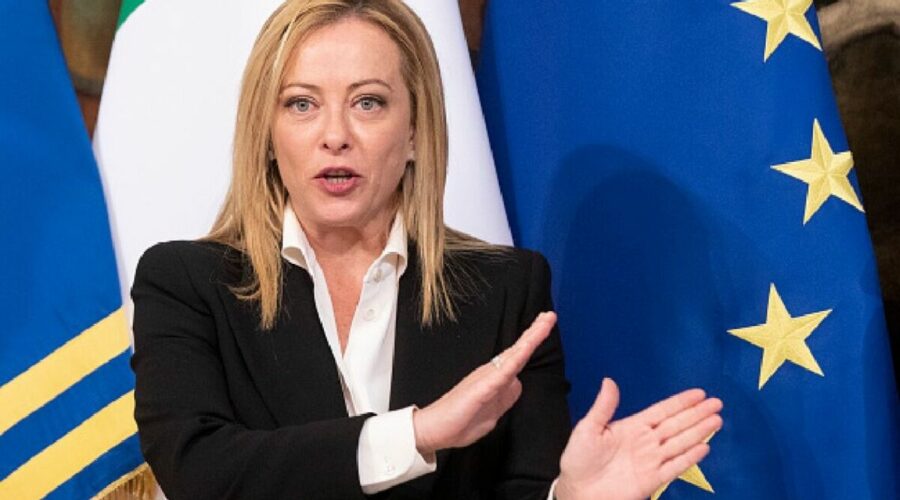 Georgia Meloni says 'we will not take lessons' from France

Giorgia Meloni will meet in Brussels with European Commission President Ursula von der Leyen, European Council President Charles Michel and European Parliament President Roberta Metsola.  Ms Meloni’s Brothers of Italy party has neo-fascist roots and she has governed since October 22 along with anti-migrant League leader Matteo Salvini and former Conservative Premier Silvio Berlusconi. The latter only recently vaunted his connections to his friend Russian President Vladimir Putin, with whom he exchanged vodka and Lambrusco wine on his birthday.

Thursday’s visit to Brussels will be Ms Meloni’s trip abroad since being nominated as Italy’s new leader.

For some, it brings the Trojan Horse of the far right into the walls of the EU, just as the bloc faces crises on many fronts. For others, it’s a case of the EU applying the dictum: keep your friends close but your enemies closer.

In a recent plenary speech addressing far-right surges from Sweden to Spain and from Germany to — indeed — Italy, the president of the Socialists and Democrats group of centre-left European lawmakers, Iraxte García Pérez, warned: “The problem is that far-right populisms undermine institutions, use democracy to weaken freedoms and rights. When they enter the institutions, they use them for their interests.”

“I count on and look forward to constructive cooperation with the new government on the challenges we face together,” Ms von der Leyen said after Meloni’s appointment.

In Germany, Ms Meloni’s decision to travel to Brussels is being seen as an attempt to “use Germany’s weakness in the EU”.

German daily Welt claimed the the Italian leader is also strategically aligning herself with French President Emmanuel Macron, at a time Franco-German relations are particularly suffering.

They wrote: “What is particularly interesting is that Meloni is aligning herself with France’s President Emmanuel Macron on fiscal policy issues. If she is skilful, she could ally with him to push through her interests. For the moment to find alliances against German interests is favourable: relations between France and Germany are currently at a low point.

“Other EU countries are also annoyed by the fact that Berlin always looks after itself first before taking interests in the rest of the EU into account. In addition, the German position is currently weaker than usual. Normally, Germany sees itself as the EU’s paragon, but now it has to admit that it has made mistakes. First and foremost, it is too dependent on Russian gas. Because of this, Germany depends on the goodwill of its EU neighbours to share their gas. Good conditions, then, for weakening German dominance in the EU.”

But even if Ms Meloni has gone out of her way to soften the edges of the Brothers of Italy’s far-right rhetoric, it has been easy to put much in question again.

On the eve of her visit, her government had to defend a decree banning rave parties against criticism it could be used to clamp down on protests while it took no action against a neo-fascist march to the crypt of Italy’s slain dictator Benito Mussolini.

Ms Meloni has been dogged by critics who say she hasn’t unambiguously condemned fascism. Brothers of Italy, which she co-founded in 2012, has its roots in a far-right party founded by nostalgists for Mussolini. She has retorted that she has “never felt sympathy or closeness for any non-democratic regime, including fascism.”

When it comes to the EU, she is expected to criticise the bloc as being overly meddling in national affairs on anything from LGBTQ rights to being too interfering in the economy with one-size-fits-all rules and too lax on migration.

Similar criticism has been heard in Poland and Hungary and there are fears that, especially on the rule of law and democratic standards, the EU is increasingly weakened from within. For years, Hungarian Prime Minister Viktor Orban, a self-confessed proponent of “illiberalism,” has increasingly run an obstructionist course in an EU where many major decisions have to be taken by unanimity.

Ms Meloni spoke to Polish Prime Minister Mateusz Morawiecki late Wednesday and they signaled their willingness to work together to “ensure greater efficiency” in the EU, her office said. It is language easily interpreted as internal opposition.

Ms Meloni has stressed though that she doesn’t want to torpedo the bloc, whose founding treaty was signed in Rome in 1957.