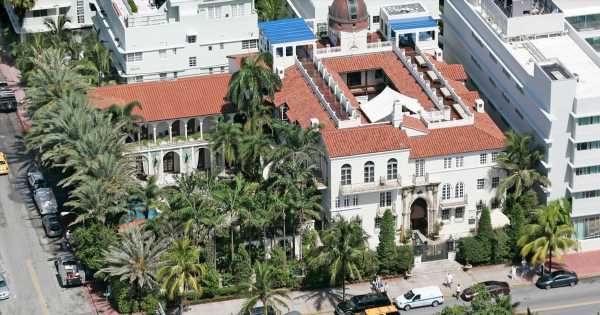 Two men have died in a suspected suicide at Gianni Versace's notorious mansion – a day before today's 24th anniversary of the fashion designer's murder at the lavish property.

A preliminary police investigation ruled the deaths as "an apparent double suicide".

"The ultimate cause of death will be determined by the Miami-Dade Medical Examiner’s Office," police said in a tweet.

These latest deaths come almost 24 years to the day since the late former homeowner was gunned down on the marble steps outside the iconic home on July 15, 1997.

Versace, who was 50 when he died, spent £28million renovating the three-storey building, with its opulent, Mediterranean revivalist architecture, after he bought it in 1992.

Tragically, having returned from a restaurant in Miami's famed Ocean Drive, he was shot twice as he walked towards his front door.

Before he got a chance to enter the iron gates that guarded the property, a dark-haired man wearing knee-length shorts, a grey tank top, a baseball cap, and a backpack came up behind him and shot him from point-blank range.

The killer then reportedly turned around and casually walked away. Versace was pronounced dead at the scene.

While the police launched a national manhunt for the killer, Versace’s siblings, Donatella and Santo, flew in from Milan, Italy.

A week after the murder, his body was returned to his homeland for one of the most high-profile funerals Italy has ever witnessed.

Pop stars Elton John and Sting, meanwhile, closed the service with an emotional rendition of The Lord is My Shepherd.

Back in Miami, police had identified Versace's assassin.

Serial killer Andrew Cunanan, 27, was already a wanted man, having previously killed at least four other people across three US states over a three-month killing spree.

Described by his own mother as a "high-class homosexual prostitute", Cunanan quickly became the prime suspect in the case.

He remained on the run for almost two weeks after the Italian's murder.

But, as police closed in, he shot himself in the head on a houseboat close to Miami Beach. Police later revealed he had used the same gun used to kill three of his victims, including Versace.

Before his death, Cunanan never told anyone why he killed the gay fashion mogul and left no evidence of a motive.

"He wasn’t caught because he was targeting gay people, and people didn’t care," Ryan Murphy, who produced the TV documentary The Assassination of Gianni Versace: American Crime Story, told Entertainment Weekly in 2018.

"The more I had read about it the more I was startled by the fact that [Cunanan] really was only allowed to get away with it because of homophobia."

In the years since, his death, Versace's former home has become a shrine for those who wish to pay homage to the late icon.

Built in 1930, it was transformed into a boutique hotel in 2015 and has become the third most photographed home in the US – behind the White House and Graceland.