A year ago, 32-year-old Gary Dickson was living and working cheek-by-jowl with two housemates in Carlton during the extended coronavirus lockdowns in Melbourne.

With all three housemates home around the clock due to work-from-home orders, Mr Dickson spent much of the year working and sleeping in the same room and fighting for space in the shared kitchen.

But now, Mr Dickson is one of many renters who have upgraded to new digs on the back of the cheapest inner-city rents in more than a decade. 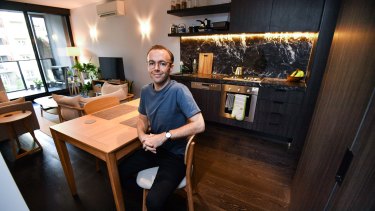 Gary Dickson was able to snag a North Melbourne two-bedder in a new building for $350 a week.Credit:Joe Armao

Mr Dickson was paying about $245 a week for a room in his share house, and was expecting it would cost about $420 a week to secure an apartment and more space for himself.

“[But] I started looking around September last year and I was finding at the beginning of October a lot of one-bedroom apartments that were suddenly in my price range [for about $350],” the university lecturer said.

“Then at the beginning of November, I ended up finding a two-bedroom apartment [in North Melbourne] that was priced the same as the one-bedrooms I was seeing in October in the same apartment complex.”

Mr Dickson said the ability to afford a place with a second room had been “a lifesaver” — his office has permanently closed with all staff opting to work from home ongoing after the lockdowns of 2020.

It’s one silver lining for people outside the surging housing market: for those able or willing to live in the inner city, apartment rental asking prices have fallen to 2010 prices, according to Dr Nicola Powell, senior research analyst at Domain.

“The CBD very much remains a tenant’s market, and I think the tenants have the power to negotiate and they may be able to afford a better location and larger property.” 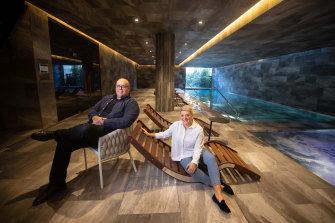 Leigh Boughton and Genevieve Carthy have upgraded to a new apartment with a shared pool.Credit:Simon Schluter

Engaged couple Leigh Boughton, 37, and Genevieve Carthy, 34, were renting a one-bedroom period cottage in Middle Park for $700 a week until the pandemic hit. In July last year, they moved into a brand new two-bedroom apartment on St Kilda Road with two balconies, two car spaces and an on-site gym and pool for $550.

The pair, who own an investment property, were the first tenants to live permanenty in the St Kilda Road apartment because it had been used only for Airbnb guests. While it was originally listed for rent at $760 a week, Mr Boughton was able to snap it up for just $550.

“That’s the only reason why I moved. I’m like, ‘I’d be crazy not to move with everything that’s here’,” he said.

Domain’s Dr Powell said although the rental market was starting to slightly tighten – vacancy rates in the CBD dropped from 11.3 per cent in March to 10.2 per cent in April – rents in and around the CBD were likely to remain affordable until international students and travellers were allowed to return.

Beyond the CBD, renters had the most properties to choose from in Stonnington East, Whitehorse West, Stonnington West, Boroondara, Glen Eira and Monash, she said.

But it’s a very different story on the city fringes – with less than 1 per cent vacancy rates in the Mornington Peninsula, Yarra Ranges, Cardinia, Nillumbik, Macedon Ranges and Maroondah.

In the city’s south-east, very few properties are available for rent, with less than 1 per cent vacancy rates in Casey North, Casey South, Frankston and Sunbury.

As house prices increase again, Dr Powell said there was an opportunity for would-be first-home owners to save for a deposit quicker if they were willing to move to the inner city.

“We’ve got escalating prices and if they ultimately dream to be a home owner and if they’re able to adjust their lifestyle, their pathway to saving will be better,” she said.

Mr Boughton and Ms Carthy are planning to start a family, and are now considering riding the rental wave again to find an affordable house, potentially in Camberwell, when their lease expires in July.

“There’s homes that are now similar prices, or for $100 more you get a three-bedroom house,” Mr Boughton said.

While Mr Dickson is a long way off a deposit to buy his own home, he was thrilled to have two rooms in the three-year old building at a cheaper price than a run-down one-bedroom split level flat that he lived in in Flinders Lane in 2014.

Our Morning Edition newsletter is a curated guide to the most important and interesting stories, analysis and insights. Get it delivered to your inbox.

17/05/2021 World News Comments Off on ‘I’d be crazy not to move’: Melbourne tenants upgrade as apartment rents fall to 2010 prices
Markets