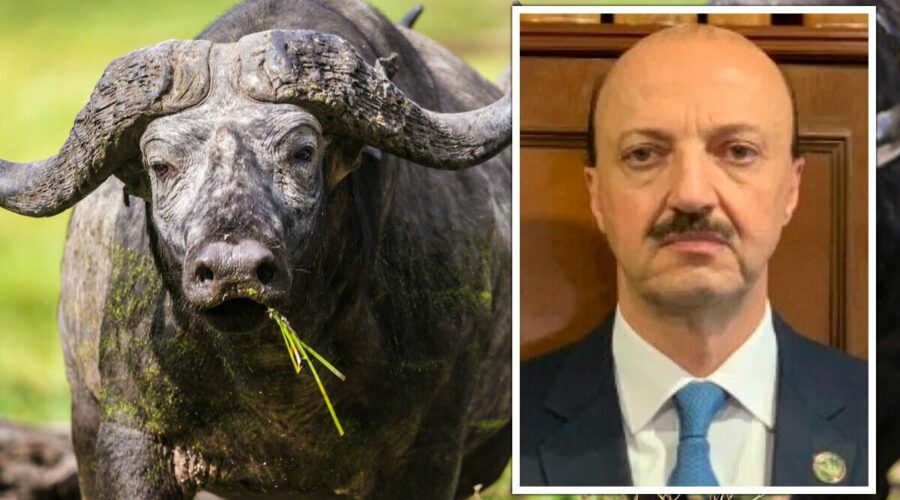 Springtime on the Farm: Farmer shows off his buffalo

The president of the Mexican Hunting Federation died in Argentina after he shot a buffalo and “enraged” it, causing it to repeatedly ram him. Mario Alberto Canales Najjar, 64, was hunting in the province of Entre Rios, in the northeast of the country on Friday, October 7, police have confirmed. At first, the 1,100-kilo animal was knocked to the ground by the shot from the Mexican hunting boss’s 458-calibre rifle. However, after a few seconds the buffalo got to its feet and charged Mr Canales Najjar and his Argentinean guide, who was accompanying him.

Cristian Graciani, head of the rural crime prevention brigade in Gualeguaychú, a town near the scene of the incident, said: “He was at a very short distance, about 30 metres away, when he fired the shot, waiting for the buffalo to fall to the ground, but it did not. The animal became enraged, and managed to ram him and once he was on the ground, Canales was hit several times by the animal, which caused him serious injuries.”

Speaking to channel Todo Noticias, Mr Graciani said that the details of the event were told to them by the guide, who was the only other person present at the scene. Experts state that a buffalo can be killed by a single shot of the kind of rifle Mr Canales Najjar was using – but it can take three to four minutes of agony before it dies.

During this time, the buffalo may run away or, as in this instance, assault the one who shot it. Sensing what was about to happen, the guide said he tried to warn the Mexican hunter, but due to the earmuffs they were wearing to prevent damage to their ears, his cries of alarm were not heard.

The guide said that after striking him to the ground, the buffalo beat Mr Canales Najjar with its head on his chest and body. Desperate to help, the guide took his companion’s rifle and fired four shots in a row at the buffalo, which fell to its side.

Even this was not enough, however, as five seconds later the buffalo rose again, lunging for the guide – but he fired a sixth and final shot, finally killing it. Mr Canales Najjar remained conscious for the next half an hour. There was no mobile signal in the part of Punta Caballo where they were hunting.

The guide carried the hunter a reported 3km to reach a pick-up truck to call for help.

After a chain of calls from fellow hunters, the Brigade of the Rural Crimes Department of Gualeguaychú was finally reached.

Mr Graciani told Infobae: “We arrived on the scene within two hours of the incident. The hunter was already dead and the animal’s body was about 3 km away”.

An autopsy report would later reveal that Mr Canales Najjar had suffered multiple fractures to the sternum, multiple rib fractures, and retroperitoneal haematomas, and that he ultimately died as a result of hypovolemic and/or neurogenic shock. According to witnesses at the town, Mr Canales Najjar’s two travelling companions said he had “died doing what he loved”.

The three had arrived in the Punta Caballo estate two days prior with hunting permits.

According to Mr Graciani, buffalo hunting is in a curious legal loophole, where it is not considered a wild animal, and also not managed as livestock. It therefore does not belong under either small game or big game hunting laws.

The crime prevention chief added that Mr Canales Najjar’s death was unprecedented, saying: “We had never had a case of a hunter being attacked and killed by his prey. We had recorded cases of hunters who were killed by incorrectly loaded weapons or by their own or other people’s unintentional shooting”.

The Mexican Hunting Federation issued a statement of condolences, noting that he was “a great man and a much better friend” and a “conservationist and tireless fighter for the rights of hunters”.