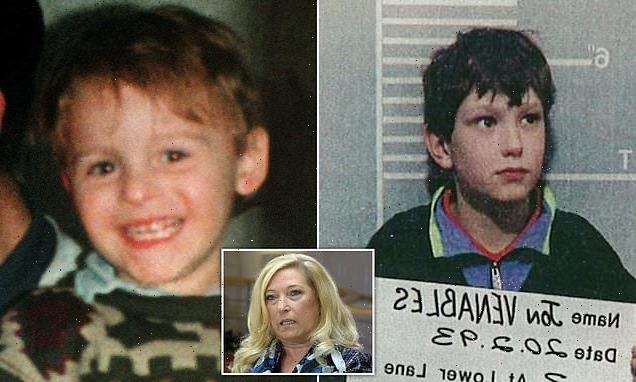 Arrested for drunken brawl, cautioned for cocaine possession and jailed TWICE for child abuse images: How James Bulger’s killer Jon Venables has re-offended since his release in 2001 – as toddler’s mother pleads with PM to keep him locked up

Jon Venables has reoffended four times since his release from prison for the sickening murder of James Bulger in 1993 – as the toddler’s mother calls for Liz Truss to halt his bid for freedom ahead of a parole hearing.

Venables, now 40, and Robert Thompson were both 10 when they kidnapped, tortured and killed two-year-old James before leaving his body by a railway line in Liverpool 25 years ago.

They were released on licence under strict conditions after serving eight years in secure children’s units and were given lifetime anonymity in 2001.

Despite then being judged by a parole board ruled he was no longer a threat to public safety, Venables has since returned to prison twice after being found in possession of child abuse images.

He has also received cautions for separate incidents of affray and possession of cocaine.

The killer has now launched a bid for parole and could be freed this year, but James’ mother Denise Fergus, 53, has written to Ms Truss saying that he ‘still poses a serious danger to other families like ours’.

Following his release from prison in 2001, Venables is known to have been living independently by March the following year – some time thereafter beginning a relationship with a woman who had a five-year-old child, although he denies having ever met them.

He was then reported to have had a number of ‘younger girlfriends’ which suggested he was enjoying a delayed adolescence, while he also developed drinking and drugs problems and he compromised his identity at least twice by telling friends he was a convicted murderer.

But in September 2008, Venables was arrested on suspicion of affray after a drunken brawl. He had claimed he was acting in self-defence and the charges were subsequently dropped when he agreed to attend an alcohol awareness course. 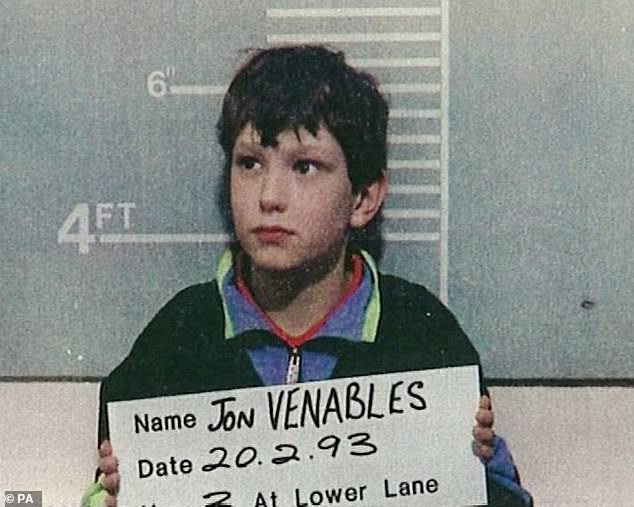 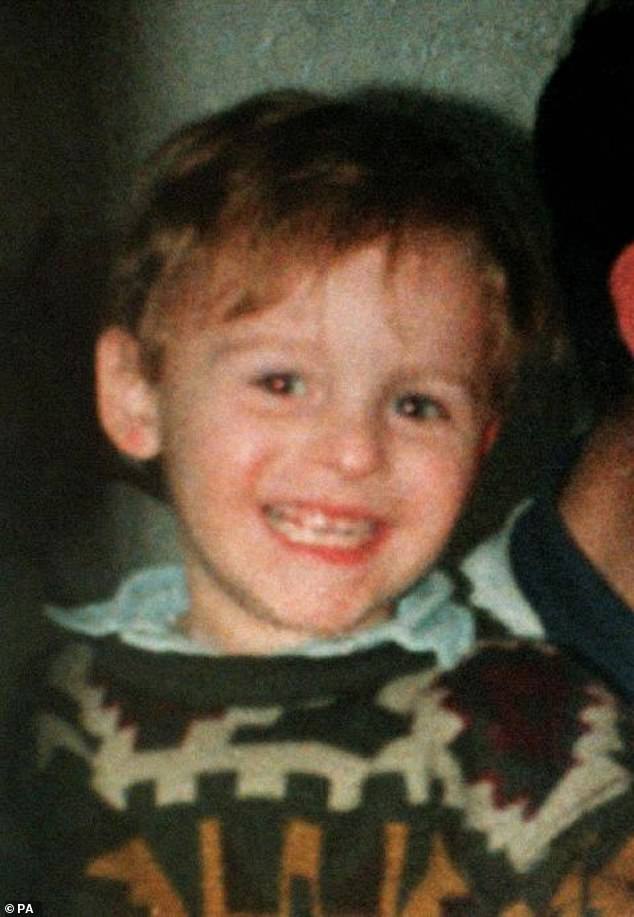 James Bulger, two, was found dead after he went missing in the Bootle area of Liverpool in 1993 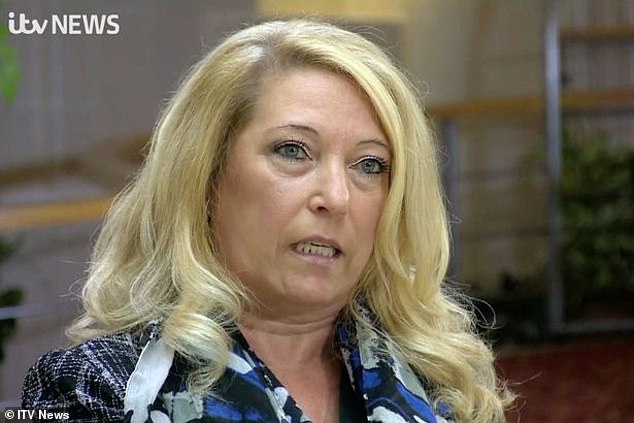 Denise Fergus, 53, has written to Liz Truss saying that Venables ‘still poses a serious danger to other families like ours’ 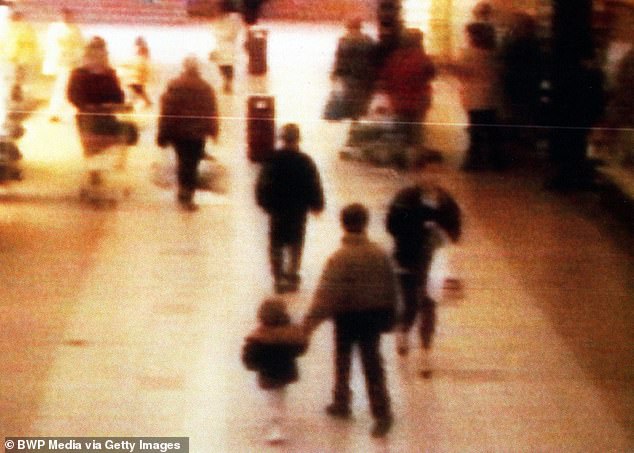 Venables was given a formal warning by the probation service for breaching the good behaviour terms of his licence.

Just three months later, though, Venables was cautioned and handed a curfew for possession of cocaine after he was found with a small amount of the class A drug.

And in 2010 he returned to prison for the first time since his release nine years earlier when he was found with dozens of indecent images of children at his home in Cheshire.

A probation officer had visited his address to discuss his fears that he could be in danger, but found Venables attempting to destroy the hard drive of his computer.

The hard drive was later examined by police, who discovered that it contained 57  indecent images.

Venables subsequently admitted he had posed online as a 35-year-old woman who had abused her eight-year-old daughter.

The images found included children as young as two being raped by adults.

He pleaded guilty to downloading and distributing child sex images and was jailed for two years.

During his second stint in prison, he was given yet another new identity because of the risk posed by a previous security breach. Venables was paroled again in 2013 and took on his fourth new identity.

But in February 2018 he was jailed for a third time, for 40 months, after pleading guilty to having more than 1,000 indecent images of children.

It included Category A pictures, the most serious, and a horrific paedophile manual.

Appearing at the Old Bailey via a video link that only the judge could see, the court heard Venables told police officers upon his arrest: ‘This is my own fault. I have let people down again.

‘I have had urges, inquisitive. It won’t be a slap on the wrist for me.’ 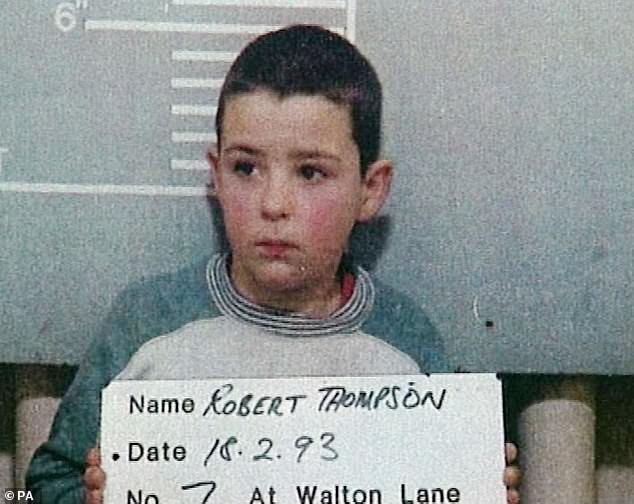 A police handout of Robert Thompson, who carried out the horrific killing alongside Venables 25 years ago 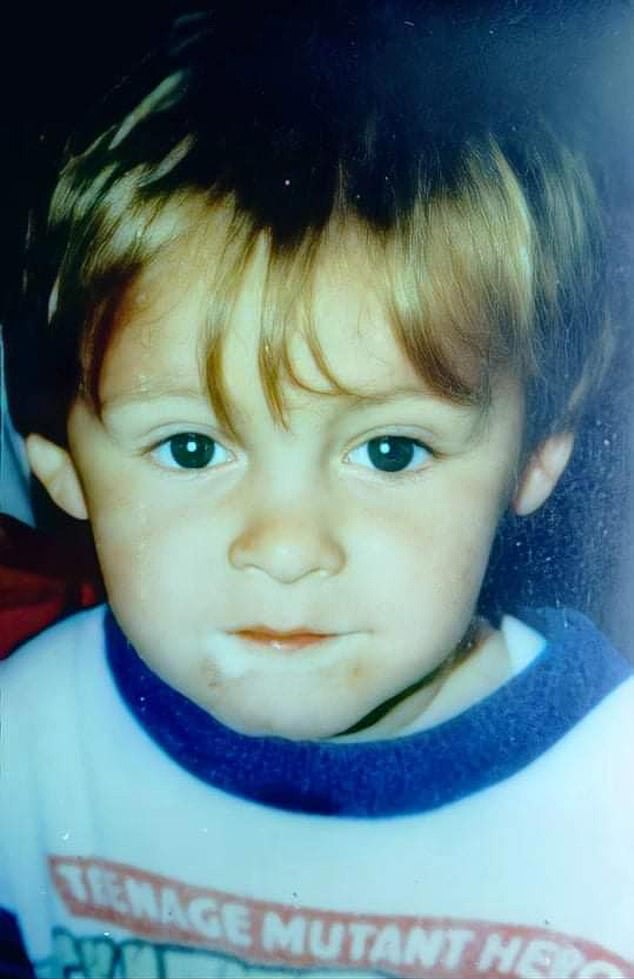 He pleaded guilty to possession of indecent images of children for a second time and was jailed for three years and four months.

Passing sentence, Mr Justice Edis said the children in the images were ‘often very young and vulnerable’ and there was ‘discernible pain and distress suffered’.

In Venables’ last failed bid for freedom in 2020, the Board said he still showed an attraction to sexual violence as the reason for keeping him locked up.

But he has launched a new bid to be released from prison and faces a hearing to decide whether he is rehabilitated having served his minimum sentence for the second child sex abuse images offences.

James’ mother Ms Fergus, though, has written to the Prime Minister urging the government to intervene and stop his release back onto the streets.

She told The Mirror: ‘We need the Prime Minister or her new Justice Secretary to step in immediately to make sure my son’s killer stays firmly behind bars where he belongs. We are calling on them to, please, intervene now.

‘I’ve got a list of questions I want to put to her and answers that I need. I don’t want to be fobbed off.

‘I am saying exactly how I feel. I’m saying how I feel so let down, again.’

It comes after she said she was ‘over the moon’ that the House of Commons agreed to debate her son’s murder and why his killer has been free to commit more offences.

Following a face-to-face meeting with then Justice Secretary Dominic Raab, Ms Fergus received an email saying the debate had been agreed and she would be notified when a date was officially set. 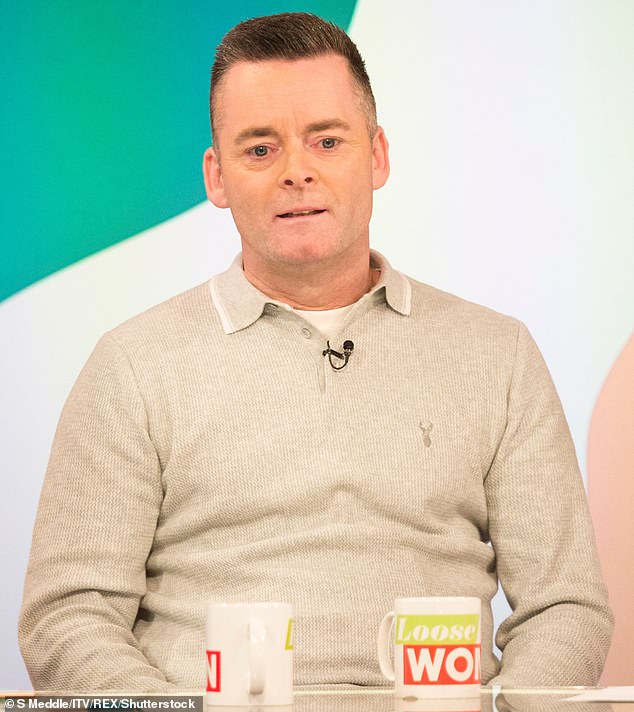 However, Mr Raab was sacked when Ms Truss became PM last month and she shelved the planned Bill of Rights reform.

Mr Raab’s new laws would have allowed ministers to block the release of the most dangerous criminals for public safety reasons.

It was also reported that new Justice Secretary Brandon Lewis has offered to meet Denise next week.

Venables and Thompson were given new identities to protect them from the risk of vigilante attacks and were made the subjects of so-called ‘Mary Bell orders’, lifetime anonymity court injunctions.

At the time of Venables’ first release from prison, a psychiatrist ruled that he did not pose a danger to the public and was extremely unlikely to commit any further offences.

Years later it emerged Venables had been detained in Vardy House – a small eight-bed section of Red Bank secure unit in St Helens on Merseyside – where it’s said he made such good progress he was kept there for eight years, despite it actually being a short-stay remand unit.

While Robert Thompson has not re-offended since being released on licence when he was 18 years old.

Though in 2006, reports claimed Thompson was in a stable gay relationship at age 23 and had settled well into his local community in the North West.

James Bulger: How the murder of a toddler shocked the nation

The murder of James Bulger was a vicious crime that shocked Britain.

Jon Venables and Robert Thompson were both 10 years old on February 12, 1993, when they abducted the two-year-old before brutally torturing and killing him.

The crime made the boys the youngest killers in modern English history.

The duo snatched James from outside a butcher’s shop in Bootle, Merseyside, in 1993, while his mother popped into a store for just a few seconds.

The boys were playing truant from school, and CCTV showed them observing local children at the shopping centre, appearing to be ‘selecting a target’.

They were then captured on camera taking the boy away at 3.42pm, before leading him on a two-and-a-half mile walk through Liverpool to the village of Walton.

Venables and Thompson were seen by 38 people during the walk, and were twice challenged by bystanders because James was crying and had a bump on his forehead.

But they were able to convince the concerned people that James was their little brother and continued on their way.

They led James to a railway line near the disused Walton & Anfield Railway Station where they began torturing him – including throwing paint in his eye, pelting him with stones and bricks and dropping an iron bar on his head.

After the body was found, police launched an appeal showing the low-resolution CCTV images of the boy.

The breakthrough came when one woman recognised Venables, who she knew had skipped school with Thompson on that day, and contacted police.

They were charged with murder on February 20 and forensic tests confirmed they had the same paint on their clothes as was found on James’ body.

Around 500 protesters turned out for their initial magistrates’ court hearing due to the public outcry against the crime.

The subsequent trial at Preston Crown Court and the boys were considered to be ‘mature enough’ to know they were doing something ‘seriously wrong’.

Venables and Thompson were found guilty on November 24, 1993, with the judge describing them as ‘cunning and wicked’.

Reporting restrictions on their names were also lifted as it was considered in the public interest to do so.

Their parents were moved to different parts of the country and also received new identities due to death threats against them.