On September 3, 2019, a group of men sailing the idyllic Abrolhos Islands 60 kilometres off the coast of Western Australia came across an unusual sight: a man in a hot pink T-shirt waving at them from a tiny island less than 100 metres wide.

Assuming he was stranded, the men went in for a closer look only to discover the mystery island dweller was not waving to get their attention, but rather shooing them away. 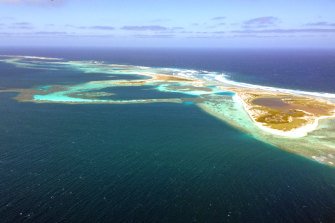 The Abrolhos Archipeligo is made up of 122 islands.

The encounter set off a chain of events that would lead to police converging on the sand mound and a last-ditch escape attempt by the pink-shirted man and his accomplice being thwarted by an angry seal.

The duo, skipper Antoine Dicenta, 53, and Graham Palmer, 37, were the international crew for what became one of Australia’s largest drug busts. If not for a series of at times comical errors, the MDMA, cocaine and methamphetamine smuggled on their yacht would likely have entered the country undetected.

Instead Palmer and his co-offenders Scott Jones, 38, Jason Lassiter, 47, and Angus Jackson, 52, were sentenced to between 22 and 33 years behind bars in the WA Supreme Court on Friday.

A lawyer for Dicenta told the judge he would apply to change his guilty plea to not guilty, and the judge said he would determine this at a later date. Dicenta was not sentenced on Friday. 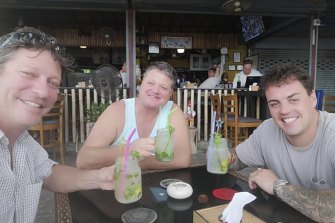 The plot to bring the drugs into Australia was hatched in Thailand and later instigated in Madagascar, where Dicenta and Palmer boarded a yacht named Zero with the intention to collect 380 kilograms of cocaine, 344 kilograms of MDMA and 171 kilograms of methamphetamine and sail more than 7000 kilometres to Australia.

In announcing the men’s arrests and seizure of the drugs in 2019, then-police commissioner Chris Dawson said the haul would have had an estimated street value of about $1 billion.

The transfer of the drugs from a South African port onto the yacht was accidentally recorded by Dicenta on his mobile phone, with the audio capturing the haste in which the men moved the 40 bags of narcotics.

“You have to put it inside before the other boat comes … this is not cocaine, this is the other thing, it’s not heavy at all,” Dicenta can be heard saying.

State prosecutors would later refer to the blunder as “the worst butt-dial in history”.

After six weeks at sea, at times in rough and dangerous conditions, the pair eventually arrived off the Geraldton coast, near where they had planned to transfer the drugs onto a local boat, DW 140, with Lassiter, Jackson and Jones on board.

The Abrolhos archipelago, while beautiful, is notorious for its shallow reefs, with the word Abrolhos roughly translating to “open your eyes” in Portuguese – a warning for sailors.

Multiple shipwrecks lie on the sea floor off the coast of the islands dating as far back as the 1600s when Dutch explorers sailed the West Australian coast. The mutiny aboard the stricken Batavia is the most famous story of the ill-fated ships which sailed through the islands.

The night before their capture, Dicenta and Palmer’s yacht ran aground on a reef, stranding them and their near-tonne of loot on the edge of Australia’s continental shelf. Desperate messages between the pair to the second boat revealed their pleas for rescue.

“Drifted a mile … we have no control where we end up,” one text read.

“Tell your friends to stop f—ing around and come and get us ASAP otherwise I will leave the girls here and get my own taxi out of here,” said another. 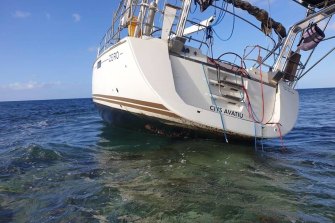 The stricken yacht run aground in the Abrolhos Islands.Credit:WA Police

Fearing they were exposed, Dicenta and Palmer bundled the drugs into a small tender attached to their yacht and headed east to Burton Island where they went ashore and attempted to hide the haul under seaweed in the dark of night.

Meanwhile, the DW 140 boat coming to their rescue also ran aground on a reef and was stuck waiting for the tide to rise.

Dawn revealed the abandoned yacht and the reefed second boat with the trio on board. Authorities boarded the empty yacht and commenced a rescue operation to find its occupants, while local fishermen’s offers to help free the DW 140 in exchange for a carton of beer were declined.

The sighting of the man in the hot pink shirt on Burton Island, coupled with police spotting a tender on the shore, led police to the island around 3pm. 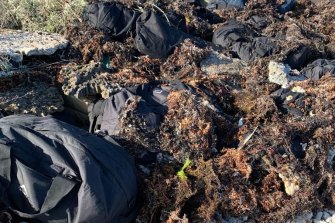 The bags of drugs discovered by police on Burton Island. Credit:WA Police

Dicenta and Palmer tried to flee, but there was nowhere to run, with an elephant seal blocking the path to their tender.

“They woke it up and it jumped up with its big chest out and bellowed at them,” Geraldton Volunteer Marine Rescue spokesman Damien Healy later told ABC Radio.

As the duo were taken into custody, police spotted another boat cruising slowly just north of the island. They noted its registration, DW 140, and the following day traced the vessel back to Jackson.

He and the other two crew members were arrested and denied anything to do with the drugs. They professed their innocence at trial, telling a jury they were simply on a boys’ fishing trip, but were eventually found guilty.

Then-WA Police assistant commission Col Blanch confessed at the time that if not for the series of errors and a tip-off from the local fishermen, the drugs would have soon found their way into Australian networks.

“We’ve come clean – we said we were fortunate, very, very lucky that they hit the rocks and the fishermen were out there to help us,” he said.

During sentencing, Justice Edwin Corboy said it was vital the lengthy jail terms deterred others from bringing large quantities of drugs into Australia, given the damage they caused.

The men’s jail terms will be backdated to when they were first taken into custody.

Jackson and Lassiter’s sentences carried a non-parole period of 23 years, while Palmer must spend at least 15 years behind bars and Jones must serve at least 17 years.

Corboy said the men – a mixture of nationalities and backgrounds hailing from France, Australia, the UK and the US – were “more than merely couriers transporting the drugs”, but accepted they did not have a lead role in the drug organisation.

However, Corboy said the quantity of drugs was “massive” and the men must have been promised a “significant financial restitution”, given their efforts.

29/07/2022 World News Comments Off on How a notorious chain of islands, a seal and ‘the worst butt-dial in history’ foiled a $1 billion drug run
Markets