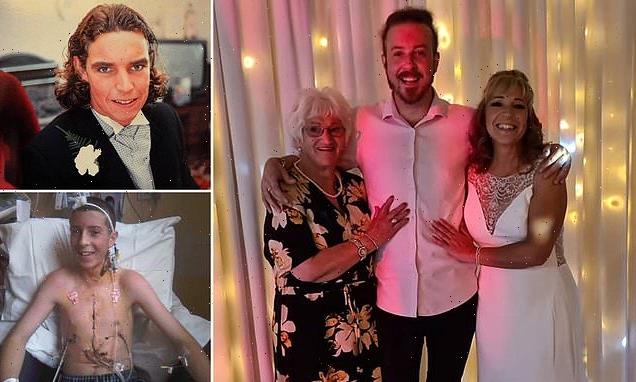 A heart transplant patient was filmed weeping as he shared a special moment with the the sister of his donor on her wedding day as she danced with him in memory of her 33-year-old brother.

Bride Julie Teasdale shared the emotional embrace with Scott Rutherford, 28, as they remembered her brother, John Carter, who died from a brain tumour in 2008.

Since birth, the 28-year-old actor suffered from ‘transposition of the great arteries’ – an extremely rare condition where the pumping chambers of the heart don’t function correctly.

Meanwhile John, a paint sprayer from Sunderland, married in 2004 and was ready to start a family when he died in 2008, just four weeks after doctors found a brain tumour.

Freda has previously said her son did not know he was going to die, which had been a ‘blessing’.

She said: ‘He went into surgery saying, “I can’t die. I have too much to live for”.

‘I never even got to say goodbye.’

In the video Freda can be seen dancing with Scott at the wedding, before going on to embrace and dance with Julie too. 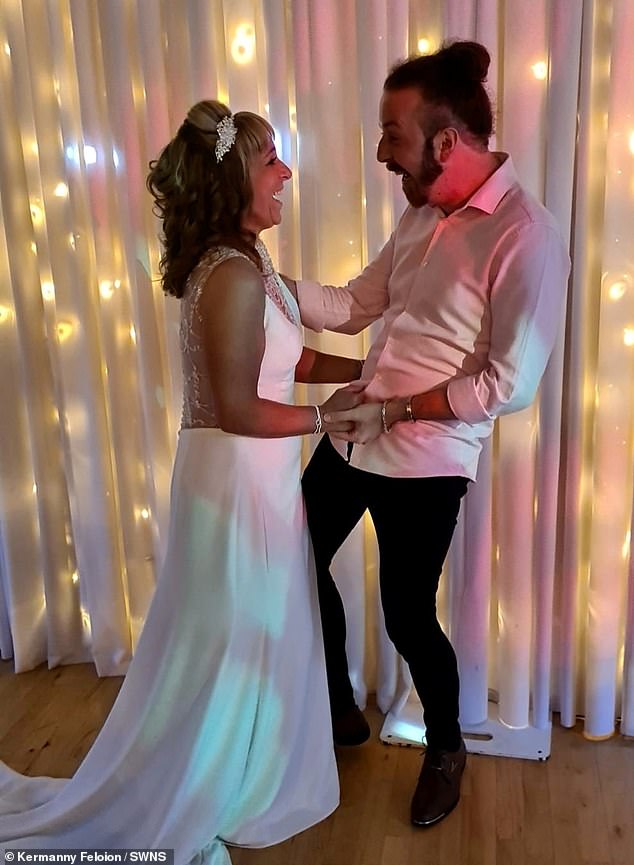 Scott Rutherford, 28, danced with his heart donor’s sister Julie at her wedding on Saturday (June 25). He was invited to attend and said he wanted to bring John, her brother, to the family on their special day 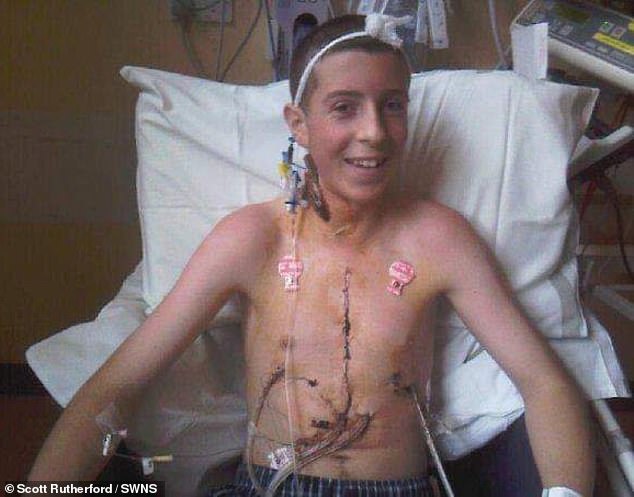 It is believed five people received John’s organs, and the family were told his heart had gone to a 15-year-old called Scott (pictured shortly after his life-saving surgery)

Freda was against donating his organs until his sister Julie, a nurse, helped change her mind.

Julie said to Freda: ‘Mum, if John needed some organ that would save his life, what would you do?’

Freda replied: ‘I would crawl on my hands and knees and beg them for it.’

It is believed five people received John’s organs, and the family were told his heart had gone to a 15-year-old called Scott.

Mr Rutherford later stumbled upon his donor family at a commemorative service, with Freda, John’s mother, going on to attend his birthdays and key life events.

He had four open-heart surgeries and ‘hundreds’ of medical procedures, before being struck down by heart failure at 14.

Fortunately he received John’s heart as a successful transplant a year later.

And last Saturday (June 25), an emotional Scott said he went to Julie’s wedding so that her brother John could be there with the family ‘in his own way’.

He said: ‘Freda just put her hand on my chest and felt John’s heartbeat and Julie did the same, and I think we all just shared that moment together.

‘It was really emotional. I had tears streaming down my face, but it was just so beautiful at the same time. It was like he was there in his own way.

‘I remember Julie saying when me and my partner left, “Thank you for coming, it made my night.”

‘And I said, “I wouldn’t miss it for the world. You saved my life, so of course, I’m going to bring John along”.’ 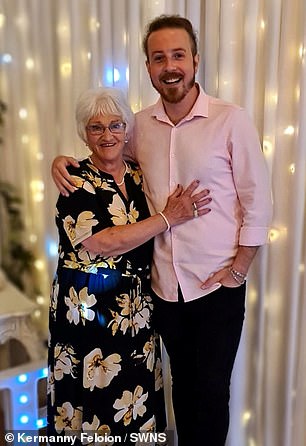 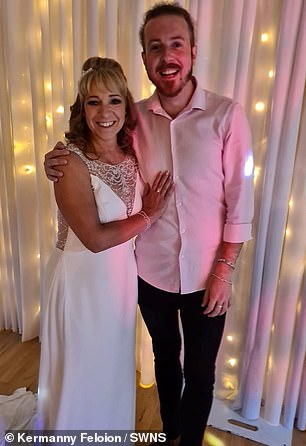 John’s sister, Julie, and mother, Freda, both shared a special moment with Scott and listened to John’s heart beating alongside them 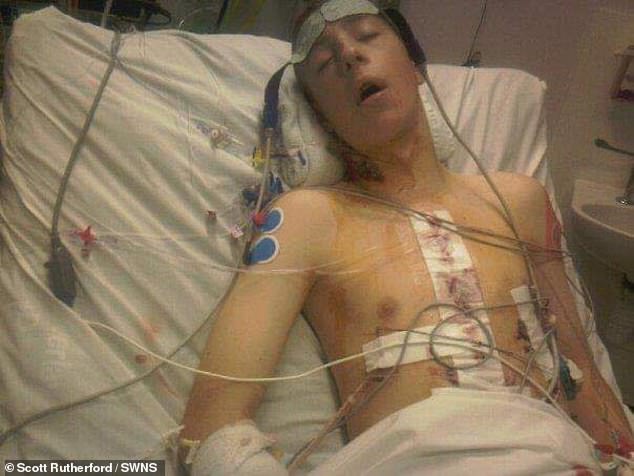 Since birth, Scott suffered from ‘transposition of the great arteries’ – an extremely rare condition where the pumping chambers of the heart don’t function correctly

Scott, from North Shields, Tyne and Wear, had his first open-heart surgery when he was just nine hours old – after specialist doctors discovered he had a congenital condition.

But when he got horrific heart failure aged 14, doctors told him the only way he would survive was to have a transplant operation from an organ donor.

He said: ‘When I was in heart failure it was probably one of the most horrendous times of my life. I was completely blue.

‘I couldn’t tie my own shoelaces; I couldn’t brush my own teeth. I couldn’t do a flight of stairs.

‘And I was told there and then there was no other option than a heart transplant and if I didn’t have one, then I would die.’

Scott found a donor a year later, at the age of 15, and had the successful operation so that he could live a normal life once again.

And while he lay in hospital he claims John Carter came to him in a ‘very strange dream’ and introduced himself – before he’d even learnt the name of his donor.

He said: ‘In the dream, I was sitting in a pub and this man sat next to me. He started talking to me and telling me that he had just finished work and he’d had a long day.

Scott always wanted to meet John’s family, but only bumped into them by chance when he volunteered to speak at an event for organ donors at the last minute.

He said: ‘I don’t know if it was fate – but something needed me to be there that day, because Freda and John Snr. had been going every year to that event.

‘That that was my first time going – and it was very last minute. I wasn’t even meant to be the original speaker. Something just needed me there.’

Since then, Scott and Freda have become close, with the pair referring to each other as their ‘heart-mother’ and ‘heart-son’ respectively.

And after Scott was introduced to John’s sister, Julie, a few years later, he said it was ‘incredible’ to be asked to attend her wedding last week.

He said: ‘It was just incredible. I remember seeing Julie come in with her husband and seeing her in this beautiful wedding dress.

‘I could feel myself tearing up straight away as it was the first time we had been reunited since the pandemic, so we hadn’t seen each other for three and a half years.

‘Then Freda, John’s mum came over to me, pulled me up, and I just stood cuddling his mother, just swaying from side to side, with her hand on my chest.

‘And then she took me to the dance floor, and that’s when I went in the arms of Julie, and we just shared this lovely moment together, dancing and swaying to this song, feeling John present there.

‘It was just a really poignant and beautiful moment. It was a momentous occasion – so special and so precious.’