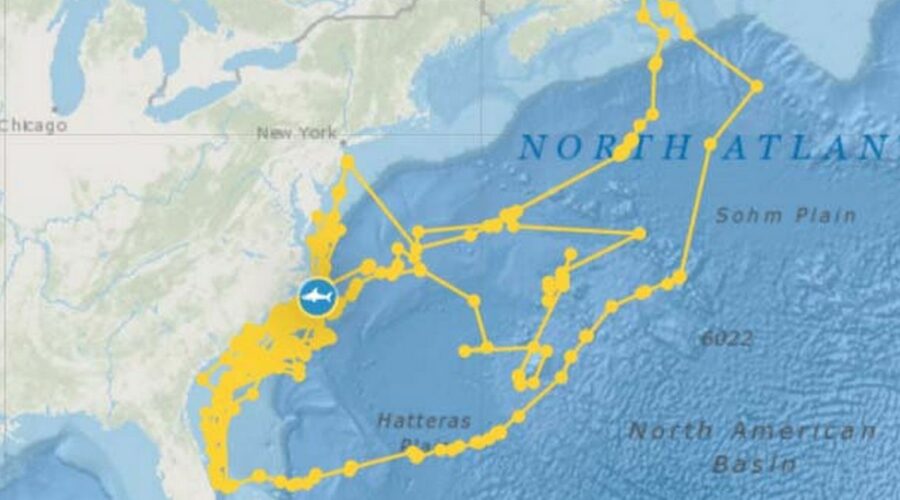 A huge 13ft great white shark "trolled biologists" by drawing a "self portrait" in the ocean with GPS points.

Named Breton after Cape Breton, the ocean predator was the first shark to be tagged as part of OCEARCH's expedition to Nova Scotia in September, 2020.

And the group's researchers were "trolled", according to one commenter, after Breton was tagged for research purposes and he drew a shark shape in the Atlantic Ocean.

The 1,437lb creature has travelled along the US East Coast off New Jersey, Chincoteague, Virginia and Long Bay, South Carolina. In that time, GPS locations were 'pinged' from a device fitted to his dorsal fin every time he surfaced.

Incredibly, Breton managed to map out the shape of a downward-swimming shark in his 444-day journey, with a fin touching the US coast just off Brick, New Jersey.

Breton's location was first tagged on September 12, 2020 at 1am at Scaterie Island, Nova Scotia.

Recently, Breton has been tagged on September 21, 2022 at 3.29am off the coast of Baie de Plaisance, Quebec. OCEARCH has been tracking marine life for 15 years, and has so far tagged more than 400 animals to help teach us more about their habits.

The charity even broadcasts its shark tracker live, meaning anyone can see which sharks – which have all been given names – are where at any time.

Sharks are caught in the ocean from tenders and tagged by dedicated teams of scientists while keeping their gills covered with water so they can breathe.

It means the scientists can take data such as their sex, size and even samples for laboratory studies.

This also helps identify diseases and problems faced by the ocean's shark population.

Known as the ocean's greatest predators, great whites can grow up to 4m long and live for up to 60 years.