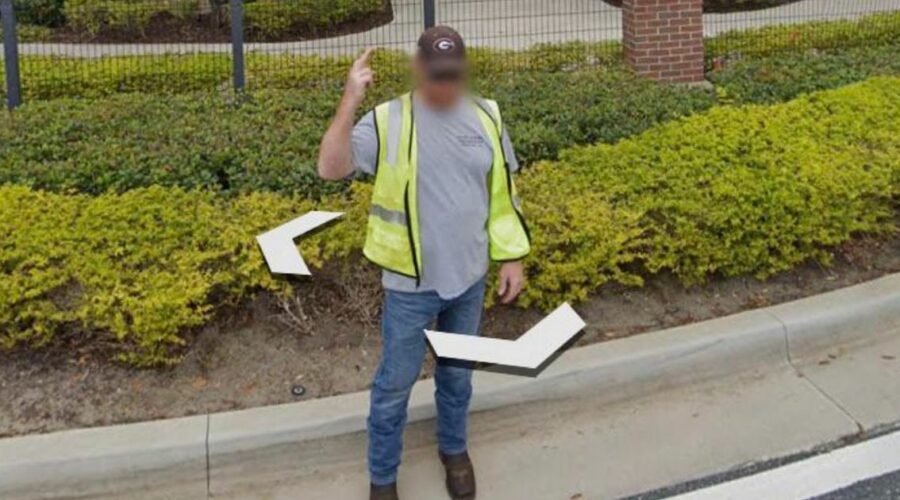 A Google Maps user has spotted a man appearing to flash a rude gesture at the Street View car.

The image, uploaded to Reddit, was titled: "Dude flipping off the street view car."

It shows a man wearing a yellow hi-viz jacket standing by the side of the road appearing to show his middle finger at the camera.

The Street View car is often on the receiving end of rude gestures but some members of the public are slightly more polite.

Recently a Google Maps user picked up an unnamed individual waving to the car using the caption: "Say hello to the camera!"

Many comments praised the t-shirt of the individual, while others speculating about where the happy chap was.

Some thought the picture was taken in Israel.

One said: "I bet this is Israel," later adding when asked about why he thought that: "Well I live there, can't exactly explain how can I tell, but I simply know it."

Another said: "This friendly guy made me happy."

Another user spotted two other men appearing to give the finger to the Google camera.

The picture, taken in the US city of Philadelphia, was uploaded to Reddit with the tagline: "These guys don't like Google driving through their neighbourhood."

One cheeky Reddit user wrote: "That sign they are showing means peace among worlds. So obviously they love the Google car in their neighborhood."

Google Maps fans are often coming across weird and wonderful happenings on the site.

One spotted four people dressed as Teletubbies walking down a Russian street.

One person joked: "Looks like the Google Maps street crew, since it’s cold they are wearing the boiler suits."