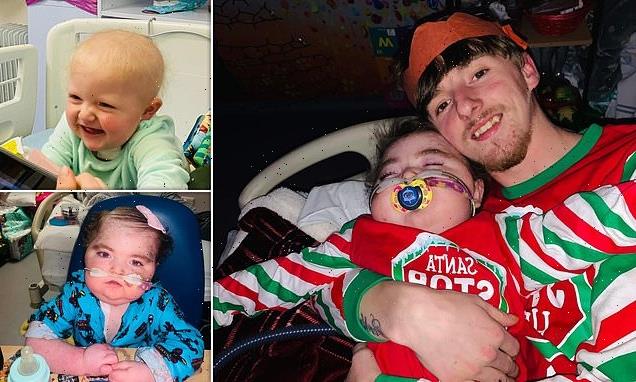 Girl, three, given just days to live after brave 15-month fight in hospital following leukaemia diagnosis as devastated mother says ‘nothing could have prepared her for the news’

Porsha Williams, three, was diagnosed with acute myeloid leukaemia in September 2021, and has spent every day in Noah’s Ark Children’s Hospital in Cardiff since.

Porsha, from Merthyr Tydfil, had her last chemotherapy treatment in November 2021 and has been in remission since. 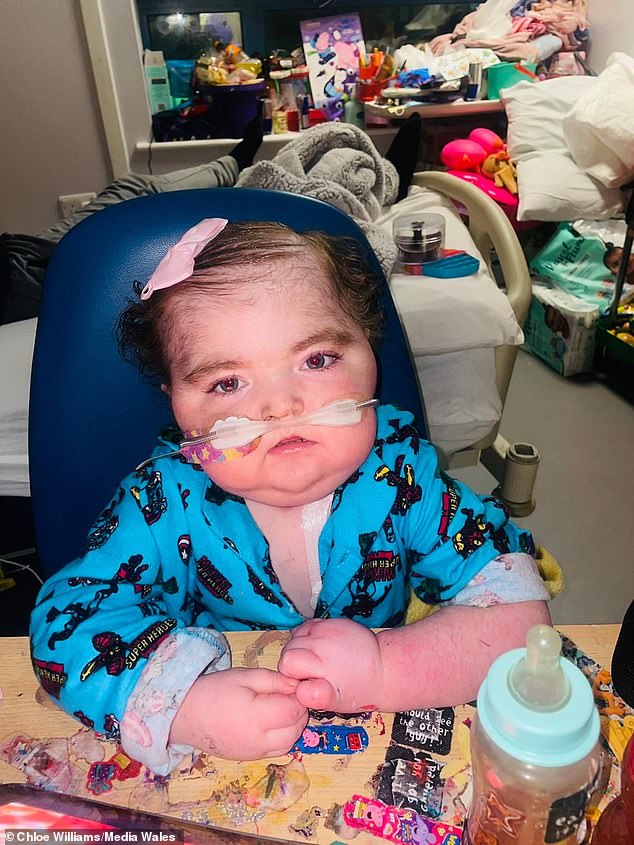 Porsha Williams, three, from Merthyr Tydfil, had a bone marrow transplant in January where she was diagnosed with graft versus host disease 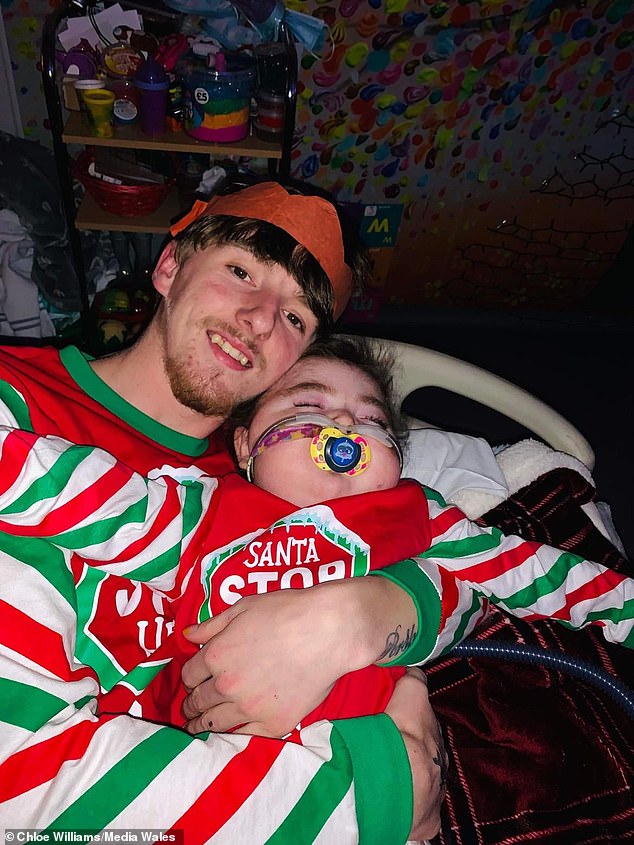 Father Jamie with his daughter Porsha, who has been told she has days to live after a 15-month fight

It is caused when donated cells – referred to as the graft – see the body’s cells as foreign.

Many cases of the disease can be treated successfully according to medical experts, but some can cause severe and possibly fatal damage to the organs.

Porsha’s mother Chloe Williams, 22, said she has been told that the damage caused to her daughter’s lungs is fatal.

A week ago, she was told Porsha had around three days to live, but she is still fighting from her hospital bed where Ms Williams, Porsha’s father Jamie, her one-year-old sister Maemae, and grandparents Lynda and Lian were able to spend time with her on Christmas Day.

‘It’s attacked her eyes, her gut, her bladder, her skin has gone up red and is peeling,’ Ms Williams told WalesOnline.

‘I’ve phoned Great Ormond Street Hospital and asked them if they can help because Cardiff and Bristol have run out of options. I’ve got to prepare myself for it, no matter how hard it is.

‘I’ve done everything I can for her, all I can do now is share her story of how she fought the biggest fight for 15 months.

The mother-of-two said nothing could have prepared her for the news of her daughter’s prognosis.

‘Honestly I’m gobsmacked. Heartbroken. I couldn’t believe what I was hearing. We just want people to realise how amazing she’s been – and how amazing it is that she’s still fighting.

‘You can see she is very poorly now. She can speak, she’s just really tired. We are working as a team to get through it and taking each day as it comes.’

Porsha is now on a breathing machine, and her parents said they ‘can’t thank staff at the hospital enough’ for their efforts looking after her.

Both of their children were in intensive care at the hospital at the same time. Maemae, who had Down Syndrome and required brain surgery in March, also spent November until March at Noah’s Ark. 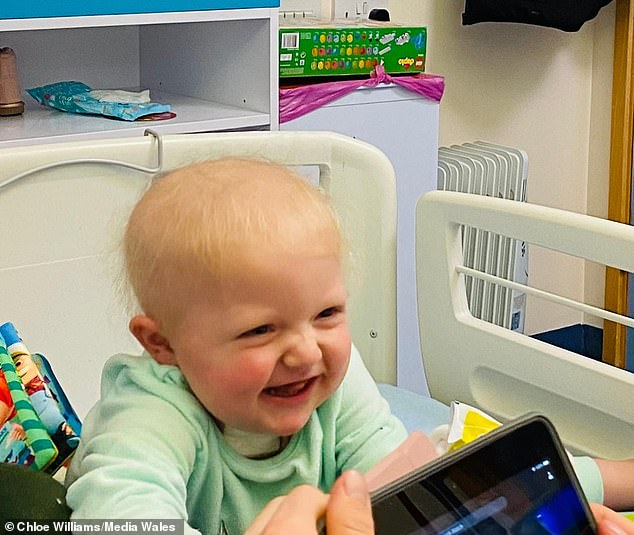 Remembering Porsha before her diagnosis, Ms Williams continued: ‘She was a bright, bubbly, normal child who was a real daddy’s girl’ 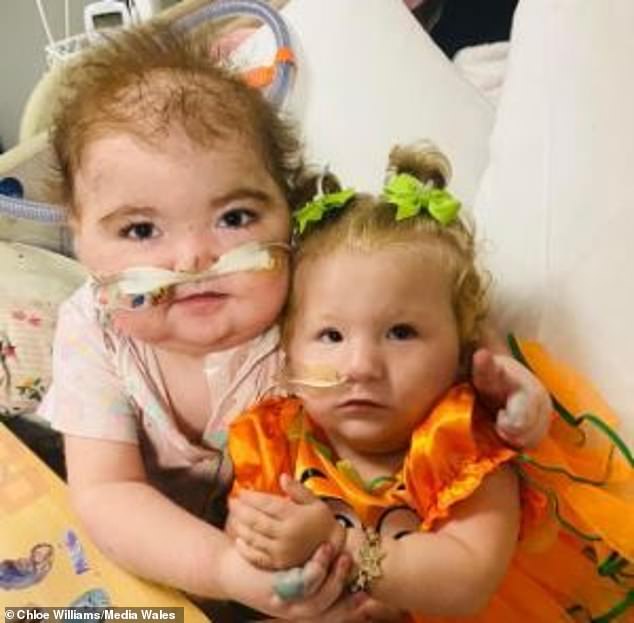 Maemae, who had Down Syndrome and required brain surgery in March, spent also November until March at Noah’s Ark 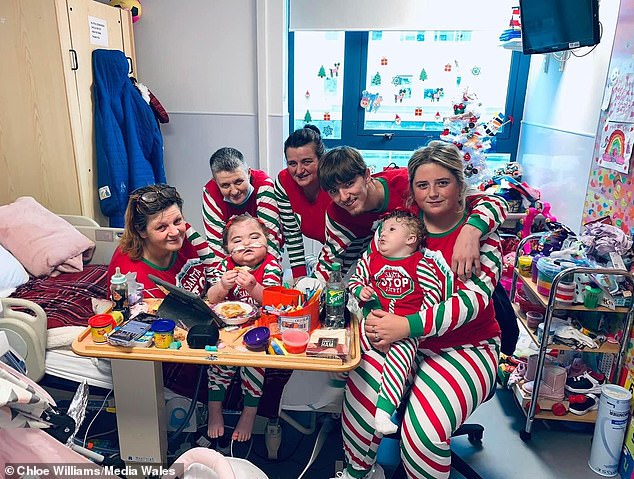 Ms Williams, Porsha’s father Jamie, her one-year-old sister Maemae, and grandparents Lynda and Lian were able to spend time with her on Christmas Day

Remembering Porsha before her diagnosis, Ms Williams continued: ‘She was a bright, bubbly, normal child who was a real daddy’s girl – always has been a daddy’s girl, and who loved playing in the garden and colouring.

‘She was the happiest little girl, the happiest thing you’d ever met. Since she came here she’s not been the same child – she doesn’t want to play.

‘We bought her a phone for Christmas to put a smile on her face and she doesn’t want to play with that.

‘We couldn’t do anything really [on Christmas Day] – we just sat down and opened a few toys with her and her sister, and she was smiling. But it certainly wasn’t the Christmas we wanted or hoped for.’

Now heading into her sixteenth month at the hospital, Ms Williams said she is hoping for a miracle that someone can come forward with a treatment that can help Porsha.

She added: ‘I’d love to go home and run away sometimes, but we know this is where she needs to be. We’ve been in the Ronald McDonald house opposite and it’s been really lovely there – we’d be lost without it.

‘They’ve been brilliant – I can’t fault the help she’s had. We’re very young parents and we just wanted to be there for our kids.’

26/12/2022 World News Comments Off on Girl, three, given days to live after 15-month fight in hospital
Markets