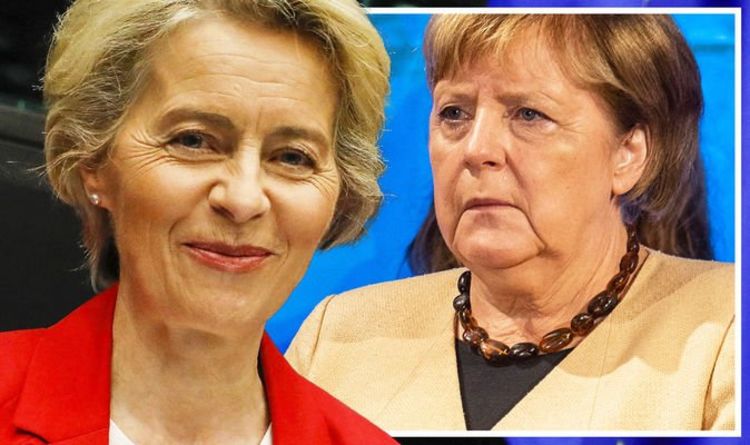 Earlier this month, Ursula von der Leyen’s European Commission dropped a bombshell stating that they may not be able to pay out flood aid to Germany, amid concerns there are no reserves left to provide. According to the letter penned by the Commission President to the Green MEP Rasmus Andresen, it seems unlikely that the promised financial aid will be delivered, a feat which leads the area to “remain vulnerable to future disasters”, an expert has warned.

The news that funds have been allocated to other regions affected by natural disasters, and leaving the pot empty, will not be welcomed by regions in Germany devastated by floods in July.

The instance has been referred to by climate-technology innovator Greg Johnson as the “largest” disaster over the past 12 months and stated that it “deserves special consideration”, but there is no money to allocate.

It comes following claims that the European Commission’s funds for aid after natural disasters has likely been almost completely used up this year, and the situation has worsened thanks to the coronavirus pandemic.

Mr Johnson, whose work focuses directly on sustainable infrastructure designed to combat climate-related flooding, told Express.co.uk: “From what I understand, the EU Commission is facing a solvency issue due to the allocation of funds for various disasters in other EU regions.

“The Germany disaster is the largest over the past 12 months and deserves special consideration, however the money simply isn’t there.

“On the heels of a pandemic and the climate crisis rearing its head, nations need to focus on preparedness and resiliency.”

€1.2billion is the annual upper limit in the EU budget for the “reserve for solidarity and emergency aid”, but this has been divided across other regions leaving others to fend for themselves.

If Germany doesn’t receive the necessary financial support to rebuild critical infrastructure in a timely manner, citizens and small businesses will be at risk, according to Mr Johnson.

He added: “We need to consider the social impacts, as being displaced by an extreme weather event like this is likely traumatic and emotionally stressful for citizens; some of whom lost everything.

“The ability to rebuild these communities without sufficient aid would be daunting and perhaps not possible.”

Mr Johnson, the co-founder and CEO of AquiPor Technologies, which developed an ultra-permeable pavement solution designed to accommodate large amounts of stormwater during large-scale rain events, has outlined that receiving the aid would “instil hope and emotional stability” for German citizens affected by the conditions over the summer.

He said: “Ample financial aid to reconstruct streets, bridges, and critical infrastructure would improve the safety and stability of these communities dramatically.

“Additional aid to areas where victims were left with nearly nothing would instil some hope and emotional stability, and some small business aid would give business owners, many of whom were already struggling due to the pandemic, a proverbial life-raft to keep them afloat and give some life to local economies.”

He claims that the recent influx of natural disasters has further emphasised the importance of developing disaster protection measures and “financial aid could be used to build infrastructure systems that are inherently more resilient to impending natural disasters”.

While experts have warned about climate-driven extreme weather events in the past, many communities have not developed critical infrastructure with this in mind so could be further susceptible to devastation.

Mr Johnson also claims that as the effects of climate change become apparent through unpredictable and extreme weather events, but “many regions are ill-prepared”.

He uses the US as another example, and refers to the debt facing its National Flood Insurance Program, and claims the scheme is in “billions of dollars in debt at a time when urban and pluvial flooding seems to happen much more frequently in cities”.

Elsewhere, during the summer of 2021, many global communities were battered by the effects of unprecedented flood events.

Mr Johnson identified that without receiving emergency aid, or financial and infrastructural support from their governments, “European communities will be pitifully unprepared for the future of our climate” and any further natural disasters.