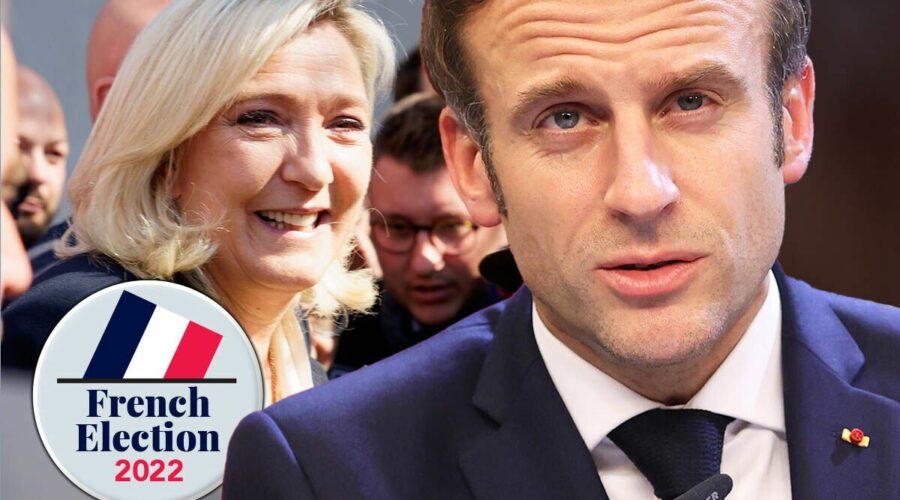 France will head to the polls today to either reelect Emmanuel Macron or install their first-ever far-right leader Marine Le Pen. In what has been a tightly run contest, Mr Macron has ditched his attempts at diplomacy with Vladimir Putin and stepped up his campaigning since the first-round vote – but his long-time rival has undercut him with her focus on France’s cost of living crisis and security concerns.

What’s the story so far?

Mr Macron and Ms Le Pen were both pushed into the second and final round of voting when the electorate chose them as the top two candidates on April 10, with the incumbent leader winning 27.84 percent of the vote, while Ms Le Pen won 23.15 percent.

Since the pair went through to the second round run-off, Mr Macron has been heavily criticised by Ms Le Pen for failing to show up while he has been dealing with the war in Ukraine.

His political rival has used his absence to garner considerable support from all corners of the country, keenly focussing on the cost of living nightmare plaguing the country and appealing to those who want France’s involvement with the EU to be reduced.

To secure victory, Mr Macron needs to win over a substantial number of those who backed other candidates from across the political spectrum and persuade them to turn out and cast their votes for him.

There has been substantial fear growing that many disillusioned young French people will not bother to cast their ballot – which could jeopardise Mr Macron’s chance at a second term in office.

Will there be an exit poll?

Exit polls in France are remarkably accurate due to the staggered closing of polling stations across the nation – meaning actual ballots are being counted ahead of all voting booths closing.

All votes must be cast before 8pm – with smaller towns and rural areas closing at 7pm, and large cities closing an hour later.

This means an exit poll will be published shortly after 7pm BST for UK followers.

What time will the result be announced?

Full results are expected later this evening, with regional results trickling in throughout the night.

The popularity of the current president has taken a beating since the 2017, but the war in Ukraine has somewhat boosted his chances as the electorate looks for a standing hand during an international crisis.

However, Ms Le Pen’s firm stance on workers rights and the cost of living crisis has attracted voters, particularly those in rural areas.

What do current polls say?

Pollsters currently have Mr Macron as the favourite to win and take on his second term in office – but Ms Le Pen hasn’t been far behind her rival.

On Friday, an Opinionway poll predicted Mr Macron would win again with 57 percent of the vote.

More recent polls are not available due to France’s rules on publishing in the immediate vicinity of polling day.

24/04/2022 World News Comments Off on French election results: What time will results be announced, will there be an exit poll?
Markets