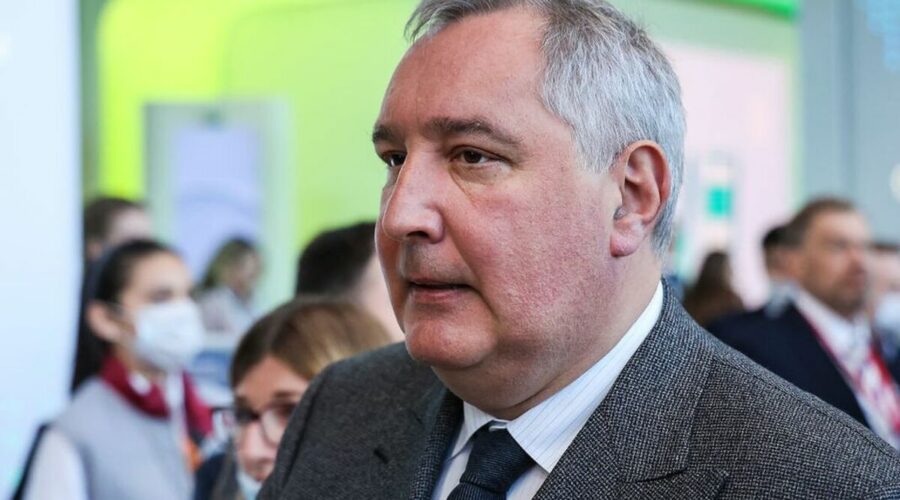 Russia: Solovyov threatens to 'prosecute' west in The Hague

The former head of the Russian space corporation Roscosmos has been injured in the city of Donetsk an area that has been under Russian control since 2014, reports suggest. According to the largest Eastern European media NEXTA, Dmitry Rogozin was wounded during the shelling of a hotel in the city.

Mr Rogozin was reportedly celebrating his birthday in a restaurant when the attack happened.

Russian media has reported that Mr Rogozin received a shrapnel wound to the soft tissues of the head.

They also reported that he received a shrapnel wound to his bottocks and his left thigh.

It has also been reported that Vitaly Khotsenko, the chairman on the self proclaimed separatist Donetsk People’s Republic (DPR), was also injured in the attack.

In comments reported by NEXTA, Mr Rogozin conformed that he had a lucky escape.

He said: “Wounded in the back. I will live.

“The shrapnel [passed] a centimeter from my spine.”

Mr Rogozin, a former Russian Deputy Prime Minister and ambassador to NATO, made a number of controversial comments in relation to the war in Ukraine prior to his dismissal.

In February, he announced that Western sanctions against Russia could result in the uncontrolled deorbiting of the International Space Station (ISS) onto the territory of various countries.

Later that month he posted a video threatening to leave US astronaut Mark T Vande Hei in space.

This followed up by a mocked-up video of astronauts saying goodbye to Mr Vande Hei and detaching the Russian segment of the ISS.

In March Rogozin posted a video twitter showing the American, British and Japanese flags being removed from a Soyuz rocket to be replaced by the Z symbol in support of the invasion of Ukraine.

Following these comments Mr Rogozin engaged in a social media spat with NASA astronaut Scott Kelly who he branded a “moron.”

In May he slammed Elon Musk for sending equipment to the “militants of the Nazi Azov battalion” and the following month called for Ukraine to be destroyed completely.