The deadly floods inundating homes in central and northern Victoria are not expected to recede for up to a week, as emergency services warn of some of the “largest evacuations that we have ever seen” in coming days.

Floodwater claimed the life of a 71-year-old man found drowned in his backyard in Rochester, where SES crews performed 160 rescues for people who refused to leave after an evacuation order was issued on Friday. 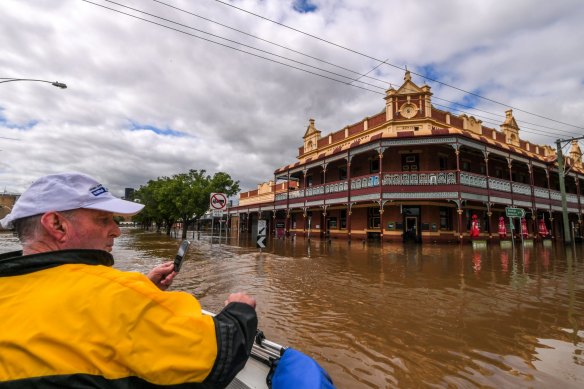 The Shamrock Hotel in Rochester surrounded by floodwaters.Credit:Justin McManus

Evacuation warnings were issued for the towns of Shepparton and Echuca as water moved down the Goulburn and Campaspe rivers on Saturday afternoon, with some people told they could be away from their homes for a long period.

“We can’t emphasise enough that when we issue an evacuation warning that is serious. We are asking people to leave and not stay in their homes,” said Tim Wiebusch, head of the State Emergency Service.

While very little rain fell on Saturday, the rivers continued to swell. There were 583 properties impacted by flooding, with that number expected to increase dramatically over the coming days.

Residents of the central Victorian town of Mooroopna, which neighbours Shepparton, were also told it was too late to leave with floodwater expected to inundate homes on Saturday evening and Sunday morning. 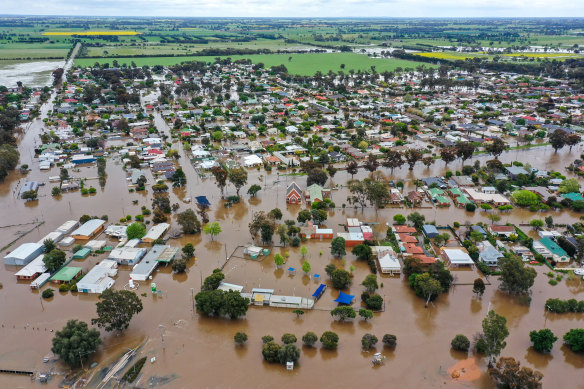 The Midland Highway, the major road that connects the two towns, was closed on Saturday evening.

The water level on the Goulburn was expected to exceed the major flood level of 11 metres overnight, with the possibility it could hit 12 metres on Tuesday. The river reached a height of 12.09 metres in the 1974 floods.

The river level peaked in Rochester at midnight on Friday, however it was not expected to drop significantly before Monday.

“They are in very flat areas so it takes time for water to be flushed [away] and for the river level to go down,” said Bureau of Meteorology senior hydrologist Yves Bessard. 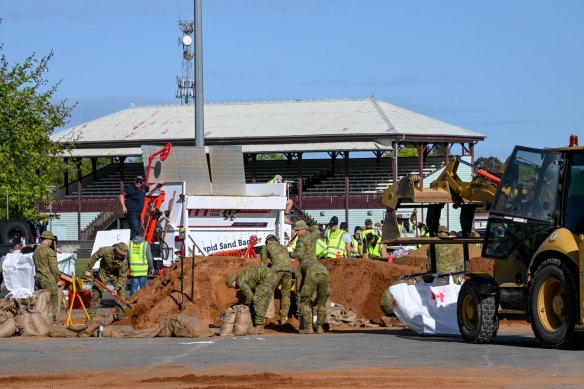 A sandbagging operation at Shepparton, where an evacuation order was issued.Credit:Eddie Jim

Echuca residents were told to prepare to be away from their homes for up to 10 days, as two swollen rivers bear down on the border town.

“If we talk about the towns near the Murray River, we could see major flooding last for a week, and that’s because the river level is very high,” said Bessard.

In addition to the Campaspe, which will bring flooding to Echuca over the weekend, the Murray will also rise towards the middle of next week as water flows into the system from the Mitta Mitta, Ovens and King rivers.

“Imagine that water coming down from the Campaspe River, it will meet the Murray and that will prevent water flushing through the Murray River,” said Bessard.

Wiebusch, from the SES, said it was a “delicate situation” in Echuca, which last experienced major flooding in 1993.

“You need to be alert to your conditions and need to be preparing to evacuate, particularly if you’re in areas within some distance of the river,” he said.

“Don’t expect that just because you might be a kilometre or two away that it won’t impact you.”

With large regional towns on alert, Victoria Police Assistant Commissioner David Clayton also urged people to listen to the advice of emergency services before it was too late. 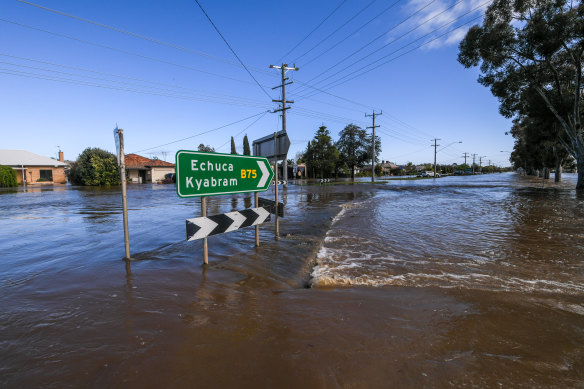 The floods are expected to hit Echuca over the coming days.Credit:Justin McManus

“We anticipate that in the coming days we’re going to see some of the largest evacuations that we have ever seen, so please heed those warnings and evacuate when you’re asked to,” he said.

As many as 4000 properties could be flooded in Shepparton, where a mammoth sandbagging operation was under way on Saturday.

A queue of cars gathered at the Shepparton Showgrounds to collect the maximum allocation of 25 bags, which were being produced by a machine trucked down from Sydney capable of making 1000 each hour.

Shepparton resident Liza Costigan said she didn’t believe the 25-bag limit would be enough to save her house if the water got high enough.

“Hell no,” she said. “Depending on where the water comes in, it’s only going to cover one side of the house, but I’m not sure what else I can do.”

Residents in the town of Murchison, north of Seymour, were also urged to leave on Saturday as the Goulburn River threatened to reach 11.9 metres, just shy of the record of 12.22 metres.

Charlton, in the state’s west, was issued with an evacuation order as the Avoca River approached the flood levels last witnessed in 2010-2011.

Electricity suppliers Powercor and CitiPower say they may be forced to turn off substations in Charlton and Mooroopna due to flooding.

“If significant flood water does reach either of the substations this may pose a major safety risk, so we may need to de-energise them to protect the community and reduce the risk of long-term damage to infrastructure,” a spokeswoman said. 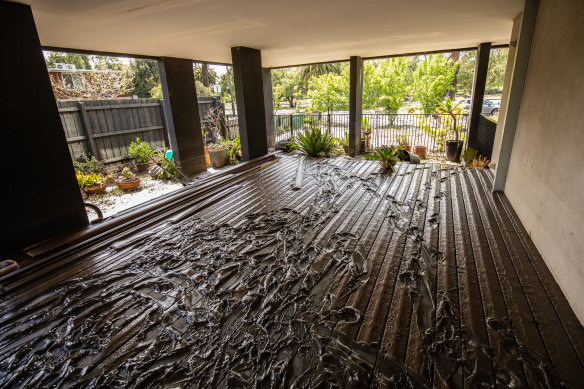 A house in Maribyrnong full of mud after the floodwater receded.Credit:Scott McNaughton

Parts of the McIvor Highway at Axedale, south of Rochester, were washed away and left a crumpled mess of asphalt and dirt after the Campaspe burst its banks.

The federal and state governments have agreed to use the recently retired $580 million Mickleham quarantine facility as emergency accommodation.

The facility will reopen early next week for 250 people, with crisis accommodation available for six to eight weeks, but its actual use will depend on demand, the Victorian government confirmed.

In Melbourne, a massive clean-up job was under away after the Maribyrnong River receded and people were able to properly inspect their mud-strewn homes.

Piles of damaged household goods, furniture and clothes piled up on the footpaths along Oakland Street, one of the worst-affected streets.

Residents used brooms and rakes to clear their driveways and gardens of ankle-deep mud.

A total of 245 homes in the inner north-west suburb flooded on Friday, the SES said, far exceeding the 60 initially predicted.

15/10/2022 World News Comments Off on Flooding to remain for ‘for a week’, as swollen rivers bear down on Echuca
Markets