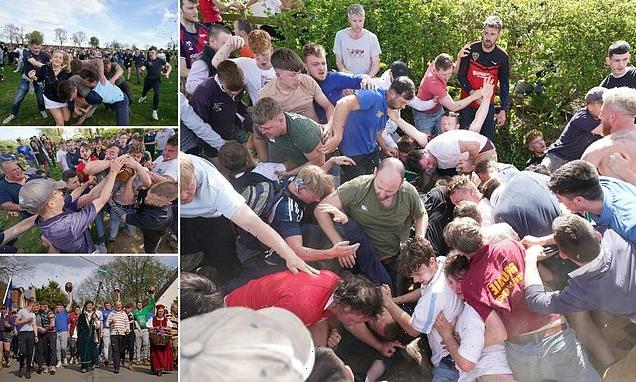 Don’t lose your BOTTLE! Fists fly and beer spills as hundreds of Leicestershire villagers go to war in the annual Easter Monday ‘Bottle Kicking’ battle between Hallaton and Medbourne

Locals from two neighbouring villages have been left bloodied after competing in a 1,000-year-old game of ‘bottle-kicking’ for the first time in three years.

Residents of Hallaton and Medbourne, Leicestershire, have been competing against each other to get a wooden beer cask across each other’s boundary as part of an Easter Monday tradition.

The annual event, cancelled in 2020 and 2021 due to Covid, is claimed to date back to Pagan times.

It reportedly first started when a local vicar gave poor residents in Hallaton a pie and beer every Easter Monday, which Medbourne residents subsequently took.

But villagers were back at it again today as crowds filled the streets and tussled over an old fashioned barrels sealed closed with a wax stamp depicting a hare.

The day begins with a parade through both villages in which locals carry a large hare pie and three ‘bottles’ – two filled with beer and a third ‘dummy’ barrel painted red and white and filled with wood. 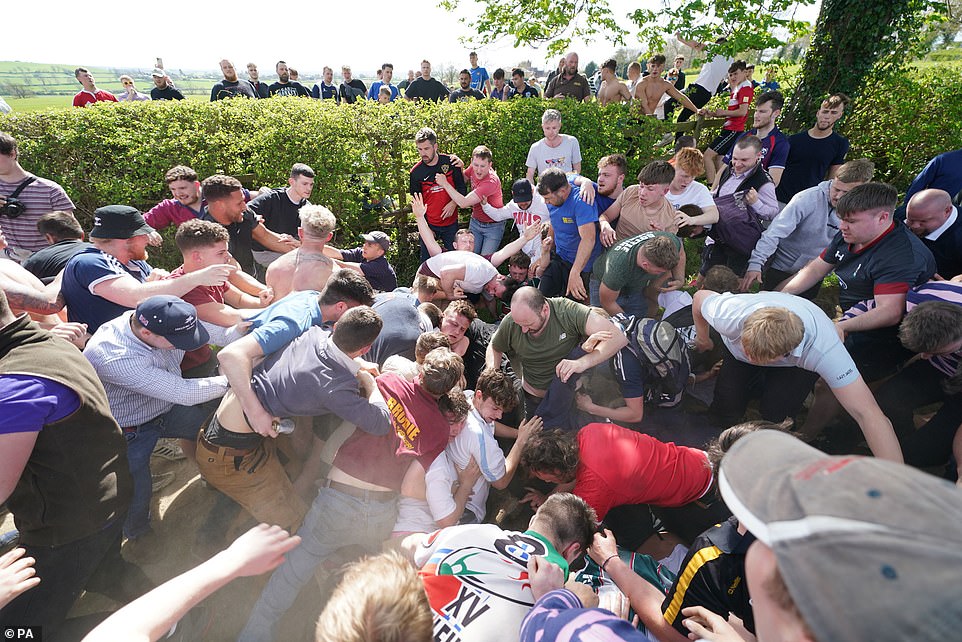 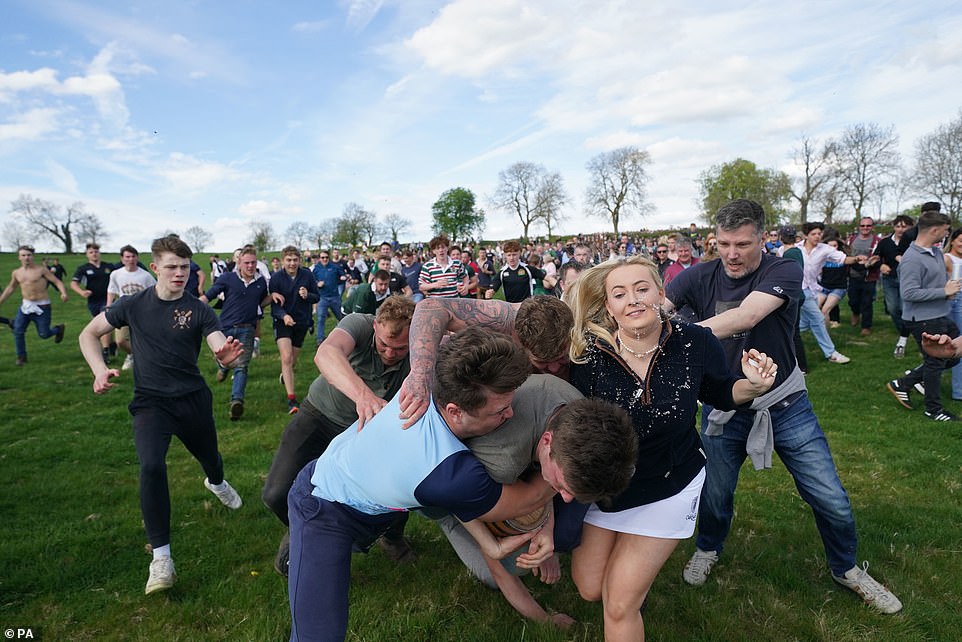 A player carrying the ‘bottle’, an old field barrel holding about a gallon of beer, crashes into a female spectator during the traditional game 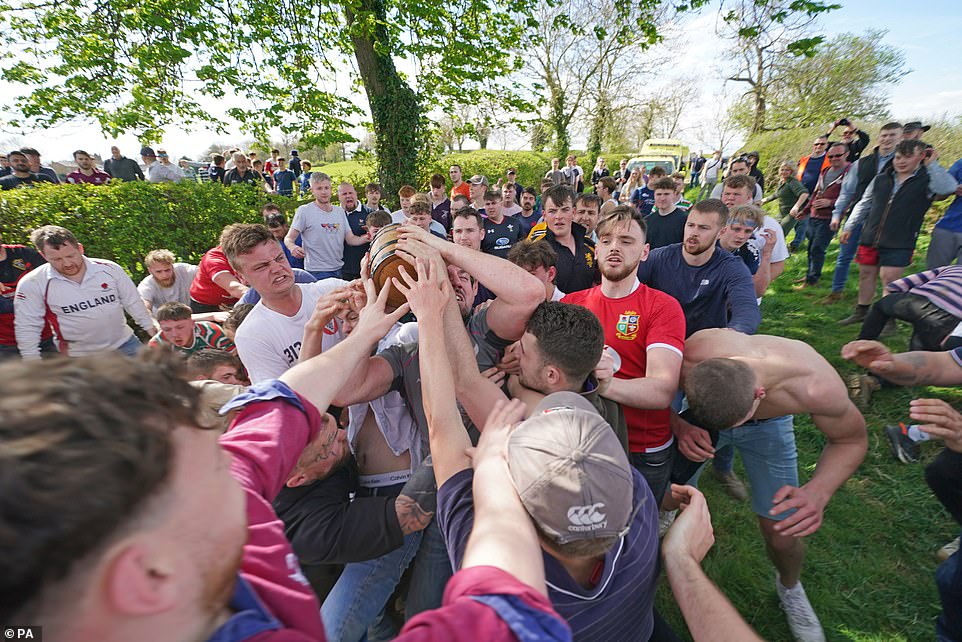 Villagers, some topless or wearing ruby attire, scramble to get their hands on one of the barrels 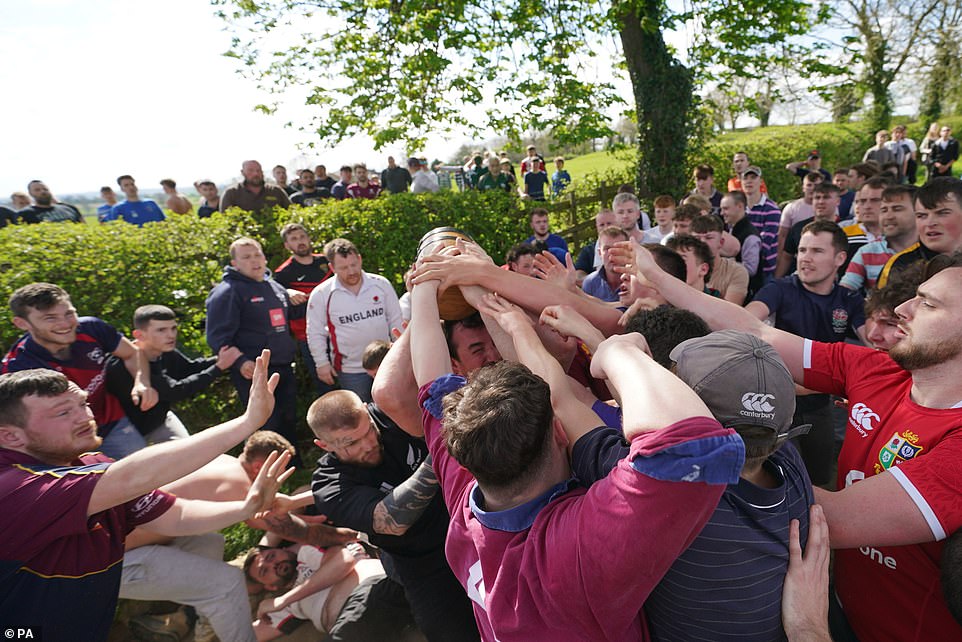 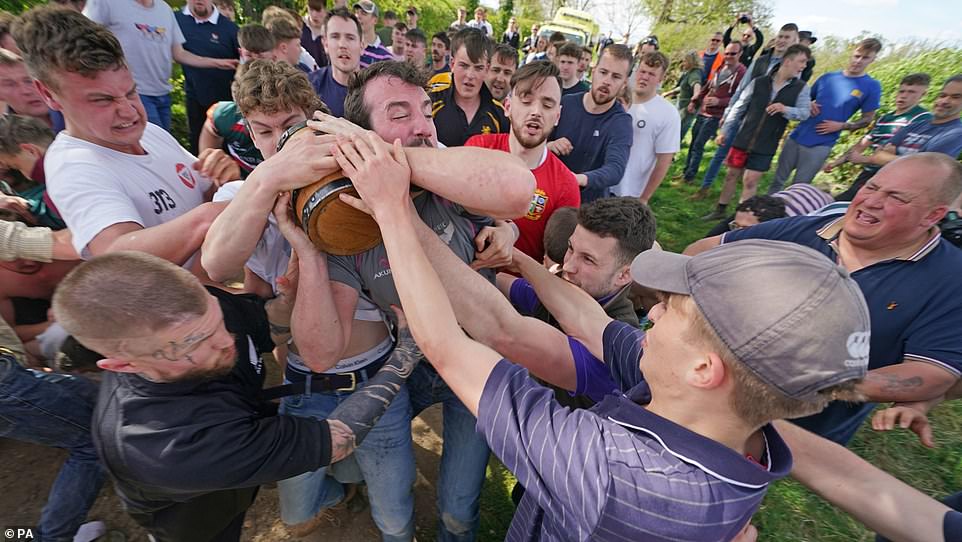 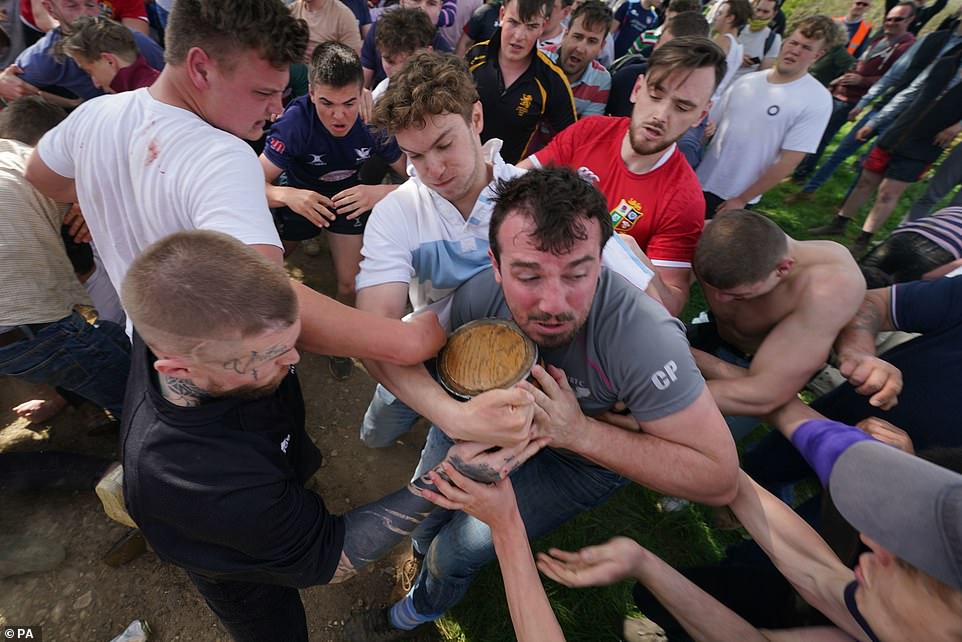 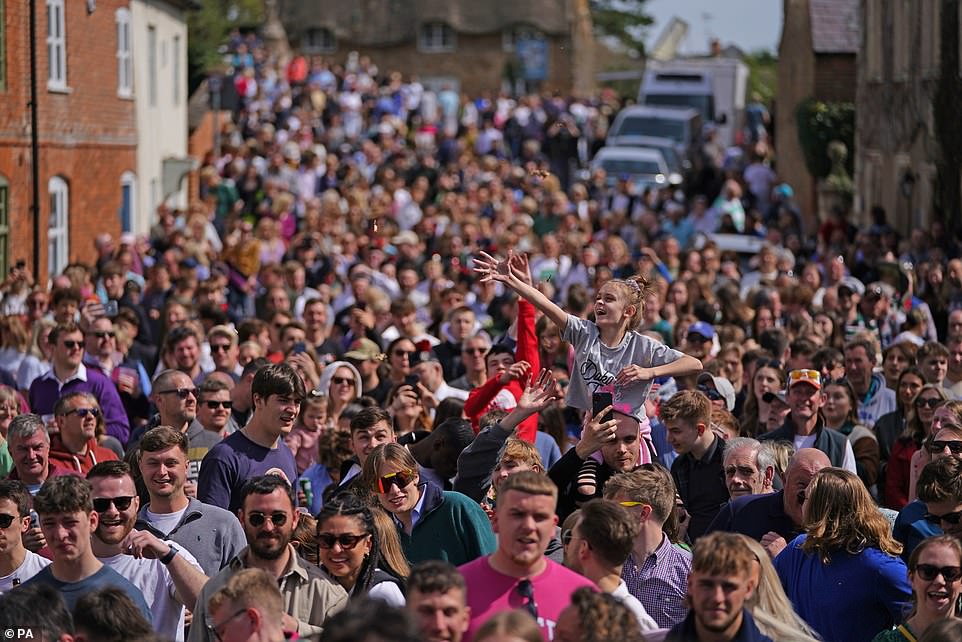 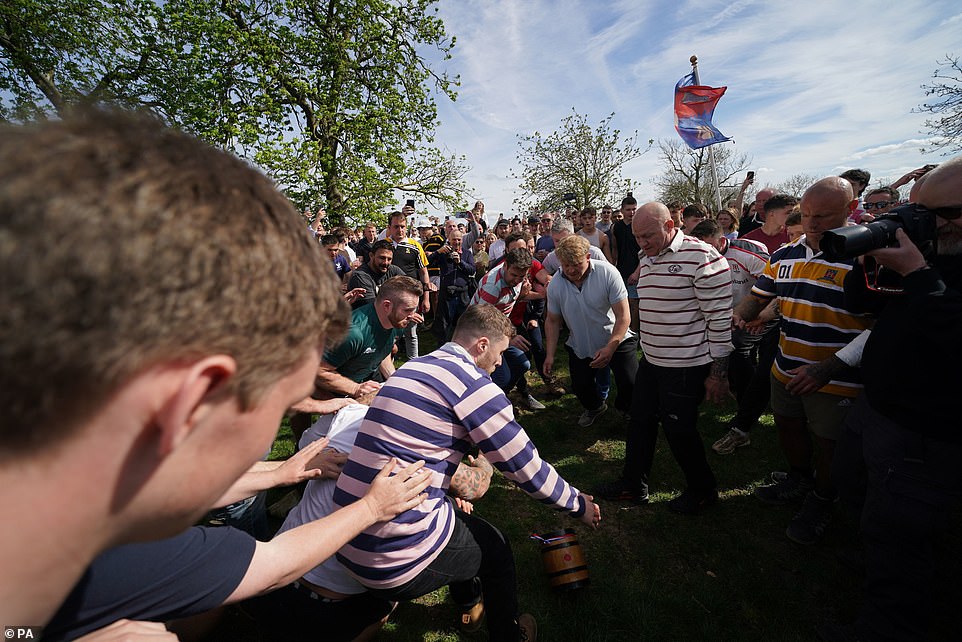 A barrel is thrown in the air three times to signal the beginning of the game, before villagers dive to get their hands on it 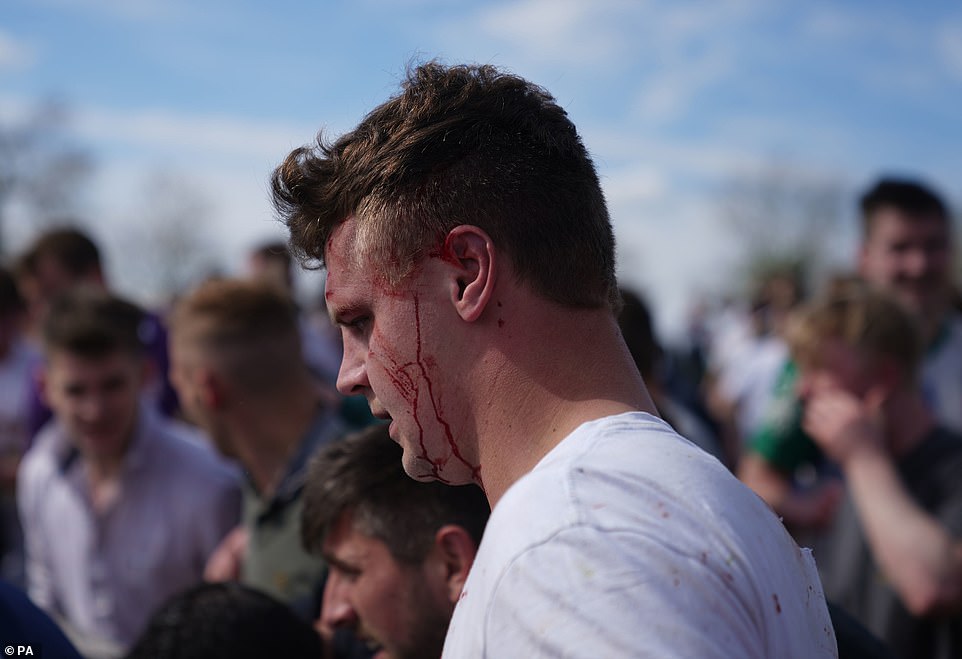 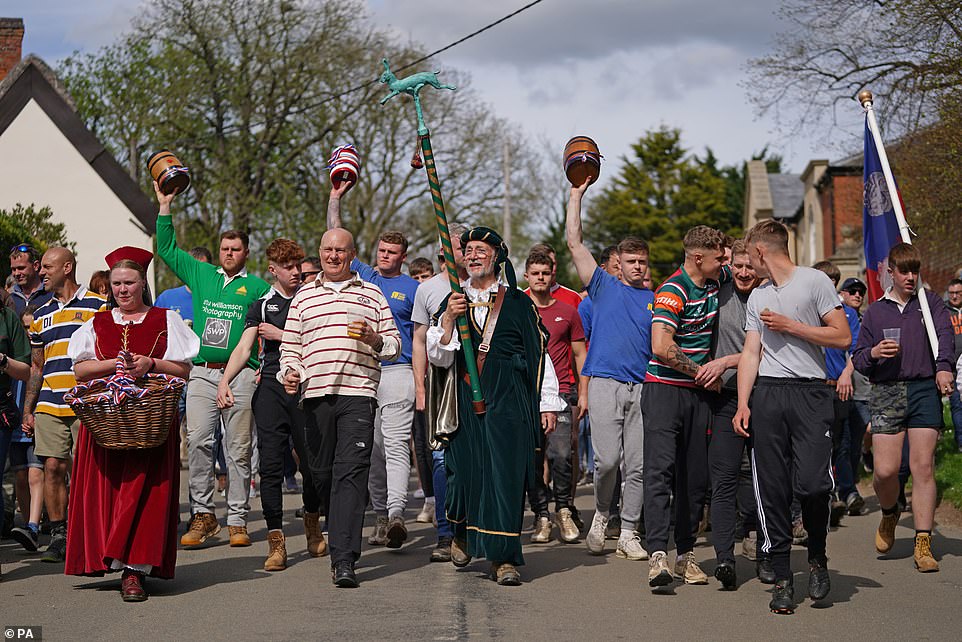 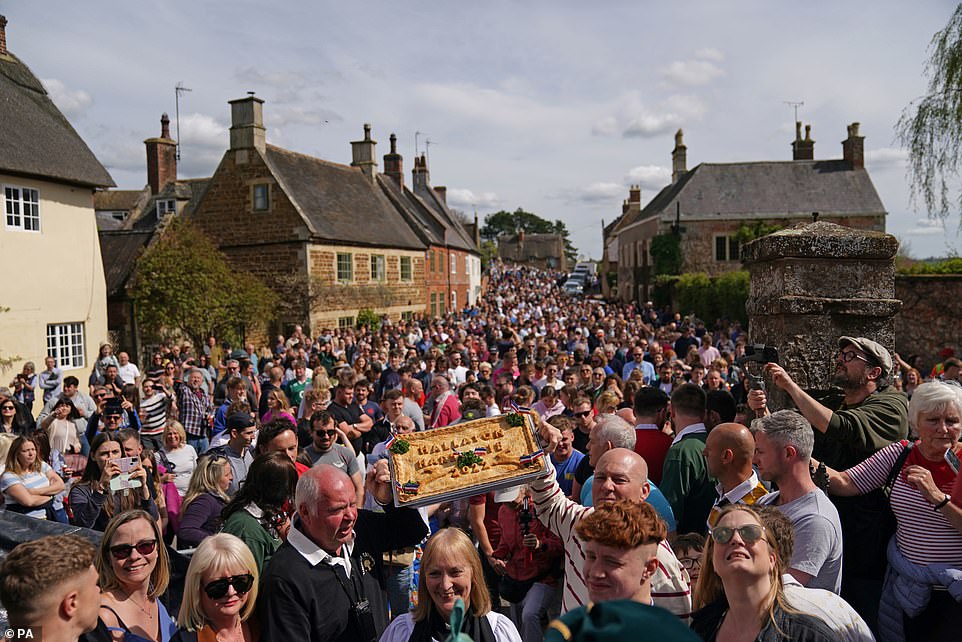 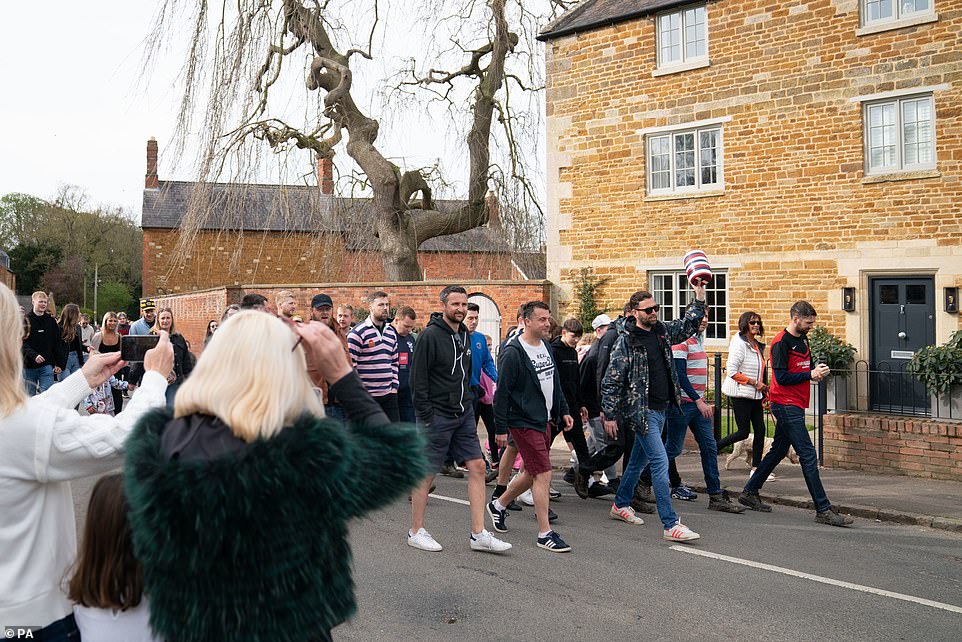 One of the ‘bottles’, an old fashioned barrel, is carried by villagers from Medbourne to the neighbouring village of Hallaton before the game 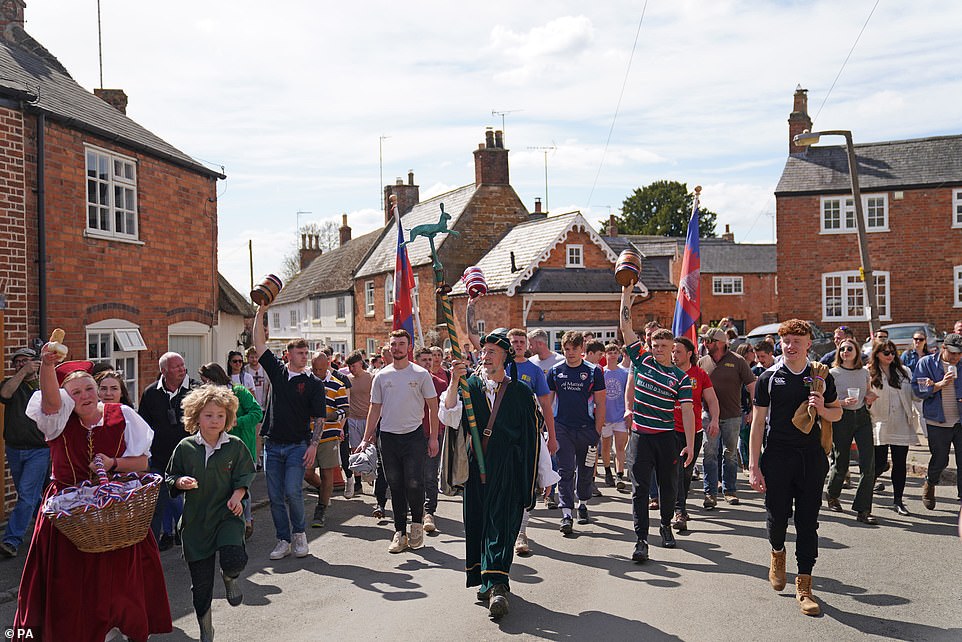 Three ‘bottles’, old fashioned barrels, are carried by villagers before the game kicked off this afternoon 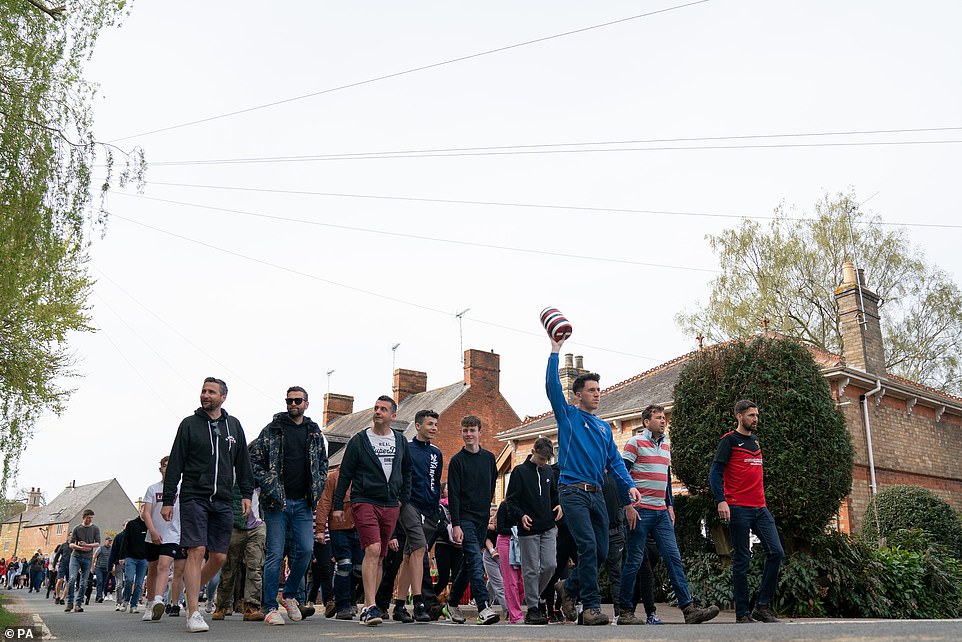 The pie is blessed by a Hallaton vicar, before being cut apart and thrown towards onlooking crowds to scramble over the food.

In the afternoon, the bottle-kicking gets underway with no rules aside from no ‘eye-gouging, strangling or use of weapons’, while organisers keenly insist they cannot accept any liability for injury.

Each barrel is thrown in the air three times to signal the beginning of the game, before residents of each village attempt to get the barrels over their neighbours’ stream – around a mile apart.

Upon the end of the game, which often lasts beyond an hour, residents retire to local pubs. 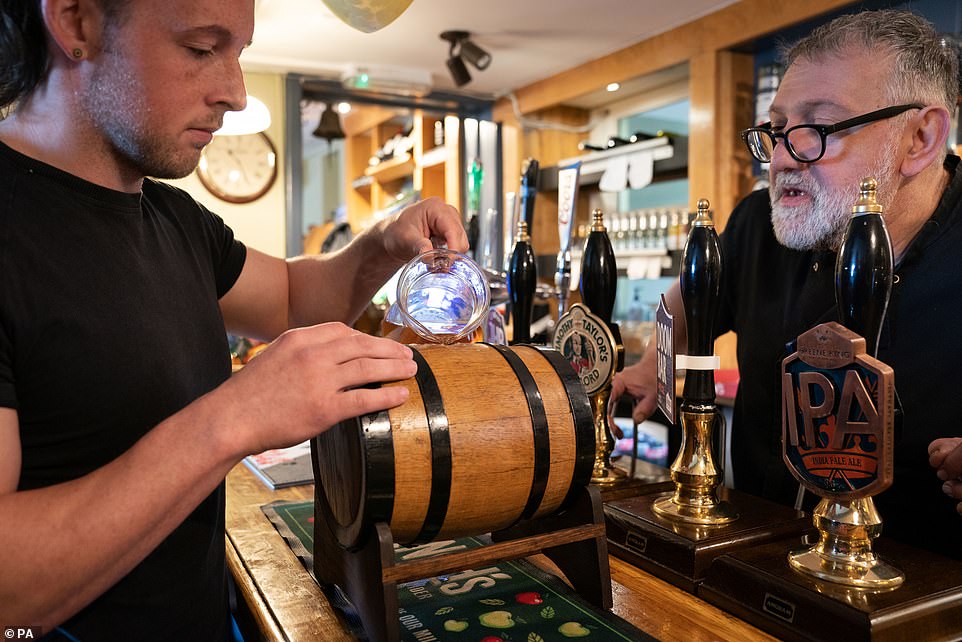 One of the ‘bottles’, an old fashioned barrel, is filled with ale at the Fox Inn in Hallaton, Leicestershire before the annual game 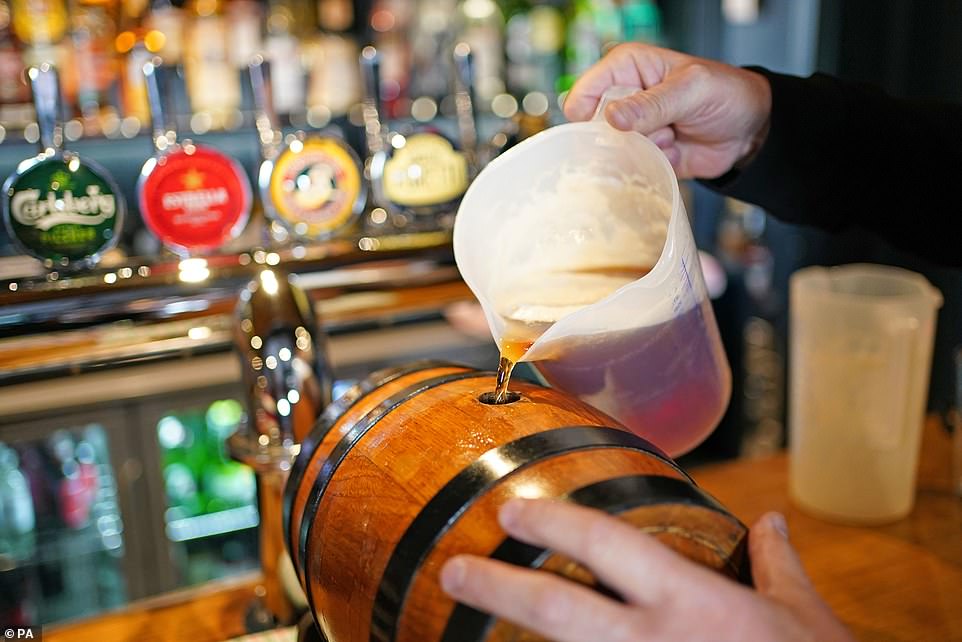 One of the bottle is filled with beer, which is later consumed by victorious villagers standing by the Hallaton’s Butterworth monument 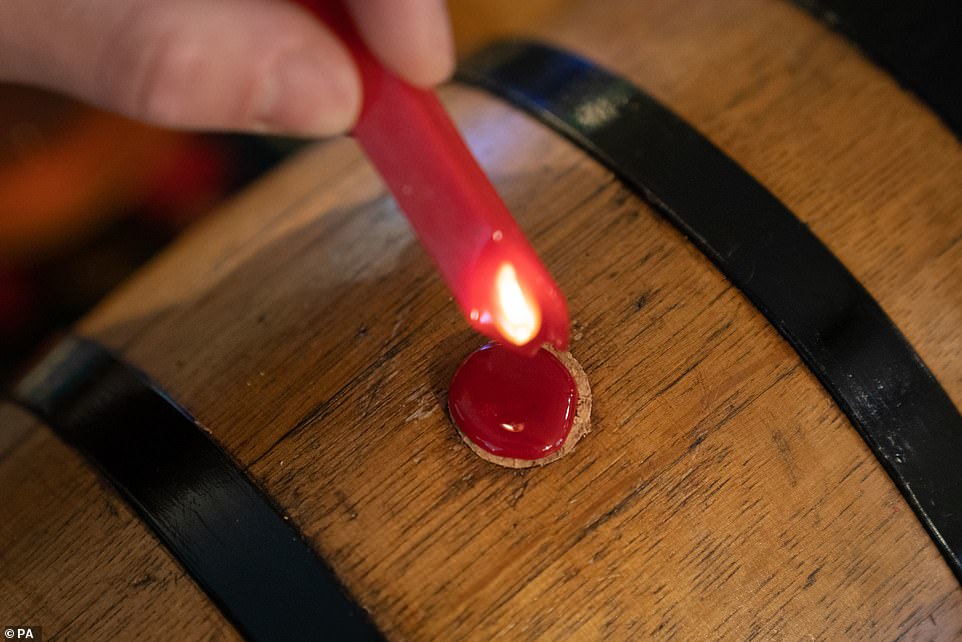 One of the ‘bottles’, an old fashioned barrel, is sealed with a wax stamp depicting a hare before being taken away to be used in the game 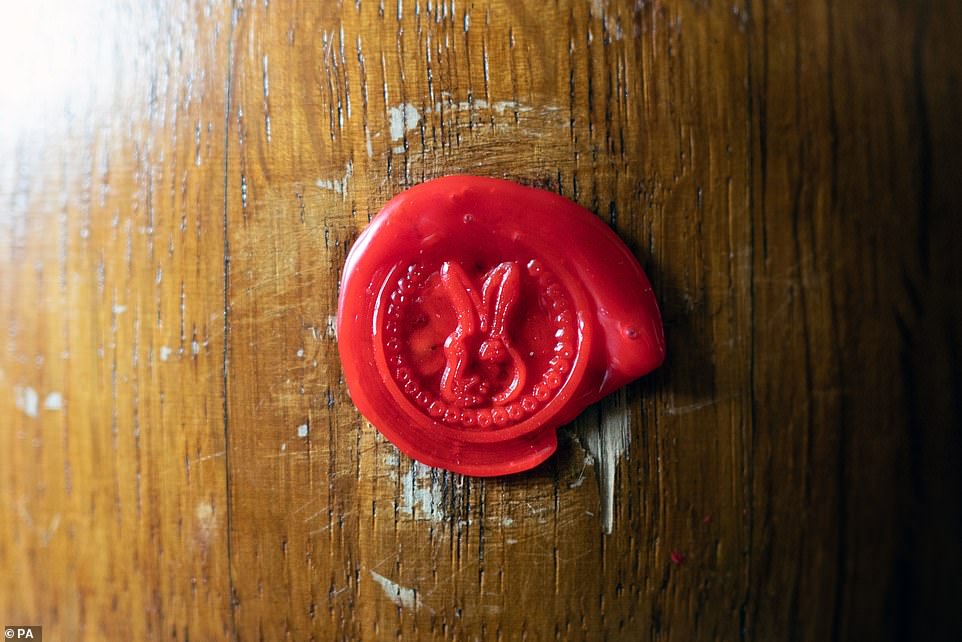 The wax stamp depicting a hare, which is later used during the feisty game between Hallaton and the neighbouring village of Medbourne

Participants are advised to take ‘extreme caution’, but pictures on Monday showed bloodied villagers as many took to the floor to get their hands on the prestigious barrels.

The task of moving the barrels at all became increasingly difficult as scrums broke out between the residents.

Following the game, both participants and spectators return to the Buttercross, a monument in Hallaton, where individual villagers receive recognition for strong effort before an opened bottle is passed around for everyone to drink.