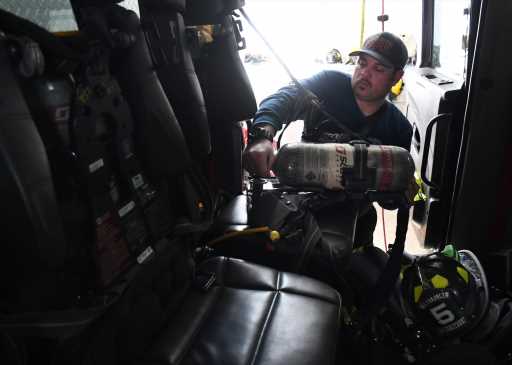 After sustaining a traumatic brain injury in a motorcycle accident five years ago, it seemed as if Jimi King’s dream of becoming a full-time firefighter vanished in an instant.

Doctors at St. Anthony’s Hospital, who had at first given him just a 1% chance of surviving the crash, were slightly more hopeful after King came out of a four-day coma. Even so, he’d need to endure three months of rehabilitation at Craig Hospital, teaching himself how to walk, talk and eat again before he could even think about setting long-term life goals.

But when King was discharged in December of 2017, he went after firefighting with the same determination that made him a star pitcher at Green Mountain High School, described during his senior year by The Denver Post as a “hard-throwing lefty.” He returned to volunteer firefighting for the Timberline Fire Protection District, where he had begun a year prior to the accident, and achieved his ultimate dream last May when Timberline, which is based in Blackhawk and serves Gilpin and parts of Boulder counties, hired him full time.

“I felt like the first few years after the accident were just tests of all different varieties, from physical therapy tests to reading tests to fire tests to EMT tests to driving tests,” said King, 31. “It just felt like life was tests. It was very, very hard. Not just hard, but things that would break some people.”

He was undeterred, though, because of “an internal desire to be better and have things completed, make family and friends proud.” In fact, he also got through EMT school, something he had begun to pursue a few days before the accident.

“That, in and of itself, was pretty incredible considering the extent of the accident,” said Timberline chief Paul Ondr. “I was at the hospital shortly after his accident. To see him today is absolutely unbelievable. That story should be a huge motivation for lots of people, especially people who went through what he went through.”

King’s drive to become a fulltime firefighter began when he was a scholarship pitcher for Northeastern Junior College in Sterling. He went through the fire science program there and then got a job operating heavy equipment for a construction company. Later he moved to Blackhawk and began volunteering with Timberline FPD, hoping for a full-time position to open up.

Then came the accident, on Sept. 3, 2017. King hit a median, upended the motorcycle and hit his head. He wasn’t wearing a helmet, something he now sternly admonishes in others.

“They didn’t know if he would walk or talk or be in a wheelchair forever,” said his mother, Beckie DiMauro. “As he was getting better, learning how to walk and talk, and it looked like he was going to walk and go home without the wheelchair, he really wanted to pursue his firefighting and his EMT.

“We all felt successful that he lived, that he was able to pass the fire academy and be a volunteer, not knowing if he would ever achieve paid status. He achieved what they didn’t think he would achieve. Extremely proud of the hard work he put in, in Craig and since Craig,” she added.

His time at Craig was filled with long, grueling days. And he had no memory of the accident.

“It was like being in school again,” King said. “I had to wake up and it was a full day of classes that were exhausting, mentally and physically.”

In a show of support, Ondr never took King’s name off the department’s volunteer roster.

“Obviously, for several years he was not participating, but when he was ready, he started coming to trainings and classes and reengaging to whatever level his doctors and the district were comfortable with,” Ondr said. “Once he was fully cleared, we started letting him run calls. He was just super engaged. I think it was a really important thing for him to get back into the fire department.”

King says there are few lingering effects from his accident, except for minimal memory loss and a weird aversion to having animal or human hair on his clothes. Also, music speaks to him in ways it didn’t before.

“Music means so much to me now,” he said. “I don’t know how to explain how much it means.”

Despite the brain injury, Ondr said no concessions were made to give King the full-time job he longed to earn.

“That was certainly a topic of conversation during the hiring and interview process,” Ondr said. “Would we need to (make concessions)? Was this a good idea? Those who were on the hiring process felt that he absolutely could do the job, could excel at the job. We’re totally comfortable with him, and have been since we offered him the job.”

On fires, King does whatever the call requires, including running the pumps or operating hoses. Some calls require four-mile hikes in mountainous terrain. Sometimes he sees things that take a toll emotionally.

King said he “absolutely” is living his dream now. The appeal of firefighting is “being in critical situations, being in situations most other people don’t want to be in, wanting to help people on what very well could be the worst day of their lives.

“They took a chance on me, and I’m trying to be the best I can for the community of Gilpin County,” King said. “It’s been a journey for sure.”

King’s mother still worries, but she also sees the potential her son’s story has to inspire others.

“It’s an inspiration of hope, that when you think there’s nothing left, you can climb out of that hole,” said DiMauro, who slept in the waiting room at St. Anthony’s the first two weeks of his stay.

“I know it’s not going to be easy, Every day I’m hoping he doesn’t hit his head. It could happen, but he wouldn’t be happy doing anything else.”