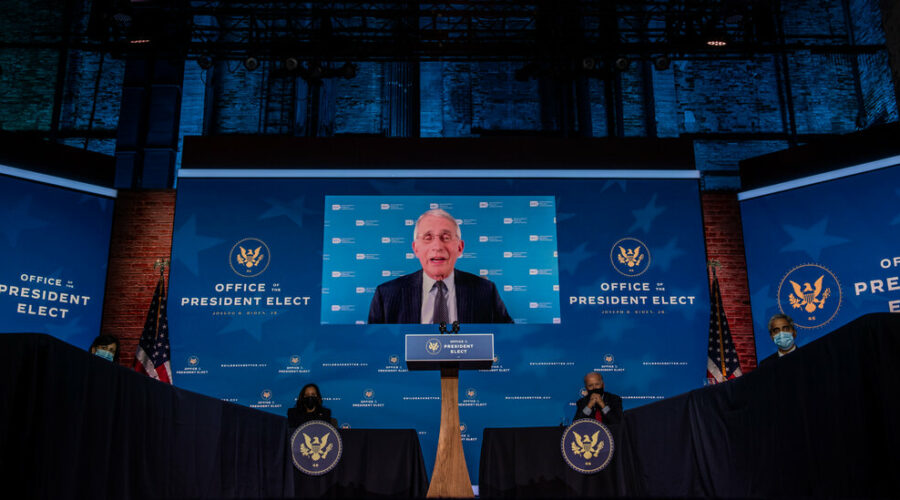 A day after President Biden reinstated American ties with the World Health Organization, Dr. Anthony S. Fauci told the organization that United States was committed to working closely with other nations to implement a more effective global response to the pandemic.

“Given that a considerable amount of effort will be required by all of us,” Dr. Fauci, the nation’s leading infectious disease expert, said via video link during a meeting of the group’s executive board, “the United States stands ready to work in partnership and solidarity to support the international Covid-19 response, mitigate its impact on the world, strengthen our institutions, advance epidemic preparedness for the future, and improve the health and well-being of all people throughout the world.”

Dr. Fauci said the United States would re-engage at all levels with the W.H.O. and intended to join Covax, a program set up by the agency to distribute vaccines to poorer nations.

His comments, which he said came exactly one year after the United States recorded its first Covid-19 case, underscored the alacrity with which the new administration is reversing both the substance and tone of the Trump administration’s approach.

“This is a good day for the W.H.O. and a good day for global health,” the agency’s leader, Dr. Tedros Adhanom Ghebreyesus, said, thanking President Biden for honoring his pledge to resume W.H.O. membership and Dr. Fauci for his personal support to the body over many years as well as his leadership in America’s response to the pandemic.

On Thursday, Mr. Biden put forward a 21-page national strategy that includes aggressive use of executive authority to protect workers, advance racial equity and ramp up the manufacturing of test kits, vaccines and supplies. The “National Strategy for the Covid-19 Response and Pandemic Preparedness” outlines the kind of muscular and highly coordinated federal response that Democrats have long demanded and that President Donald Trump rejected.

Since virtually the moment Mr. Biden was sworn into office, he announced a series of actions to try to blunt the pandemic, including restoring the National Security Council’s Directorate for Global Health Security and Biodefense, a group disbanded under Mr. Trump in 2018.

He is requiring social distancing and the wearing of masks by federal employees, contractors and others on federal property, and is starting a “100 days masking challenge” urging all Americans to wear masks and state and local officials to implement public measures to prevent the spread of the coronavirus.

His moves come in stark contrast to the response of President Trump, who announced the United States would pull out of the W.H.O. in May last year, accusing the organization of kowtowing to China. Mr. Trump had sought to blame China for not doing enough to stop the spread of the disease, and he accused Beijing of hiding the true scope of infections from the W.H.O., targeting the agency in the process.

On Thursday, addressing “my dear friend” Dr. Tedros, Dr. Fauci thanked the W.H.O. for its leadership of the global response to the pandemic. “Under trying circumstances,” he said, “this organization has rallied the scientific and research and development community to accelerate vaccines, therapies and diagnostics; conducted regular, streamed press briefings that authoritatively track global developments; provided millions of vital supplies from lab reagents to protective gear to health care workers in dozens of countries; and relentlessly worked with nations in their fight against Covid-19.”

The United States, he said, would fulfill its financial obligations to the W.H.O., halt the previous administration’s moves to draw down American staff seconded to it and saw technical collaboration at all levels as a fundamental part of its relationship with the agency.

“We will work with partners around the world to build a system that leaves us better prepared for this pandemic and for the next one,” he said.