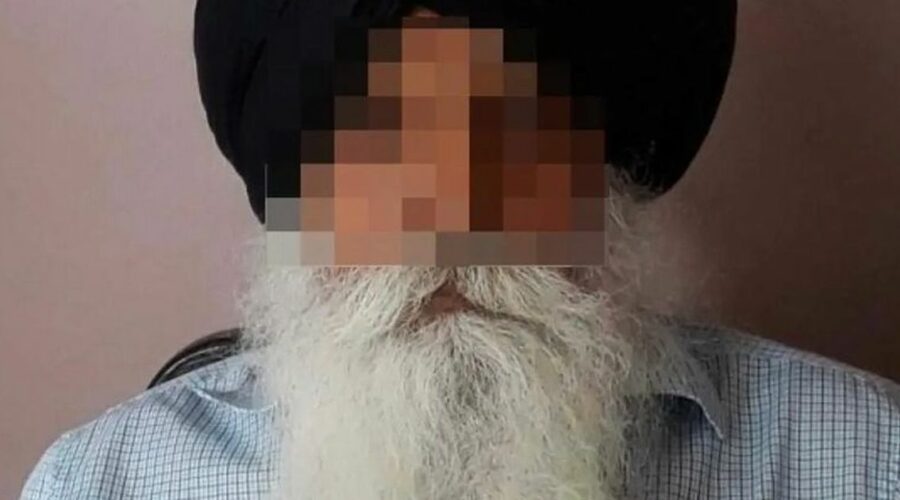 An elderly Sikh man had his hair and beard shaved without consent while unable to speak during a hospital visit, his family said.

Mr Singh, 71, was not named or fully pictured by his family for safety reasons, MyLondon reported.

They believe care staff then covered the shaved spot with a face mask in Zoom calls with Mr Singh – and had no medical reason to shave the hair.

In Sikhism, a beard signifies a believer's commitment to the religion, according to holy texts.

Mr Singh's family became suspicious last week when his daughter noticed a strangely positioned face mask was covering part of his beard in a Zoom call.

In a follow-up call the next day, nurses would only show his eyes via video link.

They complained to the ward manager.

The following day Mr Singh was shown in full, with his family horrified to see their father’s moustache and beard had been trimmed by staff.

They offered no clinical reasoning for cutting his facial hair.

Daughter Manpreet told MyLondon: "I broke down and started crying because I’ve never seen him like that, he always had a beard when I grew up.

“The way they covered up their mistake made it even worse. All we wanted as a family was a written apology but they refused.

"The staff were really rude and now they have stopped us from having any video calls with him."

“We are unhappy with the NHS and we want to take it further. I would encourage anyone else that this has happened to, to do the same. This is not right.”

The Sikh Federation (UK) has written to Hillingdon Hospital NHS Foundation Trust, with the family warning it may sue.

Federation chair Bhai Amrik Singh said: “It is impossible to describe in words the impact on a Sikh of his hair being removed without consent and with no clinical reasoning.

“This is a gross violation of the patients’ human rights and his right to practice his faith for which heads must roll.

“We can only imagine the trauma of this outrageous act on the mental well-being of the 71-year old stroke victim who has already been suffering for over 6 weeks.

“His family are deeply upset by the actions of staff at Hillingdon Hospital who firstly completely disrespected their father’s faith, followed by an attempted cover up that makes the situation even worse.

For more stories from the Daily Star, make sure you sign up to one of our newsletters here

A spokesperson for the Hillingdon Hospitals NHS Foundation Trust said: "We would like to apologise to the family for any distress we may have caused.

"This was an honest mistake made during our care for this patient and we have carried out an investigation into the incident, to learn from it and help ensure it does not happen again.

"We are in ongoing contact with the family and our Chief Executive, Patricia Wright, has also reached out to the Sikh Federation to discuss any broader concerns they may have.”