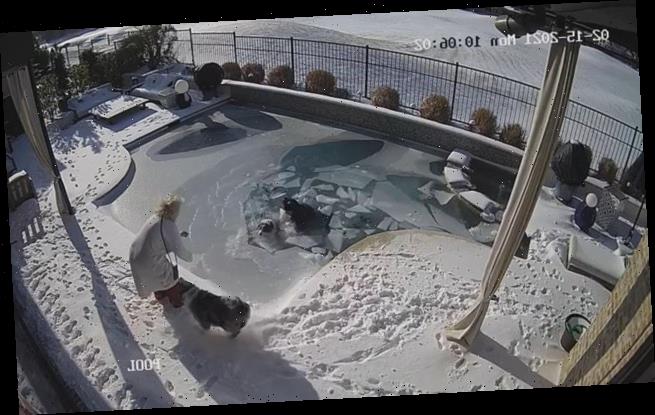 This is the terrifying moment a dog in Texas plunges into a freezing swimming pool after arctic conditions hit southern US states.

The dog’s owner, Dan Holmes of Southlake, Texas, was forced to venture onto the ice to rescue his pet, Christi, an Australian Shepherd dog.

According to the footage which was shot on Monday, Christi walked onto the frozen surface of his backyard pool which gave way, plunging the dog into the frigid water. 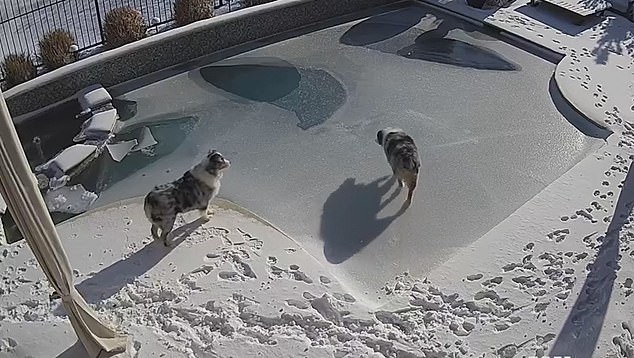 This is the moment Christi the Australian Shepherd dog made its way onto the frozen surface of a swimming pool in Southlake, Texas 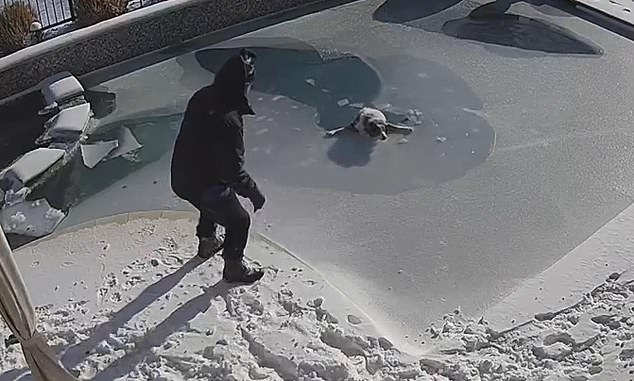 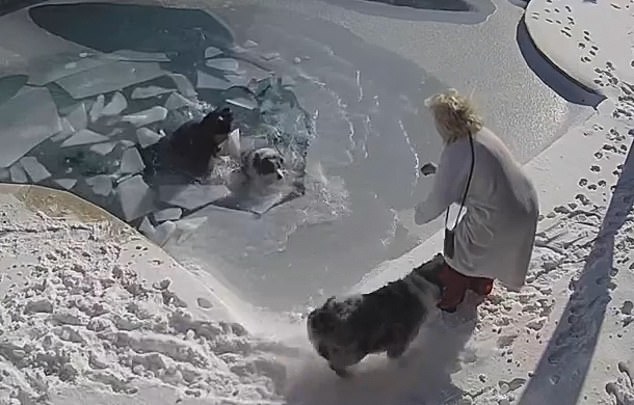 Spotting his dog in distress, Mr Holmes got down onto his hands and knees to spread the pressure and made his way onto the ice.

Moments later, the ice gave way, plunging him into the cold water.

He told Fox News: ‘I was cleaning snow away from the windows when my wife starts screaming all of a sudden and I turned around and saw Christi hanging onto the ice,’ Holmes said..

‘I was petrified. I didn’t really know what to do. I went to the side and she was at the middle, and I couldn’t get to her, so I put my hand down and fell in and rolled over and grabbed her and pulled her out as fast as I could.

‘Warning, if you have pets be careful. Watch this video, thank goodness I was out near the pool.

Millions of Texans have been left without heat due to energy blackouts in the state triggered by a cold spell in which both air and water temperatures have dropped well below typical levels.

About 7 million people in Texas – a quarter of the nation’s second-most populous state – were told to boil their water or stop using it entirely as homeowners, hospitals, and businesses grappled with broken water mains and burst pipes, many in areas unaccustomed to dealing with sustained frigid temperatures.

Winter storms during the past week in the Midwest, Texas and the South forced water service providers to scramble to manage flows as sub-freezing temperatures presented serious problems.

The Texas city of Kyle, south of Austin, asked residents to suspend water usage until further notice because of a shortage.

‘Water should only be used to sustain life at this point,’ the city of 45,000 said in an advisory. We are close to running out of water supply in Kyle.’

In Austin, residents were told to boil their water after the city’s largest treatment plant lost power. Meanwhile, the city’s fire department said it has received hundreds of broken water pipe calls since Monday. On Tuesday alone, the department fielded 685 calls about busted pipes.

In Houston, also, residents were told to boil their water – if they had power to do so – because of a major drop in water pressure linked to the weather. Austin Water told residents in the southwest section of the city to boil water before using it for drinking or cooking.

Leaders in Austin and the Houston area asked residents to stop dripping water from their faucets because of a drop in water pressure.

‘We are happy to do it,’ Ponder said. ‘These are strange times.’