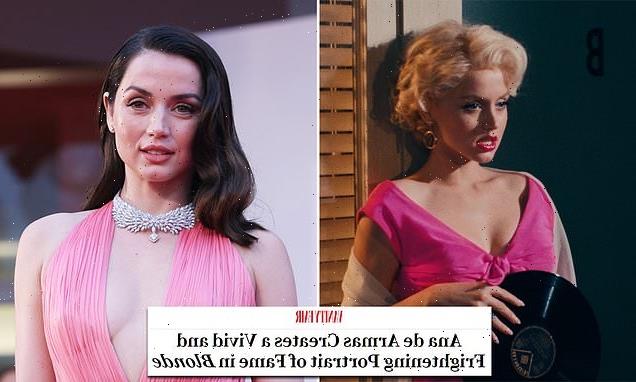 Blonde – one of the most anticipated films on the festival’s slate – is based on a work of biographical fiction by Joyce Carol Oates and charts the star’s troubled childhood as Norma Jeane through to global stardom as Marilyn Monroe.

The Telegraph’s critic Robbie Collin heaped praise on the fictionalized take on Marilyn’s life as he awarded the Netflix film a four-star review.

Addressing criticism that Spanish star Ana would be using her natural accent in the role, he praised the actress for capturing Marilyn with ‘extraordinary psychological precision and real depth of feeling’.

‘Not only does she look the part, she understands that the part is a dismantling of the look,’ he said.

‘Blonde is severe and serious-minded almost to a fault: you rather wonder how many viewers at home will soldier on to the end when it lands on Netflix after a limited theatrical release.

‘In the cinema, though, it swallows you up like an uneasy dream, at once all too familiar and pricklingly unreal.’ 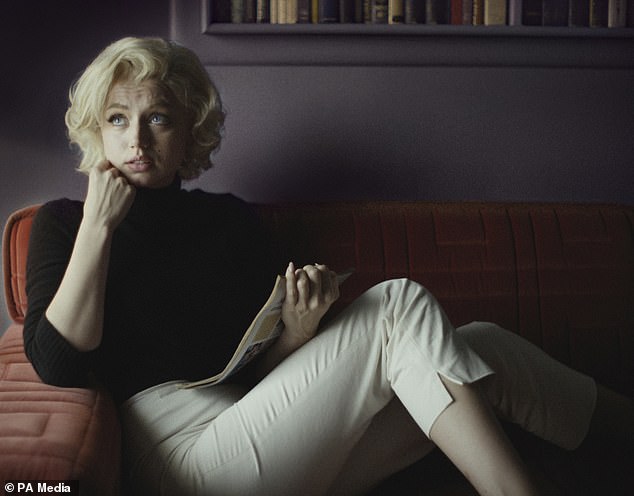 The Guardian’s Leslie Felperin gave a more conservative three-star review as it criticized the film for not giving Marilyn ‘much agency in her story’.

‘The psychological framework is very old-school Hollywood Freudian, which doesn’t give Monroe herself much agency in her story,’ the review said.

However, the film critic could not fault Ana’s performance, penning: ‘De Armas’s intense and ultimately persuasive performance goes a long way towards bringing the goddess down to earth, but will that be enough?’

The Netflix film, produced by Brad Pitt’s company Plan B, will be available on the streaming service on September 23 and has received rave reviews from critics, with Ana’s performance being described as ‘extraordinary’ by gushing critics.

Directed by Andrew Dominik, it stars de Armas, who was born in Cuba and worked with a dialect coach for a year to prepare for the role. 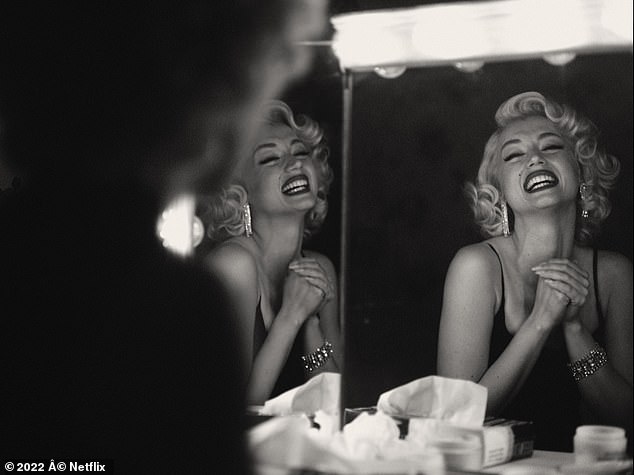 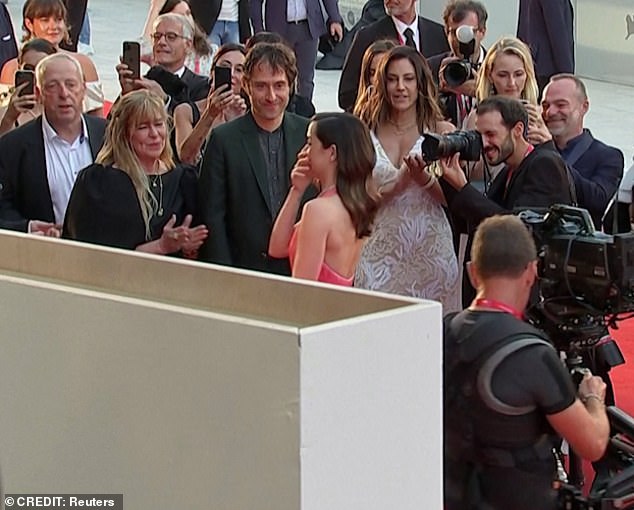 The actress, 34, who plays Marilyn Monroe in the movie, was brought to tears as Blonde received the longest standing ovation at this year’s Venice Film Festival at 14 minutes duration 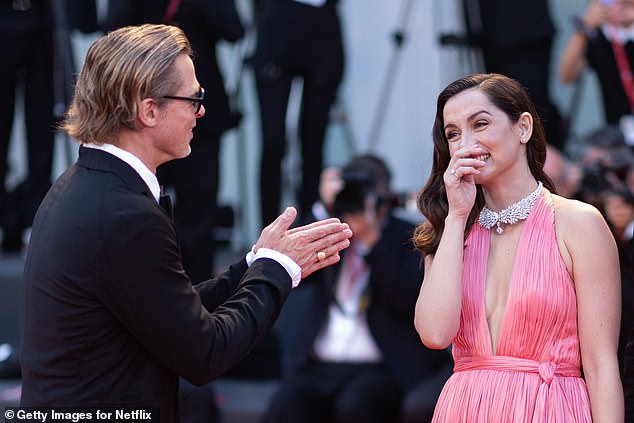 Blonde, produced by Brad Pitt, has received rave reviews from critics, with Ana’s performance being described as ‘extraordinary’ by gushing reviewers

Other publications were equally effusive in their praise.

Deadline described Ana as Dominik’s ‘muse’ as they addressed the ‘astonishing’ way Marilyn’s story was retold – through the lens of a fictionalized book, rather than autobiographical material.

Critic Damon Wise went on to gush over the technological successes of the movie but said it was Ana’s performance that carried the film.

‘Andrew Dominik’s Venice Film Festival competition entry ‘Blonde’ takes a blowtorch to the entire concept of the Hollywood biopic and arrives at something almost without precedent,’ Wise said.

He wrote: ‘That the film works at all is down to the extraordinary performance at the heart of it: Ana de Armas carries the film squarely on her shoulders, depicting Monroe over a period of some 16 years, and the performance — actually more of an interpretation, helped by the actress’s liminal resemblance — is all-in, ferociously emotional but complex in its nuances as it explores the child-like sex symbol’s many paradoxes.’

‘For the brave and the curious, Blonde should prove fascinating, an engrossing slow-motion car wreck of a movie that puts you squarely in the driver’s seat of the oncoming vehicle,’ the review concluded.

Elsewhere, Vulture’s critic Bilge Ebiri noted that although Marilyn doesn’t have ‘agency’ in the story, the movie is never ‘boring’ due to its incredible cinematography. 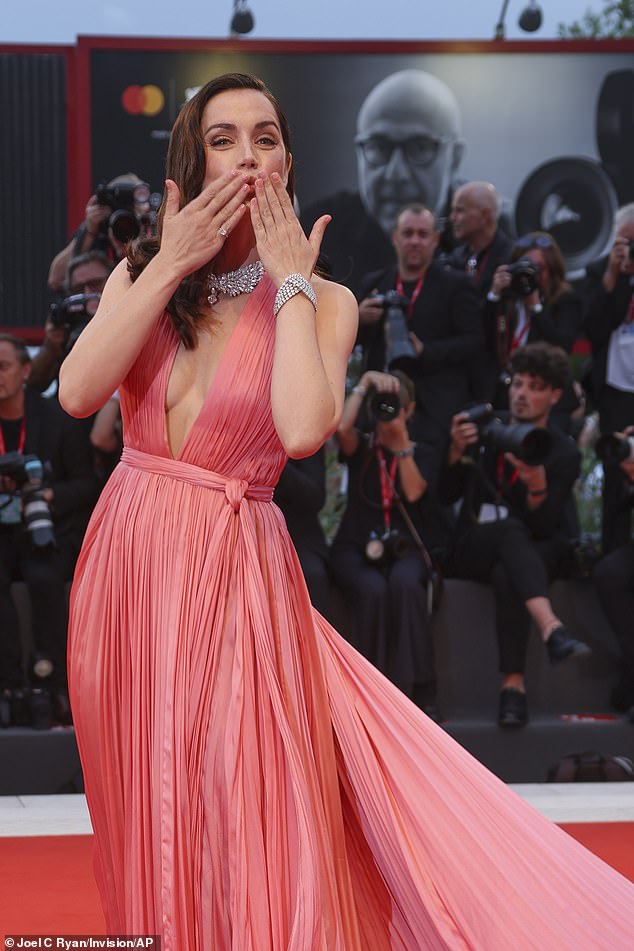 ‘Blonde is beautiful, mesmerizing, and, at times, deeply moving. But it’s also alienating — again, by design — constantly turning the camera on the viewer, sometimes with Marilyn directly addressing it,’ they said.

Variety’s critic Owen Gleiberman said the film was ‘built around a performance, by Ana de Armas, of breathtaking shimmer and imagination and candor and heartbreak. It’s a luscious piece of acting with a raw scream tucked inside.

‘No actress alive is going to look just like Monroe (de Armas’ eyes are a dead ringer; her smile is a tad less ripe and more knowing), but with Marilyn the voice is everything — that’s where her personality lives — and de Armas nails it to an uncanny degree,’ he added.

‘In ‘Blonde,’ she gives us nothing less than what we came for. She becomes Marilyn Monroe.’

Vanity Fair’s Richard Lawson wrote how the actress is ‘fiercely, almost scarily committed to the role, maintaining high and focused energy through every torrent of tears and screams and traumas’ and crafts a ‘vivid and frightening picture of the madness of fame.’

Lawson notes: ‘[After] a brutal, nearly-three-hour sit, Andrew Dominik’s bold and complex imagining of Marilyn Monroe’s life is a fascinating alternative to the traditional biopic.

Some critics disagreed with David Rooney of the Hollywood Reporter slamming the production.

‘This is a work of such wild excesses and questionable cruelty that it leaves you wondering how many more times and in how many more creative ways are we going to keep torturing, degrading and killing this abused woman,’ he stated.

‘As it lurches on well past the 2-hour mark, spiraling deeper into nightmare, Blonde becomes a lurid horror movie, at times overwhelmingly unpleasant.’

Needless to say the film has been met by an incredible response, with even Joyce Carol Oates – who wrote the 2000 biographical fiction novel Blonde – praising the movie adaptation.

‘I think he succeeded in showing the experience of Norma Jeane Baker from her perspective, rather than see it from the outside, the male gaze looking at a woman. He immersed himself in her perspective.’ 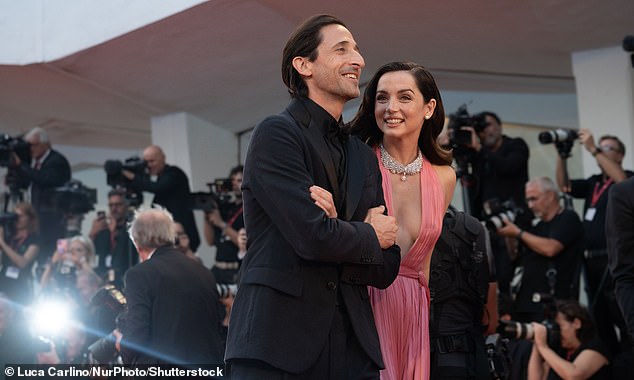 The author also praised Ana’s portrayal of the Hollywood icon, particularly as she spent several hours transforming her look to resemble Marilyn for the Netflix movie.

The author said: ‘Transforming into Marilyn always took (Baker) hours. Ana de Armas, the wonderful actress who plays her, I think it took her like four hours of makeup.

‘So when you see them on the screen, they don’t really exist. It’s like a fantastic image, but to make it a livelihood is to endure a good deal of anguish.’

Ana previously revealed that she wore a bald cap to conceal her brunette locks during filming and was moved to tears when she saw her character’s wigs for the first time.

She said: ‘(Marilyn) went through different shades of blonde from golden to really platinum, so for these wigs that are beautifully made, you can’t have anything dark underneath, so we had to make a bald cap every single day from my forehead to (around) my whole head.

‘I think I actually cried the first time I saw (the wigs) on. Probably because I was terrified. But I’m so proud.’

The Knives Out actress also described how she left her brain ‘fried’ by spending nine months training with a dialect coach to perfect Marilyn’s voice.

Ana said: ‘It was a big torture, so exhausting. My brain was fried.’ 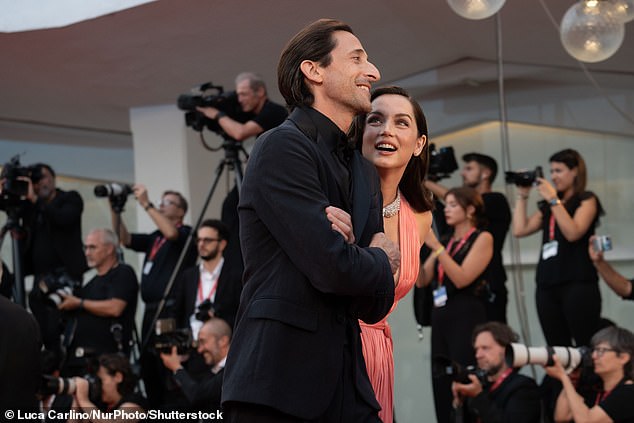 Ana, who only learned English in 2015, recently admitted that she ‘didn’t grow up knowing Marilyn or her movies’.

‘I am proud to have Andrew’s trust and the chance to pull it off. I feel like whether you’re a Cuban or an American actress, anyone should feel the pressure.’

‘I was interested in her feelings, her journey, her insecurities, and her voice, in the sense that she didn’t really have one.’

While Blonde is not fully-authorized by the Marilyn Monroe Estate, Ana’s performance has had plenty of early plaudits. 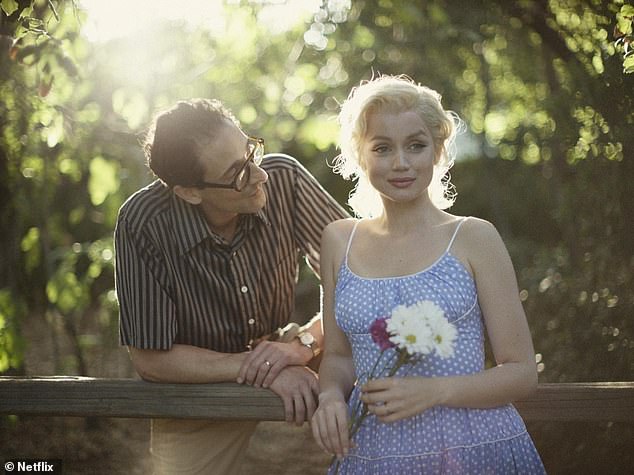 The rep for Monroe’s estate Marc Rosen told Variety in August: ‘Ana was a great casting choice as she captures Marilyn’s glamor, humanity, and vulnerability.’

‘She is phenomenal in it. That’s a tough dress to fill,’ the Plan B Entertainment co-founder told ET last month.

‘It was 10 years in the making. It wasn’t until we found Ana that we could get it across the finish line.’ 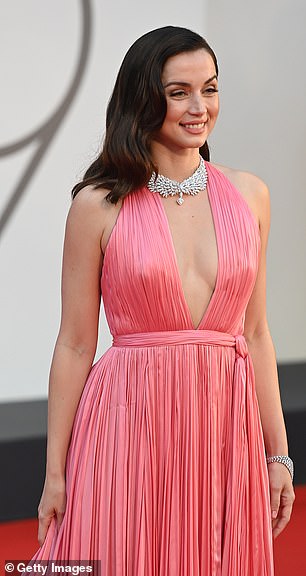 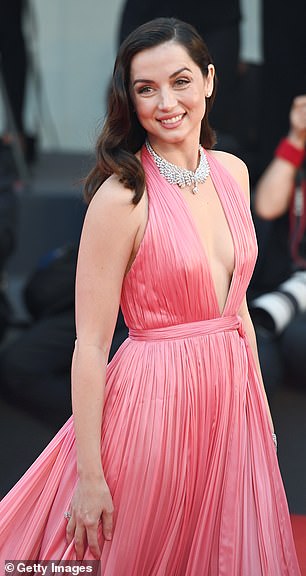 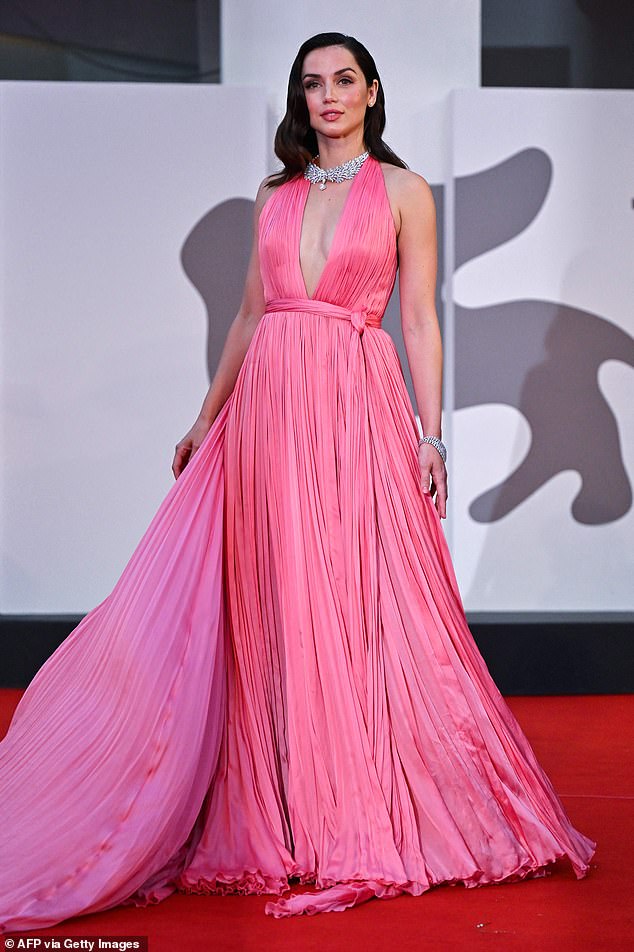 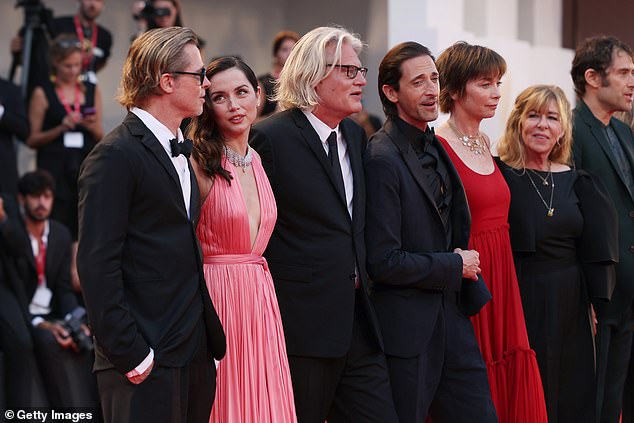