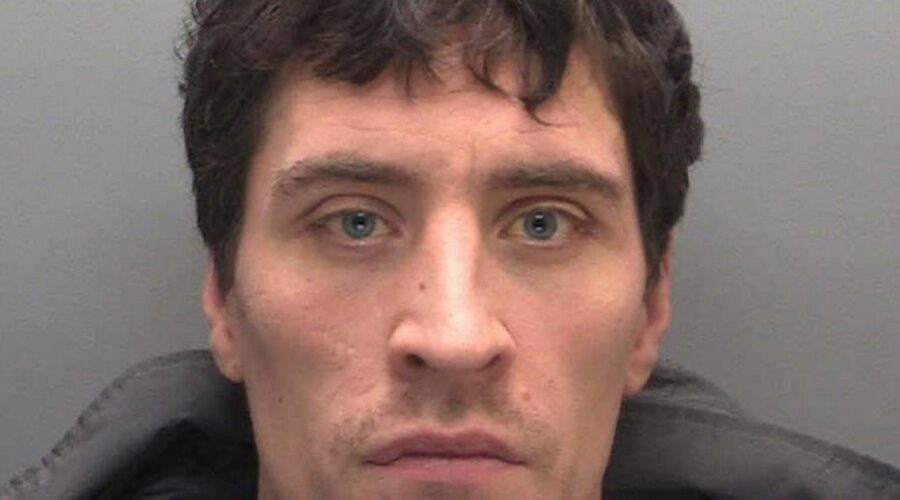 A "violent, cowardly bully" was jailed for breaking his girlfriend's eye socket and pouring paint over her.

Domestic abuser Damien Rich also broke into his ex-partner's house in the middle of the night while "off his head" on cocaine, the Liverpool Echo reports.

The Birkenhead attacker committed a series of violent assaults late last year, with his most violent a planned attempt to harm and humiliate his victim.

A woman's eye socket and cheekbone were broken after a "serious punch" to the face by Rich following a row.

The messages included threats such as: "I am gunna break ur face for u", "U think ur funny were did u go last nyt am gunna punch ur head in a fat mess" and "U fat mut I am gunna ruin ya slag u was in tha taxi ya slut Il be in soon am gunna knock you out".

Finally on December 29 Rich turned up at the woman's work in a taxi, bought buckets of paint and proceeded to throw it over her.

Mr Cockrell added: "This happened whilst a colleague looked on in horror."

Rich had already been given a restraining order on another violence victim months beforehand and had served time in July 2020 after violating the terms.

The victim of the paint attack said she already suffered from anxiety, depression and a personality disorder.

She told the court Rich's abuse led her to three suicide attempts and an increase in her medication.

"I feel like I'm being attacked by Damien Rich.

"I'm in a constant state of high alert."

Rich has 20 previous convictions for 28 offences, including wounding, attempted robbery and possessing an offensive weapon and assaulting emergency workers.

Ms Duke said: "It's not unusual for young men who have seen domestic violence from a young age to thereafter become the perpetrator themselves."

Judge Andrew Menary QC jailed Rich for three years and nine months, adding a permanent restraining order for one of his victims.

He said to Rich: "You plainly have a poor family background with a history of you yourself being the victim of abuse and violence, with a lack of real support.

"It may well be that has made you something of the person you are today, but your record of past offences of violence cannot be ignored."