Wellington: Prime Minister Jacinda Ardern has announced the trans-Tasman bubble with Australia will be suspended for two months.

The bubble will pause from 11.59pm on Friday night local time (9.59pm AEST) but there will be managed return flights over the next seven days to allow Kiwi citizens and residents to come home.

Those outside of Victoria and New South Wales will be able to get on these flights and not go through quarantine – but everyone will need a negative pre-departure test. 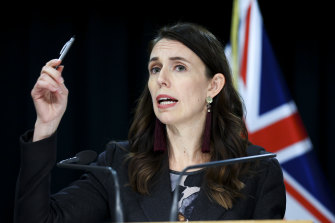 Those in New South Wales will need to go through hotel quarantine while those in Victoria will be able to self-isolate at home, with similar testing requirements to those in managed isolation.

“My strong message to every New Zealander in Australia right now who does not want to stay there long term is – come home,” Ardern said.

She said after those seven days of return flights Kiwis would have to obtain a managed isolation spot like everyone else and enough space could not be guaranteed.

The bubble, already shut for many states, was designed to allow New Zealanders and Australians to travel between the countries without staying in mandatory managed isolation hotels.

Both countries had essentially eliminated COVID-19 when the bubble was launched, but border leakages in Australia and subsequent outbreaks have seen parts of the bubble shut several times.

The large outbreak in New South Wales grew by 136 community cases on Friday, and a national emergency was declared.

Ardern made the announcement after a special virtual Cabinet meeting on Thursday, held while she was planning to be on holiday.