Alarmed coastguards rushed to the rescue after spotting a car that was submerged in the sea off the South Coast of England on Wednesday.

Coastguard officers were called into action when a silver hatchback was seen in the water in choppy sea condition off Shoebury Common Beach, Southend-on-Sea in Essex.

Fearing for people who may have been trapped in the vehicle, the car was found to be empty by the responding officers and was recovered yesterday.

The owner of the car, who was quickly located, explained that the vehicle had become stuck in the sand. 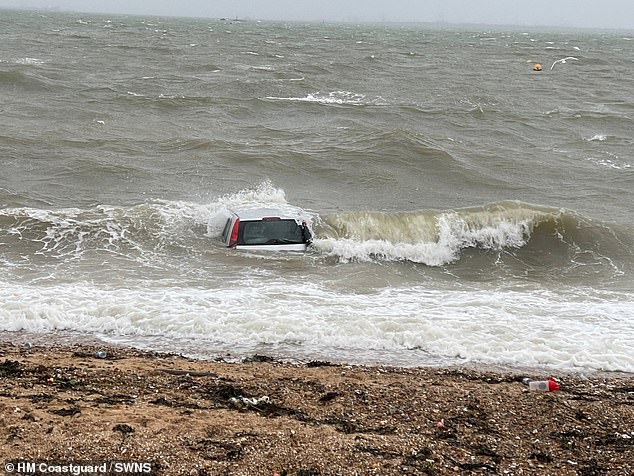 Fearing for people who may have been trapped in the vehicle, the car spotted submerged off a beach in Essex was found to be empty by the responding officers

They left the car without any reported injuries, according to the Maritime and Coastguard Agency.

The car, which was only just visible to onlookers, was surrounded by crashing waves. with only the roof and windows peeking out of the water.

A Maritime and Coastguard Agency spokesperson said: ‘Southend-on-Sea Coastguard Rescue Team was sent to investigate a report of a submerged vehicle just off Shoebury Beach on 28th December.

‘A team arrived to find the car empty and the owner was quickly located inshore and able to confirm the vehicle had become stuck in the sand with no reported injuries. The vehicle was recovered yesterday .

‘If you are in trouble at the coast, or you suspect someone else is, call 999 and ask for the Coastguard.’