China has responded forcefully to days of international condemnation, dismissing the joint statements of the G7 and NATO as attempts by the West to dictate international affairs.

Declaring that era had finished, China’s Foreign Ministry on Tuesday night appealed to countries outside the power blocs of the major democracies, arguing the United Nations was the only forum that maintained the international order. 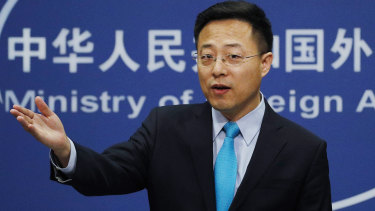 “Under the current situation, the international community need to strengthen solidarity and cooperation and practice true multilateralism more than ever,” said Foreign Ministry spokesman Zhao Lijian.

“The era of one country or a bloc of countries dictating world affairs is over.”

The G7 summit in Britain on Sunday condemned Beijing for human rights abuses and its use of “non-market policies and practices which undermine” the global economy, while NATO on Tuesday also declared China poses “systemic challenges” to international order.

“It reveals the malign intentions of the United States and a few other countries to create confrontation and widen differences and disputes,” said Zhao. “The US is ill and it’s bad. We’d like to advise the G7 to save its prescription for the US.”

France on Wednesday joined Britain, Japan and the United States in backing Australia in its ongoing diplomatic dispute with China after Beijing’s trade strikes on more than $20 billion worth of Australian exports.

Chinese state media has escalated its criticism of all four countries and the G7 since the weekend meetings. The Global Times published a cartoon that has gone viral on Chinese social media site Weibo by Chinese artist Bantonglaoatang lampooning the diplomatic partners drinking poison at the G7 last supper.

Australia is depicted as a Kangaroo reaching out for a wad of US dollars while being hooked up to an intravenous drip with a Chinese flag – symbolising its economic dependence on the superpower.

China Daily said China was the “world’s largest and most substantial democracy”.

“Perhaps the group of developed countries is under the illusion that the world is led by its diktats,” it said in its editorial. “For one, the elite group needs to emerge from its delusional slumber and accept the reality that all countries, rich or poor, big or small, are equal and the affairs of the globe should be guided by the UN Charter, and not decided by a small clique.”

China’s Foreign Ministry also accused NATO – a military alliance of 30 North Atlantic nations in Europe and North America launched at the beginning of the Cold War – of failing to keep the peace.

“It is up to its neck in debt morally and has brought wars and instability to the world for many times,” said Zhao. “The international community will not forget the 78 days of indiscriminate bombing of Yugoslavia by NATO without the approval of the UN.”

Zhao said China did not pose systemic challenges to anyone and claimed while NATO had urged its member states to increase their military spending to at least 2 per cent of GDP, China’s defence budget accounted for about 1.3 per cent of its GDP.

The G7 also targeted allegations of human rights abuse by Chinese authorities against the Muslim-Uighur minority in Xinjiang and the erosion of democracy in Hong Kong in its joint communique. For the first time, it also included a reference to the peace and stability of the Taiwan Strait, where China is pursuing unification with its democratic island neighbour Taiwan.

16/06/2021 World News Comments Off on China on G7: ‘The era of a bloc of countries dictating world affairs is over’
Markets