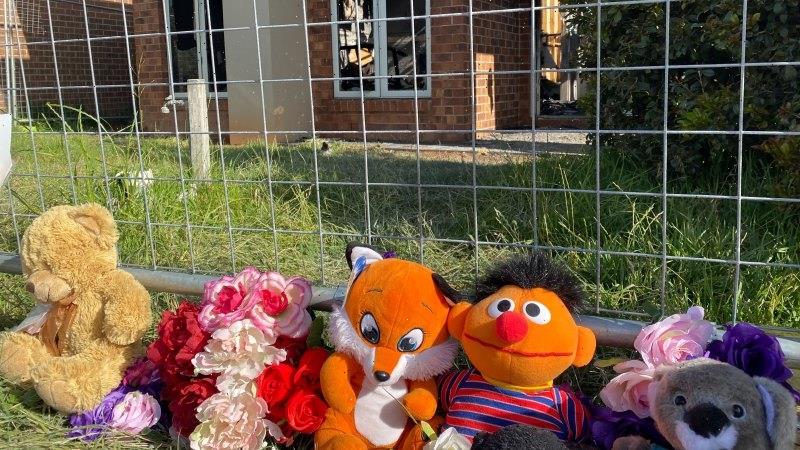 Emotional neighbours on Sunday recounted the moments father of five Nagmeldin Osman tried to save four of his children, aged from one to 10, after fire engulfed the Mantello Drive home in Werribee. 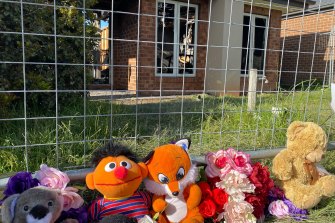 Tributes left outside a Werribee home where four children died on Sunday.Credit:David Estcourt

The children who perished in the fire were identified by family friends as: Hamid, 10, Esin, 6, Nadir, 3, and Elin, 1.

A fifth child – Ibrahim, 8 – was released from hospital on Monday while his father and mother, Khadiga Osman, remained at The Alfred hospital in a stable condition.

Smoke lingered in the air outside the home on Monday morning as neighbours and friends left soft toys and bouquet of flowers in front of the iron fencing now surrounding the property.

A few small notes sat next to the flowers. One spoke of a “beautiful soul, you’ll never be forgotten”, while another urged the children to “fly high little angels”. 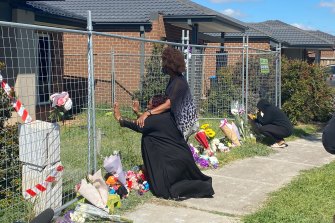 Kneeling in front of the burnt-out house, Derrimut childcare worker Marie Pisua sobbed for the four children she took care of and had seen just days before they tragically died on Sunday.

“I like them. They like me. They play with the toys,” she said. “They were very happy.”

Ms Pisua said she had looked after all five of the children, who had attended her childcare centre.

Her friend, Yvette, translated on her behalf as she grieved. “She just hopes they are in a good place,” Yvette said.

On Monday afternoon, family friend Sadam Ibrahim approached the house with a small pink flower box in his hand.

He said he had worked with the children’s father for three years and helped them move into the house that had been destroyed by fire.

Slumped against a white ute parked on a nature strip, he wiped away tears as he looked through the steel fencing into the blackened home.

“My heart goes out to them,” his wife Sarah echoed. “It’s so awful.”

Another woman, who did not wish to give her name, cried as she described how her son had previously played with some of the children, and that she knew the mother who was now recovering in The Alfred.

“They play together,” she said. She came to lay flowers on Monday because she was a mother, she said.

SES chaplains arrived in the area just after 2pm to doorknock and offer emotional support to neighbours and mourners.

Wyndham City Council mayor Peter Maynard told 3AW on Monday that the family had been offered emergency housing, as well as grief and trauma counselling.

Charred beams, insulation and seared furniture could be seen inside the house after the roof collapsed on Sunday, while CFA tape was still draped over the family letter box.

Investigators are still trying to figure out what caused the blaze.

Arun, who lives across the road from the family and had only recently moved to the street, witnessed the “unbelievable flames”, as the injured man pleaded for help to save his four trapped children.

“The father was trying to smash the door, smash the windows, everything,” Arun said on Sunday.

Neighbours Geeta and Robert Deagan assisted the distressed couple as they sought to save their children, trying to use a hose to suppress the flames and sheltering the woman in their home. 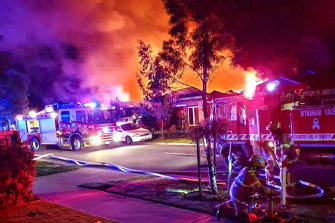 The blaze was so fierce that neighbours were unable to help save the children.

“The fire was so intense and huge … we couldn’t do anything, that was the most devastating part,” Mrs Deagan said.

Werribee Fire Brigade Lieutenant Damien Milloy said firefighters were told on the way to the blaze that there were likely to be people still trapped in the house.

He said on Sunday that it was initially unsafe for fire crews to access the house with it fully alight, the roof being compromised and tiles collapsing.

“And also, with the distress of the parents and the eight-year-old, it was very difficult to get accurate information early on to be able to focus our search areas initially, externally, and then internally,” he said.

Lieutenant Milloy said there was nothing any of the neighbours could have done to save the children.

With Erin Pearson and Ashleigh McMillan