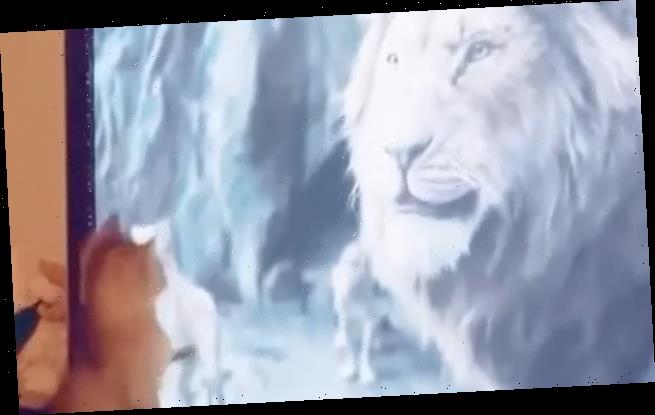 A video has captured the hilarious moment a TV-obsessed cat got spooked while watching Simba threaten old nemesis Scar in The Lion King.

Six-month-old Bruce can be seen standing on his hind legs, inches away from the television screen, in a video shared on Facebook.

‘The choice is yours, Scar,’ Simba growls menacingly. 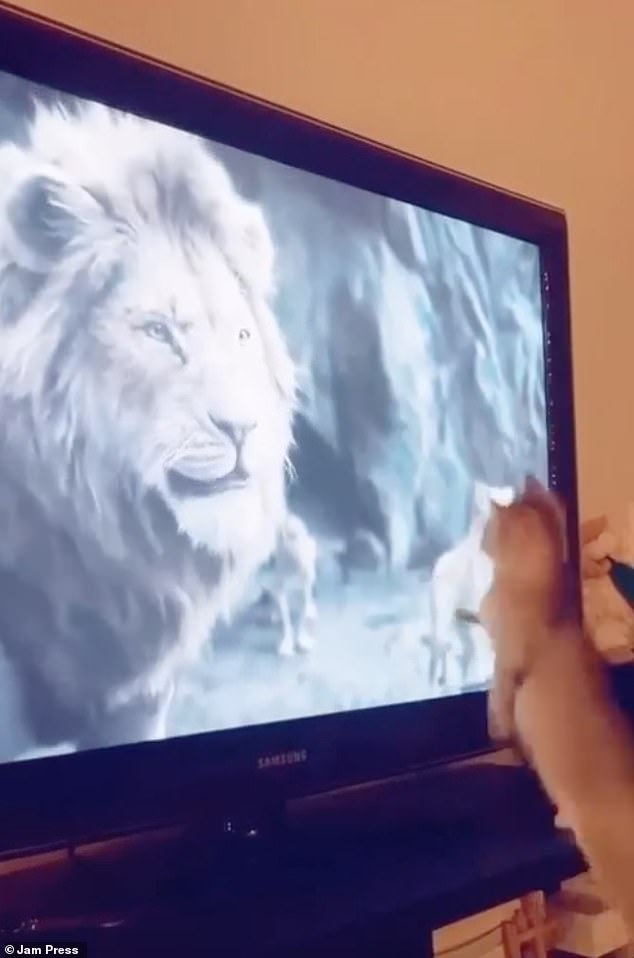 Six-month-old Bruce can be seen standing on his hind legs, inches away from the television screen, in a video shared on Facebook 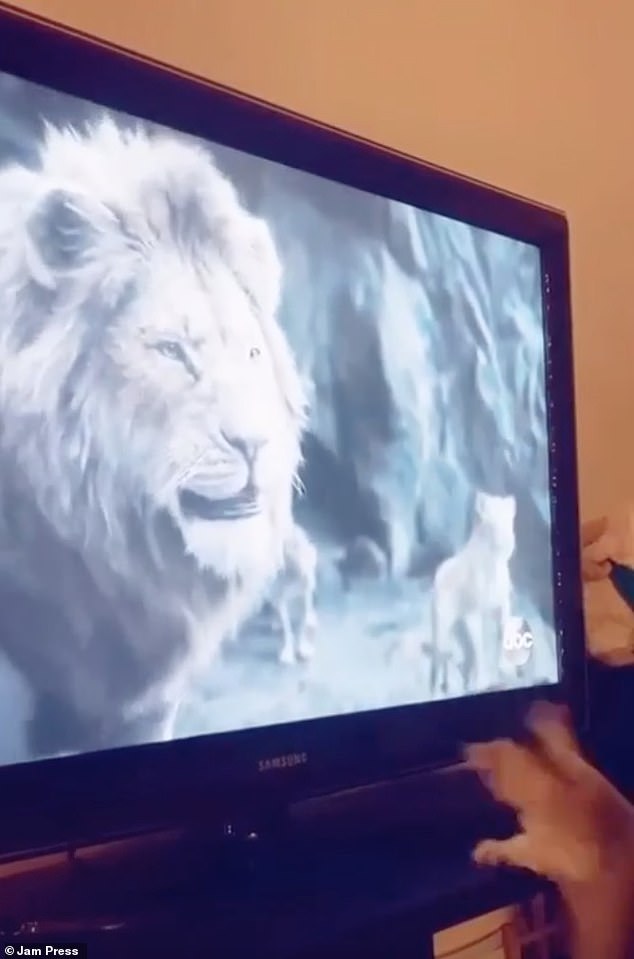 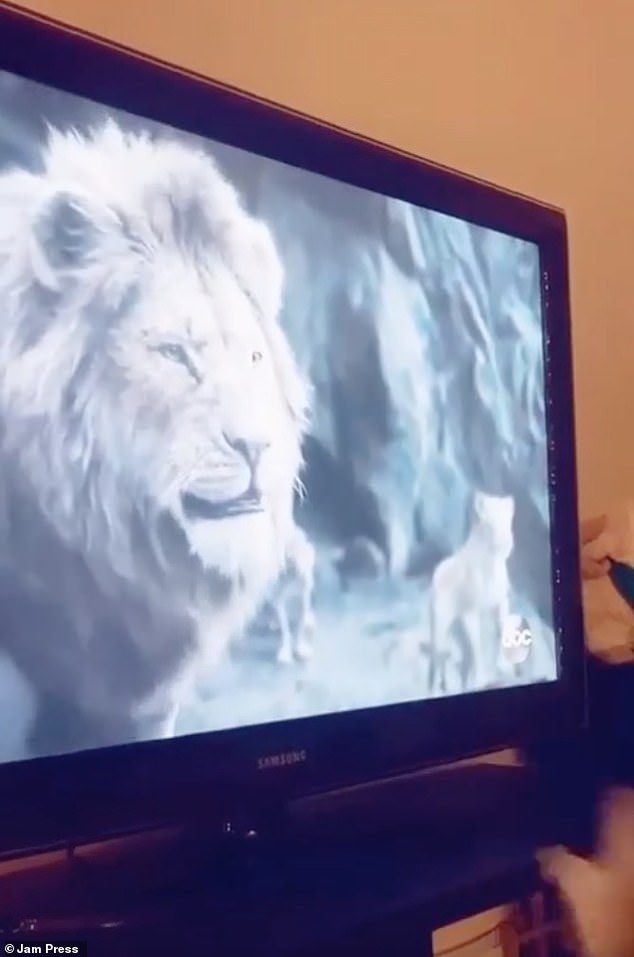 The speech seems to spook poor Bruce, who leaps away in such a hurry that he ends up slipping and crashing head-first into the television unit below.

Off-camera, he jumped back up and continued watching, unscathed.

Bruce was watching the 2019 remake of Disney’s The Lion King with owner Scott Rezende, 43, a dental assistant from Florida.

The cat became part of the Rezende family by chance, having walked through the door one day.

‘I was cleaning one day and had the back door open when Bruce walked into the kitchen. 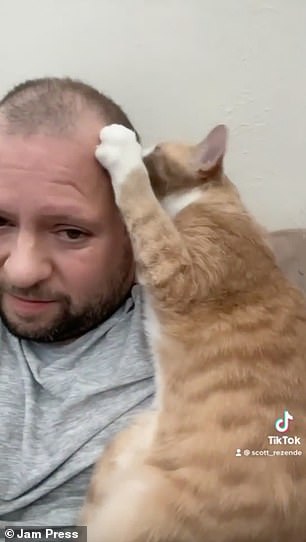 Owner Scott Rezende, 43, pictured, with Bruce, said the cat returned to the TV once the scene was over

‘He decided it was his forever home and never left.

‘Bruce is extremely curious about everything and sometimes jumpy at new things.’

Rezende shared the funny video on Facebook, writing: ‘Bruce got so into the movie that he forgot where he was.’

‘Now that’s hilarious – he was afraid he was gonna get eaten,’ one person joked.

‘Omg, the best thing I’ve seen all day. What a sweet moment – until it’s not,’ another person commented.

Someone else said: ‘I am going to hell because I am laughing at this poor baby so hard – I am truly glad to know he is OK.’

‘Aww, kitto katto got scared by Simba,’ another person commented.

‘I can only imagine what is going on in that cute little head,’ someone else wrote.

When he isn’t watching movies, quirky Bruce loves to ride around on the family robot vacuum and clean his owner’s hair by licking it. 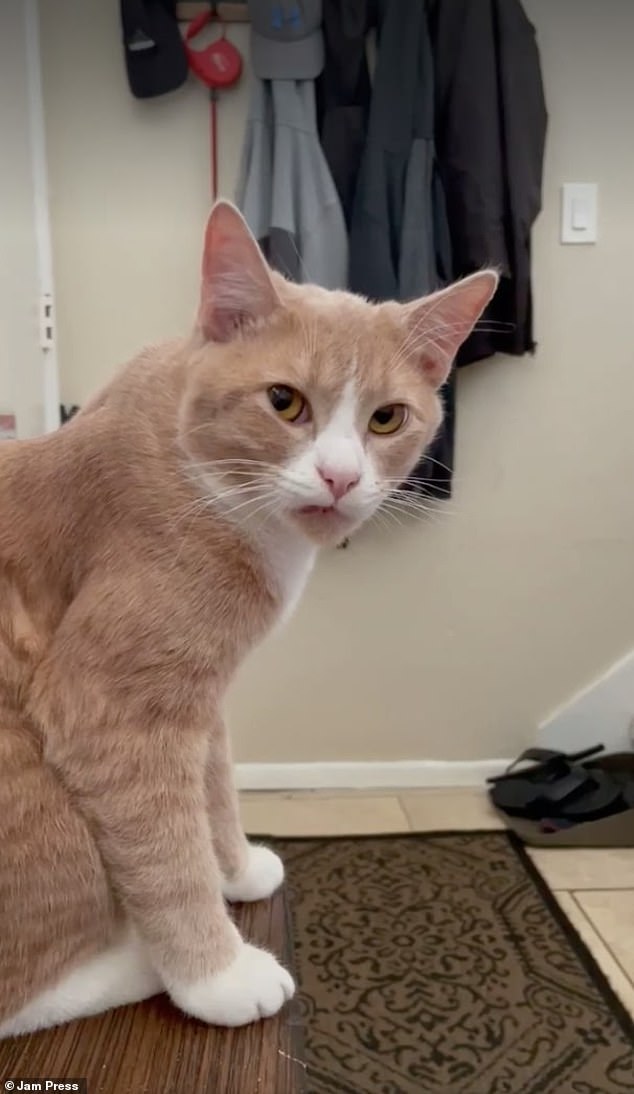 Luckily, Bruce the cat was completely unharmed by the ordeal