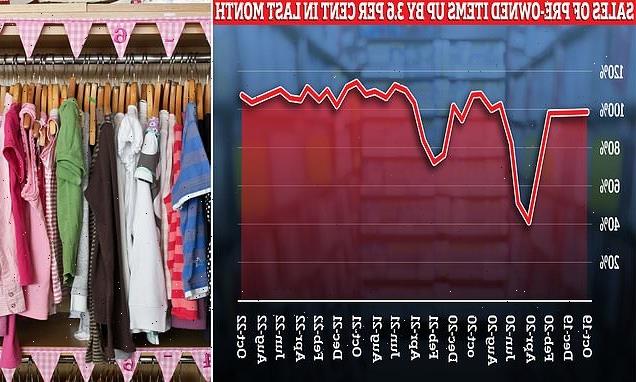 Buying new is so last season! Cash-strapped Britons are increasingly turning to second-hand stores and auction houses to make savings

Cash strapped Britons are increasingly turning to second hand stores and auction houses to make savings, according to official figures.

Retail sales data found the one sector of retailing that is showing signs of major growth are businesses specialising in ‘pre-owned’ merchandise.

Total sales through a category of retailers identified as ‘other non-food stores’ by the Office for National Statistics (ONS) were up by 3.6 per cent in October compared to September.

It said this was ‘because of strong growth in second-hand goods stores – particularly auctioning houses’.

The figures suggest that many Britons are dressing their homes – and their families – by buying other people’s cast offs.

Similarly, it would suggest that many households are digging through their homes and wardrobes looking for items they can sell off to make ends meet. 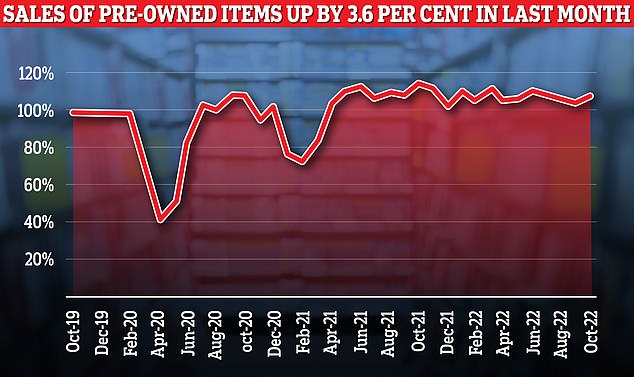 Lead Equity Analyst at investment experts Hargreaves Lansdown, Sophie Lund-Yates, said: ‘In these uncertain times when people’s pay packets aren’t stretching as far as usual, it seems consumers are looking for alternative ways to get their hands on what they want.

‘This trend does point out just how tough things have become though – switching to second hand on this scale is no small shift in behaviour.’

The ONS figures demonstrate that roaring inflation means households are spending more each month, but getting less.

Lisa Hooker, Industry Leader for Consumer Markets at PwC, said: ‘Worryingly, on an annual basis, the 2.9 per cent increase in overall retail sales excluding petrol was accounted for by the record inflation that was reported earlier this week. On a volume basis, shoppers were actually buying 6.7 per cent less than last October.’

Retail experts say the figures show a big drop off in food sales as people buy less and switch to cheaper, budget lines.

‘As we head into the festive trading season there’s a very real chance some of the UK’s big supermarkets are going to be hit hard, with expectations perhaps not living up to reality.’

The Black Friday sales and Christmas trading period are crucial to the retail sector and industry experts are fearful the biggest cost of living squeeze since World War II will deal a heavy blow to their finances. 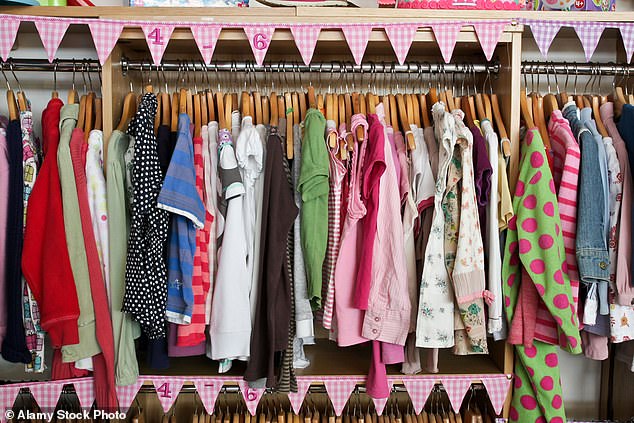 The figures suggest that many Britons are dressing their homes – and their families – by buying other people’s cast offs. (Stock image)

Chief executive of Retail Economics, Richard Lim, said: ‘The overall picture remains tough. With inflation running riot, these figures highlight that consumers are having to spend more but are getting less back in return.

‘Retail sales volumes continue to decline sharply on the previous year as consumers are cutting back, delaying and trading down to cheaper alternatives where they can. This is clearly the case in the grocery sector with the fight to value seeing the discounters gain significant market share.’

He said there is some evidence people who are on a tight budget are happier to trawl high street stores for bargains rather than shopping online.

‘The proportion of spending online remains down on levels seen last year and it seems that consumers feel more in control of their budgets in a physical environment, looking for end-of-aisle discounts and keeping a tighter grip on finances,’ he said.

‘But the rebalance towards stores is also likely to have been driven by avoidance of online delivery costs, an increasing number of retailers charging for returns and the squeeze on budgets discouraging over ordering with the intention of returning unwanted products.’