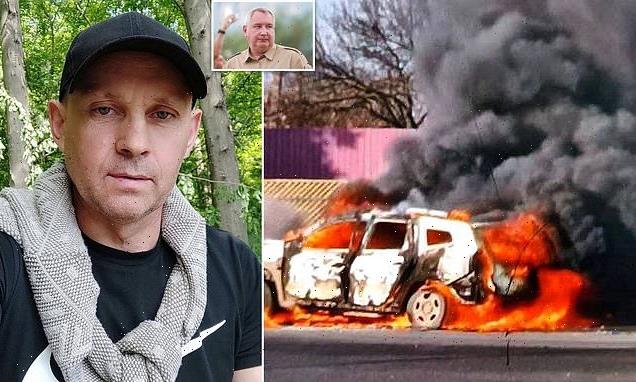 Car bomb assassins have killed a pro-Russian official in an occupied village in southern Ukraine, Moscow-installed authorities said on today.

Andrii Shtepa was killed in a ‘car explosion’ in Lyubimivka in the latest in a series of attacks against Russian-linked officials, and comes as Kyiv claimed Vladimir Putin’s mounting death toll passed the grim milestone of 100,000 soldiers.

A picture posted online purportedly showed the burning wreckage of a car on a street in Lyubimivka village, with thick black smoke pouring into the air. According to reports, Shtepa burned alive in his vehicle.

It was also reported on Thursday that the former head of Russia’s space agency, Dmitry Rogozin, was injured by shelling in Donetsk, a Russian-controlled city in eastern Ukraine. He said he will require surgery for the injury, with some reports online suggesting he was struck by shrapnel in his buttocks. 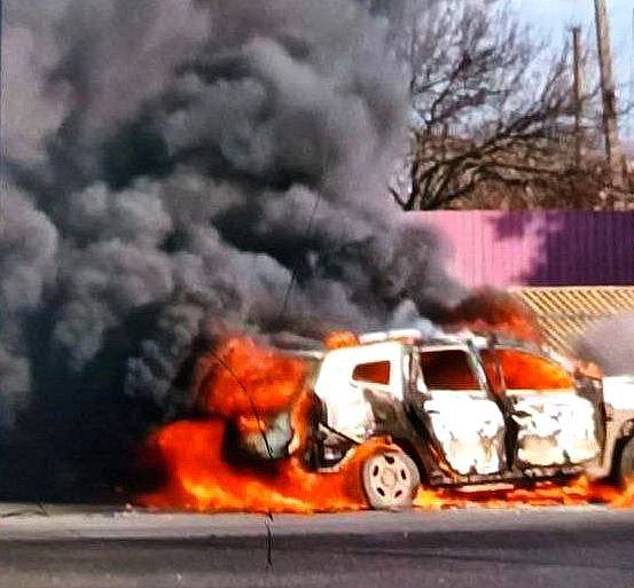 A picture posted online purportedly showed the burning wreckage of a car on a street in the village of Lyubimivka, with thick black smoke pouring into the air. According to some reports, village leader Andrei Nikolayevich Shtepa burned alive in his vehicle 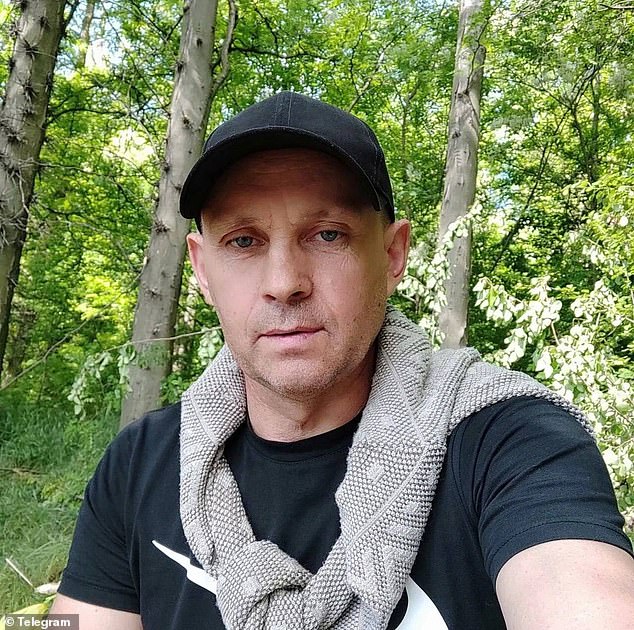 According to Ukrainian website ‘Life of War’, Russian-born Shtepa was appointed the head of Lyubimovka village on July 18. It says he was born in Russia, but had been living in Ukraine

According to Ukrainian website ‘Life of War’, Russian-born Shtepa was appointed the head of Lyubimovka village on July 18. It says he was born in Russia, but had been living in Ukraine for a ‘long time’ before the invasion began in February.

It says he had been a local resident for the last 15 years, and that he worked on a local communal farm. It also notes that he ‘unsuccessfully ran for the post of village head’ in the past, before the Russian occupation.

‘Today Andrei Nikolayevich Shtepa, a sincere patriot of his native land, died tragically as a result of a car explosion,’ pro-Russian authorities said on Telegram, blaming ‘Ukrainian terrorists’ for the man’s death.

Russian news agency TASS also reported that Shtepa had been killed, citing a source from the local emergency services in the Kakhovka region.

‘He died, explosives were planted in the car,’ the source told the agency.

Ukrainian news website Censor.net called Shtepa a ‘traitor’ for his part in the Russian occupation of the village, and also reported that his death was confirmed by the Strategic Communications Center of the Armed Forces of Ukraine. 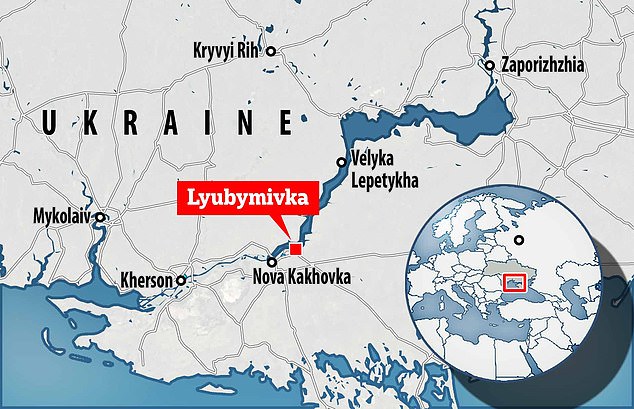 Lyubimovka is located on the eastern side of the Dnipro river, which has been under Russian occupation for months

It claimed Shtepa had conflicts with locals, and would show the Russian occupiers who lived where in the village.

Lyubimovka is located on the eastern side of the Dnipro river, which has been under Russian occupation for months. Moscow’s troops have been stationed there after they retreated from Kherson city last month rendering the river a new frontline.

The region is on the front lines of the on-going conflict, with Ukraine having made significant gains in the region in recent months.

Meanwhile, the former head of Russia’s space agency, Dmitry Rogozin, said on Thursday that he was injured by shelling in Donetsk, and will require surgery.

Rogozin is an ardent supporter of Putin’s February offensive in Ukraine and is leading a team of military advisors to pro-Russian forces fighting alongside Moscow’s troops.

The outspoken official – known for his Twitter spats with US billionaire and SpaceX CEO Elon Musk – was removed from his position at Roscosmos in July.

Rogozin said on his Telegram channel Thursday that he suffered a back ‘injury’ after a metal fragment was lodged above his right shoulder blade and will be needing surgery. Other reports online suggested he was struck in his buttocks.

The incident took place on Wednesday evening in a hotel in Donetsk, where Rogozin was staying with a local official and a group of advisors, TASS news agency reported. 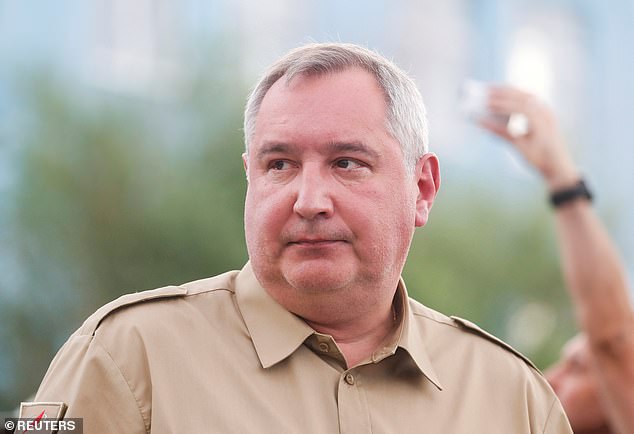 The former head of Russia’s space agency, Dmitry Rogozin (pictured) said on Thursday that he was injured by shelling in Donetsk, and will require surgery 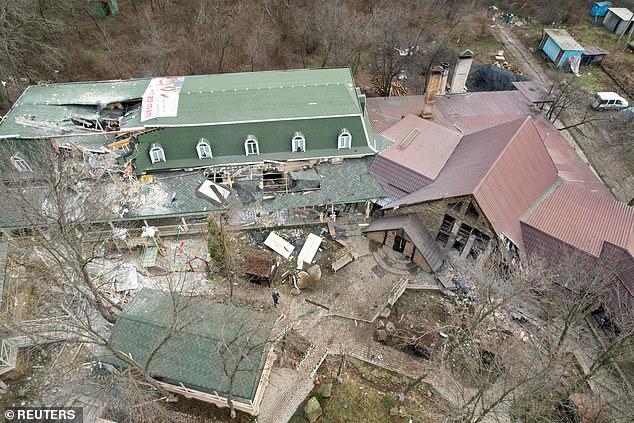 An aerial view shows the damaged restaurant Shesh-Besh located in a hotel, where people including Rogozin were injured in a ‘precision’ strike 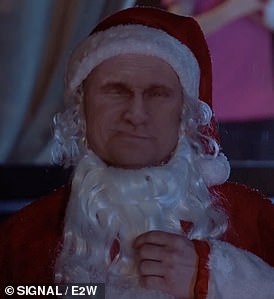 Russian investigators said that the strike, which had left others dead and injured, was carried out with ‘high-precision munitions, presumably… a Caesar’ French artillery system.

Rogozin said the incident took place during a ‘work meeting’ in the restaurant of the hotel, while Russian state news channel Rossiya 24 TV said the former space chief was celebrating his 59th birthday.

The channel broadcast images of the heavily damaged hotel and restaurant with parts of the roof destroyed and debris scattered around the rooms and outside in the garden.

Rogozin said he had regularly stayed in this hotel during trips to the Donetsk region, which Russia claimed to have annexed in September along with three other Ukrainian regions, despite widespread condemnation from the West.

‘These are business trips by officials, it’s quite normal for officials to go to Russian regions,’ Kremlin spokesman Dmitry Peskov told reporters when asked about the incident. ‘Unfortunately, staying in some areas is still dangerous… but that does not mean that it should prevent officials from performing their duties,’ he added.

The bombing is the latest in a series of targeted attacks against Russia-installed officials in occupied areas.

These included a blast that killed Oleg Boyko, the deputy head of the Russian-installed administration in Berdyansk, and his wife Lyudmyla who headed the electoral commission preparing for the so-called annexation referendum.

In September, the Lugansk separatist administration’s top prosecutor and his deputy were also killed in an attack.

In September Moscow claimed to have annexed the four Ukraine regions of Kherson, Donetsk, Lugansk, and Zaporizhzhia despite never fully controlling them. Their annexation has been widely condemned by the international community.