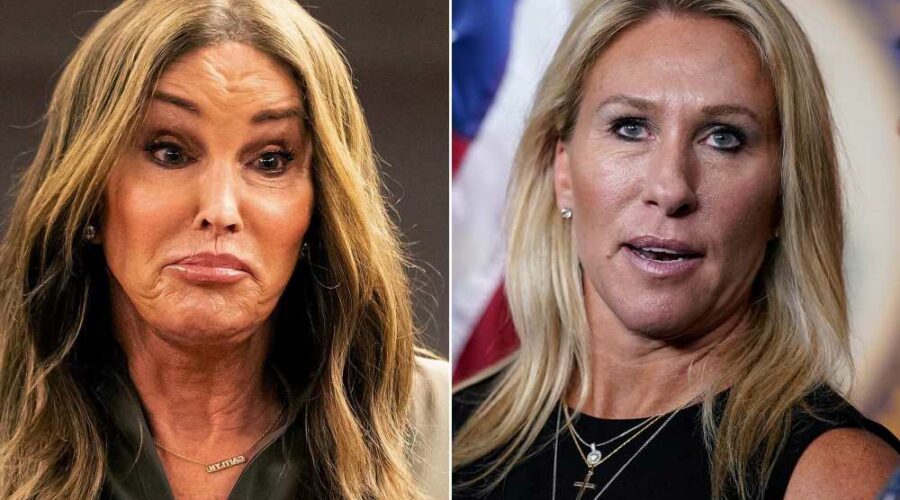 Caitlyn Jenner: California immigrants should have path to citizenship

California GOP gubernatorial hopeful Caitlyn Jenner called out Rep. Marjorie Taylor Greene for the settlement she paid to a “Twitter troll” now being donated to organizations that support gun control, after the controversial Georgia Republican attacked her on Twitter.

Jenner’s clap back came in the wake of Greene calling on Republicans to withhold their support for the transgender reality star and former Olympian — with Greene referring to her as a “man in a dress & NEVER-Trumper.”

“GOP support & consultants working to elect Jenner for Governor in CA are playing the left’s stupid identity politics game. A game that sells out our faith, family, and freedoms. Stop promoting this man in a dress & NEVER-Trumper. CA Patriots worked too hard & deserve better,” Greene tweeted on Monday.

Jenner, who launched a long-shot bid to unseat Democratic Gov. Gavin Newson in April, dismissed the criticism, noting Greene opted to settle the lawsuit launched against her by Los Angeles-based political action committee MeidasTouch LLC, paying $10,000 for legal fees and agreeing not to block critics from her public Twitter account and other social media platforms in March.

Greene tweeted shortly after the settlement that the organization was “bragging about donating the money to organizations that want to take away my guns,” which Jenner highlighted in her tweet pushing back on the insults launched against her.

“Tough talk coming from someone who backed down to the woke mob and settled out of court with a Twitter troll,” Jenner tweeted. “Now your money is being used to take guns away from law abiding Americans.”

While Greene made anti-trans comments in her tweets and Jenner faced verbal attacks during an appearance at the Conservative Political Action Conference over the weekend, conservative media personality Tomi Lahren was quick to voice her support for the former athlete.

“The attacks on @Caitlyn_Jenner are despicable. I’ll go to bat for her every single time and if you want to take my ‘conservative’ card for it, take it and shove it. Your mob is no better than the Left’s and in fact, it’s uglier,” Lahren tweeted.