This is the shocking moment a British ex-pat policeman in the Hong Kong riots orders a junior officer to shoot tear gas at a protester.

The politician – Wu Chi Wai – claimed he had been targeted by Shave and his men and would be making an official complaint over what he called their ‘brutal’ behaviour.

Mr Wu said: ‘There was a gap of about 100 metres between the crowd and the police. I went into the zone because I wanted to talk to the commander and urge them to let the crowd disperse.

‘But when I had walked about 10 metres, the first tear gas bomb landed next to me. I was angry and went forward asking to speak to the commander. I was no threat to them. I was on my own. But they fired tear gas a second time.

‘I will be making an official complaint because it seems to me the senior commanders made an order to use excessive force. To me this action against people was pre-planned because there was brutal power.’

It comes as two more British ex-pat police officers have been accused of leading a tough crackdown during the Hong Kong protests.

Chief Superintendents David Jordan and Rupert Dover were two of the most senior officers in charge of crowd control during the ugly riots.

Footage has emerged of riot police beating protesters during pitched battles with police in the former British colony. 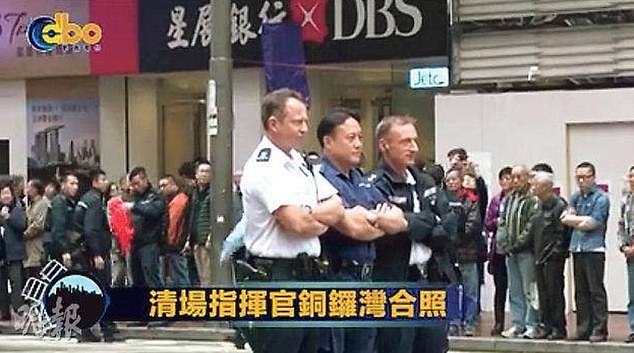 Chief superintendent Rupert Dover (left), who worked with British police for three decades, is understood to have led the front line police unit around the Legislative Council during the clashes 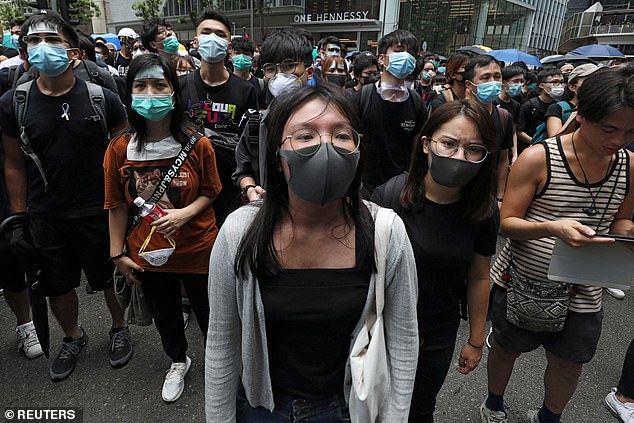 Protesters pictured outside the police headquarters in Hong Kong during a demonstration. Three British ex-pat officers have been seen helping authorities to suppress the riots

Jordan, a former Royal Navy officer who has served with the Hong Kong police force, is the head of the Special Tactical Squad, which was created in 2014 to deal with riots and protests.

Dover, with the force for three decades, is understood to have led the front line police unit around the Legislative Council during the clashes.

One ex-pat officer, who did not want to be named, said: ‘It is very easy to put out negative images of us doing stuff that is hard to explain in isolation.

‘But you need to see the context, which was our men coming under attack, getting pelted with bricks after the protesters charged against our line.

‘We said ‘We are not going to sit here and take this’ and that is when it kicked off. If this were the Senate or the Houses of Parliament you will have police defending them.’ 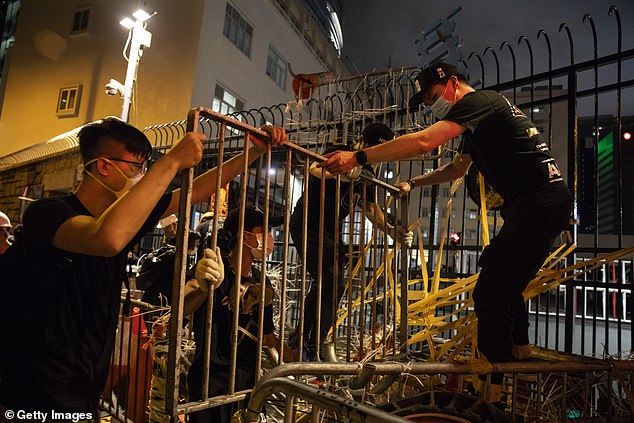 Protesters are pictured creating a barricade to block the police headquarters in Hong Kong on Friday. An ex-pat police officer said it was very easy to put negative images out about what they were doing but that viewers ‘needed to see the content’ 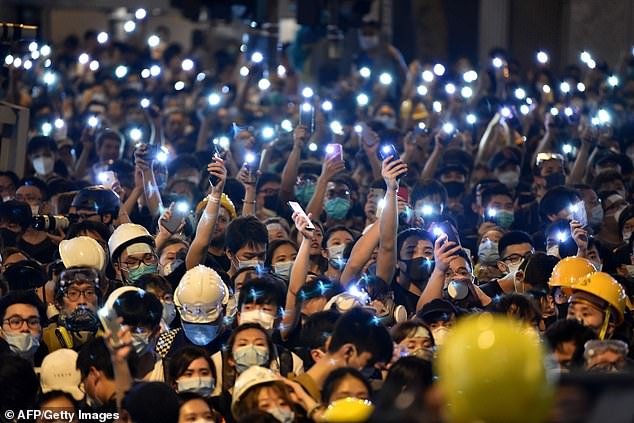 The ex-pat officer added: ‘Dover and Jordan have been vilified because of what happened 5 years ago. They are aware of the negative social media but their attitude is ‘f*** it, we will carry on doing our job.’

‘As police we have a job to do. These two guys have a track record of sorting things out.’

The mass protests that have hit Hong Kong in the past week were sparked by the government’s determination to push through an extradition bill that would allow people to be sent to mainland China for trial.

City leader Carrie Lam announced that her government would suspend the unpopular extradition bill, which people feared could be used to target democrats in Hong Kong.

More than a million protesters walked the streets peacefully but in the wake of the march, several hundred activists tried to storm the Legislative Council leading to pitched battles.

When Carrie Lam and the Hong Kong Government refused to back down another march was called for Wednesday, which descended into some of the worst violence seen since Hong Kong was handed back to China.

Dover, Jordan, Shave and the Hong Kong Police Force were approached for comment but did not respond.