Brazil became the second country to reach four million cases of coronavirus last night amid hopes that infections are starting to slow.

On Monday, average daily cases fell below 37,000 for the first time since mid-July, raising hopes that the pandemic has finally peaked.

However, the average has since risen above 40,000 again and medical specialists say the improvement is ‘very timid’. 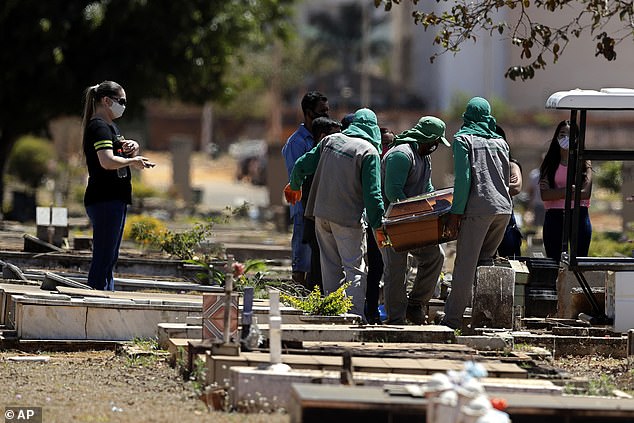 Cemetery workers carry the coffin of coronavirus victim Luzia Santos, 82, at the Campo da Esperanca cemetery in Brasilia on Thursday

However, India is now seeing the world’s fastest growth in cases and is poised to overtake Brazil’s infection count in the coming days.

Brazil reached a million cases on June 19, and the tally had doubled to two million 26 days later on July 16.

The three-million mark was reached 23 days later, on August 8 – but the rise to four million has taken slightly longer at 26 days.

Paulo Lotufo, a professor of epidemiology at the University of Sao Paulo, said the numbers suggest that Brazil could be on the verge of improvement.

‘In the last two months, we have seen a curve that mixes regions that are increasing, with others that are decreasing,’ said Lotufo

While infections have spiked in in the south and west, they are falling in the cities of Sao Paulo and Rio de Janeiro as well as in the north, he said.

‘This is the beginning of what we hope is in fact an improving trend,’ said Mauricio Sanchez, an epidemiologist at Brasilia University.

However, he warned the trend was ‘very timid’ and said the slowdown in cases should be maintained for two or three weeks to be able to draw any firm conclusions.

In such a vast country the national curve could be skewed by what was in effect ’27 different epidemics,’ he said, referring to Brazil’s states.

The state of Sao Paulo has piled up 838,000 cases on its own, more than most countries, while the region around Rio has 230,000 infections.

There has also been untold damage to indigenous peoples in the Amazon rainforest, who have a history of vulnerability to outside diseases. 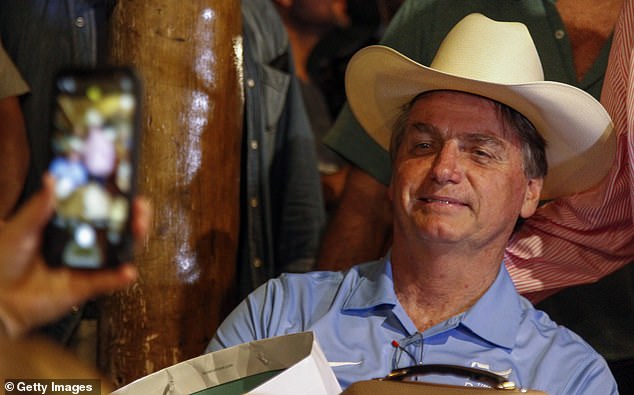 Brazil’s right-wing president Jair Bolsonaro, pictured at a restaurant on Thursday, has played down the pandemic and scorned social distancing rules

Brazil confirmed its first case of the virus on February 26, a Sao Paulo businessman returning from a trip to Italy. It recorded its first death on March 16.

Experts say that unlike in Europe where the virus surged and then subsided, Brazil’s outbreak has advanced at a slow but devastating pace.

Brazil is unique in the world. Since the start of the pandemic, its curve has been different from other countries’, much slower,’ Christovam Barcellos, a researcher at public health institute Fiocruz, told AFP.

Experts warn the situation could suddenly worsen again if local and regional governments re-opened the economy too quickly.

Last Sunday, the beaches of Rio de Janeiro were crowded with people without masks.

Many Brazilian cities are currently studying how and when to reopen schools, while many bars, restaurants gyms and churches are already open again.

Brazil’s strategy for dealing with the virus has been a highly political matter because president Jair Bolsonaro has repeatedly downplayed the crisis and raged against lockdowns that regional leaders imposed against his will.

Like Donald Trump, he has touted the unproven anti-malaria drug hydroxychloroquine and used it on himself.

Bolsonaro claimed again on Saturday that the controversial medication had ‘saved thousands of victims’ lives’ in Brazil.

Bolsonaro has also rallied with supporters in defiance of social distancing rules, and twice changed his health minister after disagreements over the pandemic.

Brazil has suffered a record contraction of its economy, and the loss of nine million jobs.