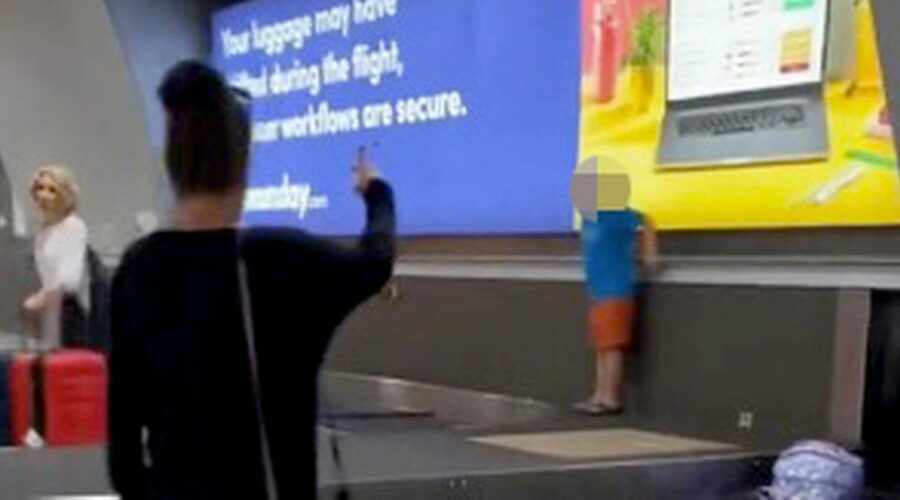 A young boy has thrown an airport into chaos when he jumped on a moving carousel and threw luggage on the ground.

Stunned tourists at Melbourne Airport in Australia watched in disbelief as they watched the child running on the baggage carousel while a woman came yelling at him.

In a video filmed by a fellow traveller, a woman in black long dress said to the boy: "Get off, get off now! I'll come up here and get you."

But the child defiantly responded: "No, you won't."

He then sprinted to another end of the carousel and dragged a blue suitcase onto the floor before a woman came to claim her bags.

The kids antics were soon made aware to the airport staff and an announcement was made over the PA system in the hall.

A female worker said: "Hi everyone, can the parents please control that child that's going around on the carousel number 4? We have police and security coming to talk with you.

"Please get your child off the carousel, thank you."

The video ended when a few adults walked over to talk to the boy, trying to get him off the moving belt.

The woman in black dress commented on the video and clarified that she's not the boy's mother, adding: "I was travelling with my partner and daughter. The boy is actually with three child protection carers."

Viewers shared their thoughts on the incident and praised the staff's swift act on telling the boy off.

"The speed which he put his shoes back on when he heard 'the police are coming'," one noted.

A second commented: "Wouldn't listen to his mum but when the lady on the speaker said police were coming, he listened real quickly."

"My south-east Asian mum would have ended me before I had the chance to step on the carousel," a third added.

A spokesperson for Melbourne Airport said: "The safety of passengers and staff is paramount.

"Anyone climbing onto baggage carousel risks causing themselves serious injury."